The faction-based society that Tris Prior once believed in is shattered—fractured by violence and power struggles and scarred by loss and betrayal. So when offered a chance to explore the world past the limits she’s known, Tris is ready. Perhaps beyond the fence, she and Tobias will find a simple new life together, free from complicated lies, tangled loyalties, and painful memories.
But Tris’s new reality is even more alarming than the one she left behind. Old discoveries are quickly rendered meaningless. Explosive new truths change the hearts of those she loves. And once again, Tris must battle to comprehend the complexities of human nature—and of herself—while facing impossible choices about courage, allegiance, sacrifice, and love.
Told from a riveting dual perspective, Allegiant, by #1 New York Times best-selling author Veronica Roth, brings the Divergent series to a powerful conclusion while revealing the secrets of the dystopian world that has captivated millions of readers in Divergent and Insurgent. 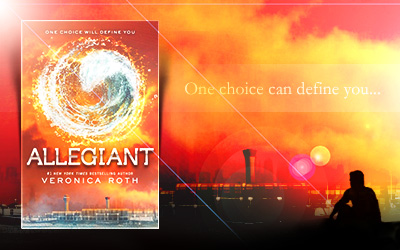 Note: The review itself does not contain actual spoilers, but the feel of it and the graphics & media might spoil it for you quite a bit. Please don’t read it if you haven’t read the book yet.

To say that this book is my favourite in the series is an understatement. It took my breath away, I loved every single word of it and so when the ending came it broke me to pieces. I read the last pages with tears in the eyes.

I’ve had a love & hate relationship with this series, enjoying the first book, not so much the second one, but Allegiant for me was by far the most exquisite.

The title seems to be perfect, as Veronica Roth defines “Allegiant” as “one who is loyal or faithful to a particular cause or person“, and this tells a lot about this story and the main character.

I’ve lost a piece of myself reading this story, a piece that I won’t ever get back – but am I happy about it? Yes I am. Because loving something as much as I love this series now is worth everything – even the heartbreak. And you don’t  know the feeling I get when I look back and I realise that even though maybe I didn’t like some stuff in the series while I read them, by the ending they were all only pieces in a puzzle so big and great I just can’t put into words how in love I am with it as a whole.

This book made me think a bit: not to let pride in front of my happiness, to enjoy every moment because I might never know if I’ll get another chance, to forgive and forget the bad things and focus more in the future.

It’s sad really, I keep thinking of Tris and Four, of the missed chances and the moments ruined by fights and mistrust. There were so many moments lost by pride and anger and, you know, they had the right to be hurt but they didn’t have the right to be mean to each other. I get it: that’s the whole point here, but still, it’s so very sad. 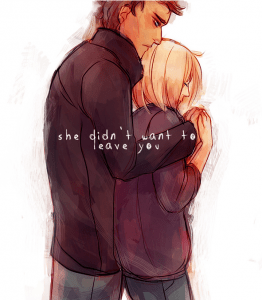 During this book I started to reconnect with both Tris and Four, to understand their insecurities, to see the broken pieces in their souls. They were by no means perfect (even though Tris thought so highly of herself and, after all the stupid things she did in the previous books, it rubbed me the wrong way to watch her being right at all times in Allegiant and throw this in the face of everyone who ever made mistakes). They had the past to press on their shoulders, the uncertainty of the future to scare them and the madness of a present that was nothing like they hoped it would be.

As a side note, I think that there might have been way too many rebellions in this series… yep, too many. But somehow I still liked it, because Allegiant was in this way filled with action and the characters had to make decisions at all times and the outcome was different and leading to new places (physically or emotionally)  –  I liked that.

It aches all over my heart. Letting go of this story felt like losing someone (real), but the taste is bittersweet – I kept thinking about this story, about this book and -like with Champion- I couldn’t see a better way for it to end. (And yeah, that might not be a good example for waaaay too many reasons, there’s no actual comparison between the books (or the endings, as they are as different as they can even be), it’s just this feeling of ‘rightness’, of closure of sorts, like things were meant to happen in such way. And don’t kill me if you didn’t feel the same, this is simply how I feel).

Anyways, I don’t want to spoil it or not too much, many people will read ‘about‘ this book before reading ‘it‘ and they won’t be able to feel the same emotions, which is a shame. I would erase it from my mind and read it again for the first time if I could. I am aware that many of you didn’t love Allegiant as much as I did, but that’s beside the point, as with the good and the not-so-good I did enjoy this book, a lot even, and this makes me very happy.

This being said.. Happy midnight reading!