Not That Kind of Girl

Natalie Sterling wants to be in control. She wants her friends to be loyal. She wants her classmates to elect her student council president. She wants to find the right guy, not the usual jerk her school has to offer. She wants a good reputation, because she believes that will lead to good things.
But life is messy, and it’s very hard to be in control of it. Not when there are freshman girls running around in a pack, trying to get senior guys to sleep with them. Not when your friends have secrets they’re no longer comfortable sharing. Not when the boy you once dismissed ends up being the boy you want to sleep with yourself – but only in secret, with nobody ever finding out.
Slut or saint? Winner or loser? Natalie is getting tired of these forced choices – and is now going to find a way to live life in the sometimes messy, sometimes wonderful in-between. 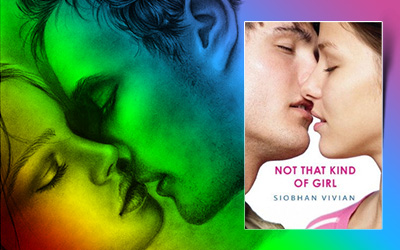 This book was as beautiful as the cover. I loved it!

“You see, the best thing about wrong decisions is that they don’t prevent you from making the right decisions later on. It’s harder, but it’s not impossible.”

I’ve been waiting to read this book from the moment I first saw the cover. Look at it. Isn’t it beautiful? Not only the girl and the boy (they are cute), but that precise moment.

In my opinion this is one of the best moments in life (not as great as for example, holding your baby in your arms for the first time, but anyways you get my point).
It’s one of those moments that fills your heart with joy and anticipation and in every cell of your body you feel that you are alive.

Try to imagine that moment for a second… Try to go back in time before a first kiss (or imagine one), try to think about what would you feel in that moment.
It is the insecurity that makes it perfect.. there are so many options from there, so many possibilities for things to happen (or not to happen), and not knowing what’s next makes you take the risk. It’s that second when you hold your breath and your heart skips a beat, and you feel that you are in the best possible place on Earth.

Now about the story
I think that the cover fits the story perfectly.
First – because the book is full of moments when things are about to change completely. Every now and then the story unfolds up to one point when you hold your breath waiting for the characters to make a decision and wondering what the consequences of their act might be…

Second – because the story is also romantic, and Natalie and Connor seem to come back to the same moment when they are “a kiss way from each other”, so close but in the same time so far away.

After reading the reviews on goodreads I thought that this book would be similar to The DUFF (not that this would’ve been a problem for me), but in fact I couldn’t find many similarities between the 2 of them. Also this book was more about friendship and finding your way in life, than losing control (as I initially thought). Yes it got to that point near the ending, but the journey was the important part.

I found the characters to be nicely defined (most of them anyways). I liked Natalie and of course Connor, but also I liked Autumn and Spencer a lot. They all believed in friendship, and even if there were lots of problems throwing them apart form time to time, they knew how to come back, to say “I’m sorry”, to be a great friend when someone needed them.

The love story between Natalie and Connor felt realistic too.
It was nice that the author took the time to introduce us to Natalie first and her friends, and only after that she let us know Connor. In this way we knew exactly what Natalie thought about love and boys and responsibilities, and control (of course) and I could understand her actions, her feelings, her fears.

Natalie
She was one of those people that keeps for herself. She didn’t have many friends, she didn’t like to party (in fact she never even tried), she took school and other things way to serious and tried to be perfect.. but perfect for whom?

It was strange to see her totally in control one moment and totally losing it in the next one. I even had a tiny problem with this because I don’t think that having a boyfriend should’ve affected her so badly (not that she would accept that Connor was her boyfriend, but he kind of was).
Trying to be in control she kept hiding her emotions and feelings, she kept seeing him at night, losing sleep, she kept thinking about him and their relationship affair and she only made it worse. It would have been better just to enjoy her romance for once and take the risk, but no, she wanted to have everything planned, and love wasn’t on the list.

(and I don’t really know if the lesson “sticking your nose in other people’s business can get get you into big trouble” is something that she understood completely, but I think that she is now a little more familiar with it as well)

Connor
Even though we don’t get to know him that well, I really liked him from the beginning.
I liked his confidence.You know why?
Because generally speaking, if you really think that you can do something you will always be able to achieve it not matter how hard it might seem to be; because it takes a lot of confidence to be the person you want to be and I appreciate those people who doesn’t lose their way trying to be someone else.

We don’t know much about what he wants in life, but we know that he wants Natalie (I meant it in a good, romantic way, but yes – also in a physical way – it comes in the same package with sleeping in someone’s arms, kissing and touching all night), and even if she thought that she was always in control he got straight to her heart (and he knew that).

As a side note: You’re never in control when you start to care about someone, but that doesn’t mean that you have to feel bad about it… and after all, from time to time is good to lose it for a while and just enjoy your life without being scared.

Also I liked the way he tried to get closer to Natalie step by step, breaking her guard, trying to understand her, trying to help her, trying to be there for her. It was not an easy task because she was damn difficult, and unpredictable (not in the best possible way), but he really tried and I give him credit for that.

Autumn
I really got to care about her. She was the only one that had to suffer because of someone else’s fault.
If you think about it, she didn’t do anything wrong, she fell in love and tried to take it easy. But that was just bruising someone else’s ego and she got caught in the middle of a high-school drama without having a word in it. Also, being protected by her best friend was never a good choice, because she and Natalie didn’t share the same dreams. They had different perspectives in live – Natalie wanted to be a good student, the president of the school council, Autumn wanted to have fun, she wanted people to forget about the incident and just let her be.
I couldn’t blame her for wanting to keep her distance from Natalie when she realized that she wanted more from life and it wasn’t that hard to do it on her own.

Spencer
She is the opposite of Natalie in terms of actions, but they are so alike in so many other ways.
If you want to put these 3 friends together and compare them, Autumn would stay in the middle and Natalie and Spencer on the opposite sides.
Spencer was smart (even though she did quite some stupid mistakes) and she knew how to have fun all the time, and, of course, she also thought that she was always in control. She took another path (so different from Natalie’s) but the result was the same: she had to learn her lesson in the hard way.
But she was a good friend, and I liked the fact that she tries to help Natalie when she could (if it wasn’t against her own believes)

SO, all in one, messing up with someone is never a good thing to do, because every single time someone gets hurt.. and it hurts even more when you are the one. I think that if people would just mind their own business this world would be a better place.
Also I think that we all need to love and be loved, but a little bit of pride won’t hurt.
You need to know what’s really important in life, what defines you, and you need to be yourself (because, you know, everyone else is taken).

It’s hard sometime to be a teenager, but it is a beautiful time to remember 🙂

NOTE: To keep the review spoiler free I had to take down some parts of it.
Go to my goodreads review page to view the full review.

4 responses to “Not That Kind of Girl”