Humans and androids crowd the raucous streets of New Beijing. A deadly plague ravages the population. From space, a ruthless lunar people watch, waiting to make their move. No one knows that Earth’s fate hinges on one girl.
Cinder, a gifted mechanic, is a cyborg. She’s a second-class citizen with a mysterious past, reviled by her stepmother and blamed for her stepsister’s illness. But when her life becomes intertwined with the handsome Prince Kai’s, she suddenly finds herself at the center of an intergalactic struggle, and a forbidden attraction. Caught between duty and freedom, loyalty and betrayal, she must uncover secrets about her past in order to protect her world’s future. 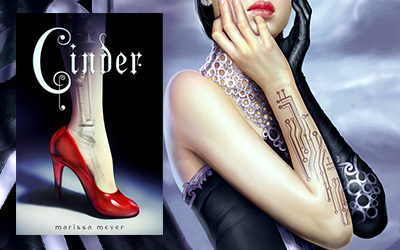 Do you believe in love at first.. read?

From time to time I like to read a fairytale – about princes (on white horses) and princesses (in their beautiful castles) and lost slippers and magical kisses that lead to happy endings.

But don’t be fooled, as this is no fairytale.. Still this is one of the most original retellings I’ve heard about and it really reinvented that notion for me. It was absolutely mesmerising!
Disney stories be damned, I want this on the big screen!

This being said I am late at this party. I’ve shamelessly postponed reading it for a whole year, but now that I see what the fuss is about I can only be happy that I have less to wait for the next book. (*Psst pssst, don’t let anyone know, but I’ve been beating myself for not picking it up sooner*)

Some stories feel like dreams – they slowly creep into your mind and leave an imprint on your soul. They make you believe the unbelievable, they take your breath away and they lead you to unimagined wolds full of mystery and beauty.

“Vanity is a factor, but it is more a question of control. It is easier to trick others into perceiving you as beautiful if you can convince yourself you are beautiful. But mirrors have an uncanny way of telling the truth.” 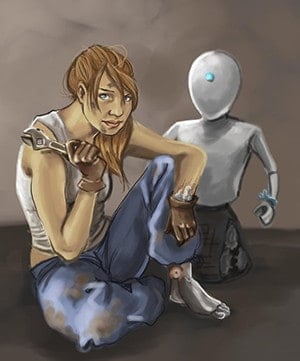 And so I fell in love with ‘CINDER’. I am not sure when or how…
It was all in the main characters – so genuine, so sweet, so realistic in this fantastic and futuristic world. It was in their pain, their struggle, in their hearts. It was in the wish to make their dreams come true, to save each other, to hope for better days, to forget who they are or what they are meant to be.
It was in the world itself, so complex and magical (I repeat, in a futuristic kind of way). I was amazed by the creativity of the author and how easily I could see it all before my eyes. If only I could reach into it and spend a few moments with these characters, if only I could be one of them. *sigh*

I cared for Cinder, I felt her pain – it hurt to see how little people thought of Cyborgs, never taking into account the fact they were half human too. It hurt to see how Cinder’s family treated her, but even more it hurt to witness her friendship with her step-sister Peony, more even after reading the first novel (which I will soon review). The coldness of the step-mother, the sweetness of her best friend Iko (which happened to be an android), the cuteness of her relationship with prince Kai, the horrors which awaited for her and the ones from her past, her trying to make things right when they turned terribly wrong… All these added to the beauty of the story and I loved her strength, her courage, her determination. She was broken, but she was never weak; she was defeated but she never lost hope. She was beautiful behind all those scars – after all she got Kai’s attention.

Clearing his throat, Kai murmured, “You have no idea how to dance, do you?”
Cinder fixed her gaze on him, mind still reeling. “I’m a mechanic.”
His eyebrows raised mockingly. “Believe me, I noticed. Are those grease stains on the gloves I gave you?” 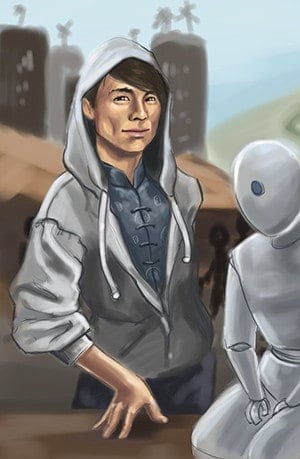 Kai is a very interesting character. To be honest, through the story we don’t get to know him just as much as we know all the other characters, but there’s quite enough for a girl to fantasise over. We get to know how caring he is, how confused and hurt and in need for something of his (a decision that could belong to him only, a feeling that he wouldn’t need to keep hidden). All he wants is to be free – free of his pain for the loss of his family, free of his responsibilities for saving his people and maybe the whole humanity. There is just too much resting on his shoulders and we will see that love will not set him free, like the songs say. Or at least not just yet.

Reading SCARLET right after CINDER makes my brain run in circles, it’s hard to keep focused on this story alone. But it’s also good because I see how consistent the story really is. How truthful to themselves the characters are through the whole story, how actions from the first book might lead to important developments in the next one.

I don’t think there was one character that I didn’t like. Of course, there was the evil Lunar Queen and the awful step-mother but they were wonderful in their meanness. They set things in motion, they made the characters grow through the story, they made them stronger, brighter, they made me love the other characters even more.

The book was not only full of action, world building, character development and awesome plot, but there was also a good dose of humour. And I can’t say I am usually a fan of retellings (as I am actually not), but this one was amazingly great and it stands out between all the others (and I could bet that there are many out there). Not to mention that the covers are incredibly beautiful – not only the one for CINDER, but all of them.

So, this being said, I loved the story and I can’t wait to tell you more about the new characters from SCARLET now.
Keep close, that review is on its way!

It just makes me think of this book 🙂

And a new Cinderella movie:

Not related to this book, unfortunately, but just as lovely.. Well, I hope, as it’s not out yet 🙂