First book in the “Across the Universe” series.
As the spaceship Godspeed travels toward a new earth, the lives of 100 cryogenically frozen settlers hang in the balance after someone endeavors to quietly murder them. The other passengers aboard the ship have never known life outside its walls and are enslaved by the machinations of Eldest, their tyrannical leader, who divides them into three distinct classes. When Amy, a frozen settler from earth, survives being thawed in a murder attempt, she immediately bonds with Elder, Godspeed’s lone teen and future leader. Amy’s individuality, her rebellion, and her fierce desire for freedom, inspire Elder to act on his own doubts and defy Eldest–his mentor and keeper–with shocking results. Eldest’s methods of twisting history and altering the lives of this captive community are a frightening echo of tyrants in our own history, and Across the Universe challenges readers to consider the impact of unchecked power, blind trust, and the ability of one dissenting voice to make a difference. 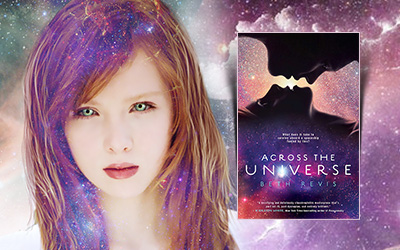 “A love out of time. A spaceship built of secrets and murder.”

It’s strange but what I liked the most was the description.. not the description of the ship itself, but the descriptions of the dreams Amy had, of her feelings, of Elder’s feelings for the strange girl with white skin and red hair. The description of this new society so strange and different, with those people that are more like aliens than humans. It’s a great book, written in a wonderful way, and I just love every page of it.

We have this girl Amy, who loves Earth, and life on Earth, and more than that she loves her parents (mostly her dad) and wants to go with them when they decide to enroll for this adventure of finding a new planet to live on. We find out some things about her life on Earth, about her deceptions, and we find out more about what she misses from home, about her dreams and fears, about the way she sees the world. She tries to give us the definition of “normal”.. but what normal really is?

Than we have Elder who doesn’t find his place in a tiny world made of iron (the only world he knows) and who dreams about a new world infinite and not perfect and not symmetrical, and not hand-made. He is the next to rule over the people on this ship, but finding about the secrets this ship is keeping is not an easy task to do, and knowing is sometimes not better that not knowing at all.

I don’t like when the main characters have such big responsibilities on their shoulders because they have to ‘split’ between love and duty and the development of those 2 sides of their personality is never enough to make that character stand out. Elder was a teenager and it was enough to see a girl he loved (a girl that was kind of forbidden) to forget about the fact that he was supposed to train to be a leader – his only purpose in life.

There story reminded me about ‘The Hunger Games’ just because Elder is the one that cares the most. At the end I can’t tell if Amy liked him or not that much because her feeling are not that easy to figure out. Elder on the other way made us understand from the first moment he sees her that he is amazed by her beauty and he would want to keep her forever by his side, to love her all his life. For him is like love at first sight (or what love at first sight might mean in a such strange world that Godspeed is). We see him protecting her and her dreams, struggling between his duties and his feelings, and the more we know him the less we expect him to surprise us in any way, but he does..

Another important character is Eldest. You may see him as the “bad guy” in this story (everyone thinks that he is the Evil in person), the one that keeps so many secrets, the one that makes so many horrible things… and he might be…. but I don’t really see him that way, I think that given the situation he made the best he could on those critical moments (and I don’t agree with him , is not that, I just understand why he did all those things). Maybe there would have been other ways to keep the ship running (some more ethical ways), but desperate moments need desperate measures and the most he could do was keeping his people alive. I don’t agree with the situation on the ship (God help us all to be in such an environment) but I can see how he didn’t know better, how they were on their own, with no one to help them or give them an advice, with no one to tell if they are right or wrong, a tiny world in such a huge universe, all on their own. He was wrong about so many things but he didn’t do all those things because he had a dark soul.. that’s the most I can tell about him.

…. And we will see in the next installment if he was right or not, if there are better ways to run this ship, to be a better leader over those desperate people, if the truth is better than the lies, if the hope is not the one that keeps us moving.. and now I think that I just said too much.

About the killer – well I knew who the killer was from almost the beginning. I was a bit annoyed to see how no one noticed anything wrong about the killers attitude and all, and I was a bit more surprised about the revelation itself, about all that we found at the end of the book. I was like “OMG!…. no way” about so many things and my only regret is that the ending was so, so, soooo rushed.

This was the best part of the book from my point of view, when all the pieces of the puzzle fitted together for the first time, and there were things that I knew about, but some that I didn’t see coming… And now I need to read this book again at least partially (to figure out why didn’t I see it all coming)… But everything was so damn rushed and I couldn’t keep up with all of it because even in one paragraph there was a lot to tell.. I don’t know, it just gave me the impression that the author really needed to finish the book but wanted to tell us the full story in those few pages and it’s a shame because in a way this is the part I liked the most.

And the last scene from the book is so strange, like the quiet before the storm, it scares me more than all those creepy scenes from the book. I’m not saying more, but I guess that in next book we will find out more.

Also, there are still questions that need to be answered – for example I want to know what did Eldest tell Harley near the end. This might be something unimportant for most of you, but that was why he made the decision he made and I would’ve liked to know him better, because he was one of my favorite character. And there are things that remained in the air (like some scene that leaves some marks on Amy’s skin.. I don’t want to spoil it for you and I won’t insist about it, but still the scene was not resolved at all.)

“I am as silent as death.

Do this: Go to your bedroom. Your nice, safe, warm bedroom that is not a glass coffin behind a morgue door. Lie down on your bed not made of ice. Stick your fingers in your ears. Do you hear that? The pulse of life from your heart, the slow in-and-out from your lungs? Even when you are silent, even when you block out all noise, your body is still a cacophony of life. Mine is not. It is the silence that drives me mad. The silence that drives the nightmares to me.

Because what if I am dead?”~ Amy

“I never thought about how important the sky was until I didn’t have one.” ~ Amy

“I want to take her into my arms and hold her tight. But at the same time, I know that is the exact opposite of what she wants. She wants to be free, and all I want is to hold her tight against me.” ~ Elder

“When I look at the fields, all I can see is how fake they are, how poor an imitation they are of the pictures of Sol-Earth fields. […]
And that’s why I’ll never be as good an Eldest as he is.
Because I like a little chaos.”~ Elder

1. There are some scenes that are not described in detail, but they are definitely more than what YA should be about. I didn’t enjoyed some of them (they weren’t even meant to be enjoyable), but I guess there were important for us to see how twisted that ‘world’ was.

2. I don’t know what’s the thing with the curse words in this book. If you feel like swearing just do it all the way.. if not, just keep it for yourself. Don’t try to hide the sun behind your finger. My first words in English were “yes” ,”no” ,”fuck”.. I think I can deal with reading that word just fine (thank you very much for your concern) and it’s more annoying to read a ” frexing ” derivative of it.

3. I just don’t know why people keep comparing this book with “The Host” because they are nothing alike (and I love them both).. except for the fact that the action takes place in the future, and the main interest in the story is the humanity, Earth, the beauty of life, love, etc.. Well, except for these 2 things, there is nothing that could possibly link these 2 books together.

2 responses to “Across the Universe”