Froi of the Exiles

Book 2 in the “Lumatere Chronicles” series
Three years after the curse on Lumatere was lifted, Froi has found his home… Or so he believes…
Fiercely loyal to the Queen and Finnikin, Froi has been trained roughly and lovingly by the Guard sworn to protect the royal family, and has learned to control his quick temper. But when he is sent on a secretive mission to the kingdom of Charyn, nothing could have prepared him for what he finds. Here he encounters a damaged people who are not who they seem, and must unravel both the dark bonds of kinship and the mysteries of a half-mad Princess.
And in this barren and mysterious place, he will discover that there is a song sleeping in his blood, and though Froi would rather not, the time has come to listen.
Gripping and intense, complex and richly imagined, Froi of the Exiles is a dazzling sequel to Finnikin of the Rock, from the internationally best-selling and multi-award-winning author of Looking for Alibrandi, Saving Francesca, On the Jellicoe Road and The Piper’s Son. 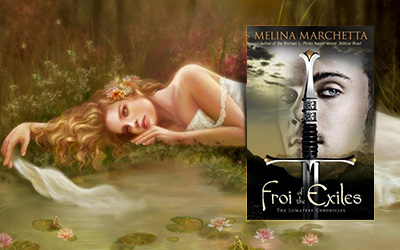 Dear Melina,
Keep breaking my heart, because you definitely know the best way to do it.

The first story I’ve been told was a fairytale.
I don’t remember which one was it, but that shouldn’t be a problem, as they all begin with “once upon a time”, get to the point where the handsome white-horse-riding prince must rescue the princes (falling in love with her beauty at first sigh), and then it ends with a “happily ever after”.
All fairytales are about joy, and beauty, and happiness, and the good that conquers it all.

Too bad this is not a fairytale.

“Is it because we are not beautiful?” she asked.
“What?”
“That you don’t want to save us. […] In the books of the Ancients the princesses are always beautiful and they always get saved.”

This story is about another curse, probably worse than the first one, it’s a story about suffering, and death, and trying too much and losing it all – it will break your heart into pieces, then it will put it back in place only to rip it up all over again.

This is a story about a cursed princess and a thief, about wars between kingdoms and assassins, about trust and betrayal, about secrets buried in time and forbidden feelings… This is the story of Froi of the Exiles.

Let me tell you this: if you loved the first book in the series, you will think that this one is completely insane – but you will love all it’s madness.

To be honest, I didn’t think there was needed a continuation of the story, but damn, now I feel that the story would not be complete without it.
Also I must confess that it really blew my mind.
There was so much happening, so many new characters to meet, to understand, to not trust, to love, to fear for their safety and to feel the need to cry for their tragic destiny… There was too much pain in this book, too much sadness, to many horrifying memories, too many human monsters, too many heartbreaking scenes, and now there is that need to find what happens next, there is that damned ending that left me hanging, counting the moments until I get the chance to read the next and final book.

He is an interesting character, changed from the first book. He is more mature and takes his responsibilities more seriously. His bond with the queen of Lumatere is as strong as before, but his mission is a really difficult one. First because he is all alone, second because he doesn’t know whom to trust, third because he finds new people and he gets attached to them, and this makes his life and his decisions even more difficult.
It is hard to love Froi, but it is as hard not to like him.
I wanted to punch Froi for holding too much inside his head and heart and for not putting into words all that he really felt, for hurting Quintana so deeply in the beginning, and even after falling for her, for not being able to fight more for her and their feelings, for being weak at times, and cruel as well, for knowing how to easily kill the enemy but so much more easily how to break a heart.
Still, I cared so much for him and his past, and his deep need to be loved. I wanted to hug him, to take care of him, to change his destiny, to sing for him such that he couldn’t listen to his blood song anymore – maybe, just maybe I could change something in his life, I could bring some joy into his face, I could unbreak a bit his heart.
I want him to be happy, I want him to have everything that has been taken away from him since his childhood – I want him next to Quintana, where he belongs.

“I’ll come and find you wherever you are. I’ll not stop breathing until I do.”

“Will Quintana of Charyn be beautiful in your play?”
..At least in my review she will:

Oh, dear Quintana, how much did she suffer for all those people that have never deserved it. All that sacrifice, all that pain, all that shame, all her frustrations and fears – how could someone live with so much pain inside, how could she not lose her mind in such a crazy world? But she didn’t.
I wanted to hug Quintana, to take her home with me, to keep her safe, to erase all her bad memories and show her how beautiful the world could be.
But in the same time I wanted to cheer for her because she had so much courage and she’d endured so much; because she took the pain of all those last born girls and kept it all inside her; because she suffered for all those people that were supposed to love her; because she has received only coldness and hatred from them all her life and she deserved to be happy.

“I heard your song the moment we were born.”

Gargarin and Arjuro
These two were such a pair. I loved them as strange as their actions were.
I cared for them, for all those horrors they’ve faced, for all the suffering, for a life full of regrets and no-going-back’s, for a childhood that no one should bear, and for so much more.

Lirah
We know by now that we shouldn’t judge someone at first sight. We know by now that Marchetta never creates a character that doesn’t have enough depth. We know by now that all the important characters in Lumatere series have been through Hell and back… this time, literally.
Her story was a horrifying as Quintana’s. There are no words to describe her suffering and her loss – for the treatment from her king and his guests, for her baby, for all those years in prison.

I liked how strong and confident Finnikin has become, and (still) how wise and caring Isaboe showed to be (as much as the situations allowed her).
I liked how they fought for the safety of their home and kingdom, but how they wanted nothing more but peace, how they cared about Froi, how they struggled to keep a happy family in all this madness.

Don’t ever ask me again if I hate living anywhere with you and Jasmina. This Rock reminds me of the boy I was and being with you in the palace reminds me of the man I want to be.’
‘Not just any man,’ she whispered. ‘A King. Mine.’

Beatrice and Trevanion
I didn’t think her story could be more heartbreaking, but it was. I thought her romance with Trevanion would have a quick resolution and a happy ending, but the was more to her story, more hearts to break, more tears tear to fall for her and her past.

“I still wake with your name on my lips every morning”

Lucian and Phaedra.
I didn’t pay much attention to them at the beginning, but I got to care so much for Phaedra. It broke my heart, it really did. She got from being some minor character to a quite important one, and I got attached to her suffering. She tried too much to be part of a community that resented her, part of a family that didn’t want her, and she had so much to give. I wanted so badly to see them both happy, as they deserved it so much.

“If your people mean no offense, they should not speak their thoughts out loud in front of their children, Tesadora. Because it will be their children who come to slaughter us one day, all because of the careless words passed down by their elders who meant no harm.

Rafuel
I am still wondering about this one. I think there is more to him that we could find in this book and I can’t wait to see his part in the next one. All you need to know for now is that he’s the reason Froi went to Charyn, some who he is the key to the past.

“Do you expect me to have regrets?” he asked. “When it’s you Lumaterans who speak an unwritten law that makes the most sense to me.”
“And what is that, Charynite?”Tesadora asked.
“What needs to be done”

The last-born boys
All I can say about them is that they were really cute and innocent. Protected as they were, they didn’t know much about fights and war, but they meant good – some times that helped, some times it didn’t.

“Grijo looked shamefaced. Oliver pretended to. Froi’s head was spinning too hard for anything to make sense.”

I am conflicted now, because I couldn’t believe those horrors, I couldn’t bear them.. There was too much pain, too many cries in the wind, to many broken hearts and lives destroyed in an instant. It was horrible and beautiful in the same time – I wanted to scream of frustration, I wanted to take care of those lost souls, I wanted to give them something to hold on to, because without a purpose I don’t know how could they survive all that carnage, all those horrors through all those years.

….Mirror, mirror on the wall, who is the best writer of them all?
Melina Marchetta, off course 🙂

ARC from the publisher via NetGalley – Thank you so very much!!!

4 responses to “Froi of the Exiles”