Between Shades of Gray

Lina is just like any other fifteen-year-old Lithuanian girl in 1941. She paints, she draws, she gets crushes on boys. Until one night when Soviet officers barge into her home, tearing her family from the comfortable life they’ve known.

Separated from her father, forced onto a crowded and dirty train car, Lina, her mother, and her young brother slowly make their way north, crossing the Arctic Circle, to a work camp in the coldest reaches of Siberia. Here they are forced, under Stalin’s orders, to dig for beets and fight for their lives under the cruelest of conditions.

Lina finds solace in her art, meticulously-and at great risk-documenting events by drawing, hoping these messages will make their way to her father’s prison camp to let him know they are still alive. It is a long and harrowing journey, spanning years and covering 6,500 miles, but it is through incredible strength, love, and hope that Lina ultimately survives. Between Shades of Gray is a novel that will steal your breath and capture your heart. 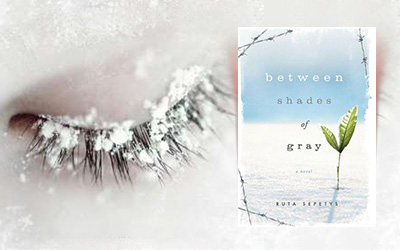 Step on my heart, cut it wide open, rub it with salt and feed it to the sharks.. Or just make me read this book, because this is how it feels like reading this story.

How can I call “wonderful” a book full of so many horrors?
…But I will, because it really is, and what pains me the most is that it’s all true, that this is a really tiny part of the darkest piece of our history as human beings.

You thought this was repugnant?!
Well, think again because this was only the beginning. What was left unspoken is what repugnance is really about.

I will confess that I was bracing myself for worse and even though for many of you some scenes were horrifying, I know that this was nothing compared with the horrors that have happened in that period of time.
We learn about it in school, we know about it from books, there are movies and documentaries that will break your heart, because (I repeat) nothing hurts more than knowing that these things happened, it’s not fiction – it’s history, one written in blood and suffering… and death.

This story touched me in a way I could barely explain. I felt so much disgust and anger that I could tear the book apart. It gave me so many goose bumps that I didn’t remember for a quite while how smooth skin felt like.
Yes, you were all right; this is a powerful story, full of emotion, that will make your soul bleed and your eyes tear.

It’s strange how can you find love and hope in such a hopeless place… The story was not as brutal as I thought it would be, but it broke my heart in many other ways:
It was their hope that broke me down, their smiles, their jokes, and Lina’s memories from long gone happy times (As a side note I should mention how much I loved the transition from present to past, how one scene melted into another, how the past faded right in front of my eyes).
It was the love that killed me softly, it was seeing that those broken hearts could still find inside them the force to care when there wasn’t almost any good left for them in the world.
And it was their force to keep going that made me love this book, because they were stronger when their body was weak, when their life was fading away, when they still held tightly to their dreams – even though they knew those were never to come true again.

The cover is absolutely perfect – It shows all the hope that filled their hearts, even when some of them were giving up their last breath. It reveals a piece of the settling, but also it shows that in all that coldness with which they were treated very few people showed them (just a bit of) mercy.

The characters are so complex and they bring so much into this story – from the bald man with his pessimistic thoughts, to the little children so full of life and hope (too young, too innocent to know the cruelty of this world).
It moved me how dramatically all those people changed through the story: kids had to grow up and help the others in order to survive, old people had to hold on to their memories to keep going, parents had to sacrifice everything for their children. They had to keep inside their fury, their hate and their shame. They had to keep their head down even though they were the ones deserving respect, because even when they had nothing at all, they still had hope and they fought for their life at all costs.

I need to mention Lina an Andrius, as their love was sparkling like a tiny star thought the darkest, clouded night sky. It gave hope and strength and made my heart ache just a little bit less.

“Andrius, I’m … scared”
He stopped and turned to me. “No. Don’t be scared. Don’t give them anything, Lina, not even your fear.”

Through the story, Lina saw the world and she described it in her sketches. Drawing was a way to express her fear, the injustice, the pain and the ache. That was her way of coping; gathering strength through her hope that some day her father will be able to reach them.

I’ll leave you now with some of my favorite quotes as I don’t have the force to describe this book any longer. This is not a story that you can talk about; you can only read it between tears and maybe find some colors between so many shades of gray.

“Are you really on page 300 or are you skipping ahead now?”

“Have you ever wondered what a human life is worth? That morning, my brother’s was worth a pocket watch.”

I loved the author notes as they gave so much depth to the story and now I feel the need to leave my owns notes here, because even though I can’t really conceive so much suffering, I can at least somehow understand it (though probably on a lower level that I might even think).

“How could Stalin simply take something that didn’t belong to him, something that a farmer and his family had worked their whole life for?”
“That’s communism, Lina”, Papa said.

Living in a country placed between Germany and Russia, our history has been marked (with dark ink) by those two as well. I know what communism means and I even know a bit how it ‘felt’. I was too young to understand what was happening but old enough to keep memories of my grandparents working the field each day, but only being allowed to keep some (very few) fruitage for themselves.

But if for me it is sad to think about those times when we were only allowed to buy rations of food (like half of a bread a day), I can’t even conceive how hard it might have been for those people that were ‘unlucky’ enough to be thrown in the middle of that madness described in this book, forced to work in such horrible conditions, humiliated and treated like animals, and even die horrible deaths while nobody cared.

As the author sais, there is nothing that we can do now to change the past, but we can learn from it, and we can prevent such horrors from ever happening again.

While reading the book I listened to the soundtrack, which is as amazing as the story itself and I recommend it with all my heart: Between Shades Of Gray (Original Soundtrack Based On The Novel By Ruta Sepetys), an album by Gavin Mikhail.

More about this book:

18 responses to “Between Shades of Gray”