She is pretty and talented – sweet sixteen and never been kissed.
He is seventeen; gorgeous and on the brink of a bright future. And now they have fallen in love. But… they are brother and sister.
Seventeen-year-old Lochan and sixteen-year-old Maya have always felt more like friends than siblings. Together they have stepped in for their alcoholic, wayward mother to take care of their three younger siblings. As defacto parents to the little ones, Lochan and Maya have had to grow up fast. And the stress of their lives—and the way they understand each other so completely—has also also brought them closer than two siblings would ordinarily be. So close, in fact, that they have fallen in love. Their clandestine romance quickly blooms into deep, desperate love. They know their relationship is wrong and cannot possibly continue. And yet, they cannot stop what feels so incredibly right. As the novel careens toward an explosive and shocking finale, only one thing is certain: a love this devastating has no happy ending. 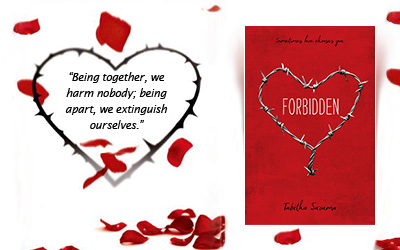 Warning!
This review might not make much sense to you – there were tons of thoughts clouding my mind and I just decided to put them down and free my head from them all. I was going up and down contradicting myself, but this is exactly what this book does to one, and that’s why it is so special. Also, note that there are some spoilers in this review, so you might want to read it only after you’ve read the book.

First half – the struggle..

On the first 50% of the story I felt like I’ve been cheated, as people kept sharing thoughts about the relationship between the two of them, but at the beginning this story was only about their struggle to keep the family safe and together… and more than that it seemed to be all about Lochan. (Even Maya’s chapters were about him, his problems, the way he helped her, the way he tried not to break down when everything seemed to be falling apart)

It’s a sad story about a boy that doesn’t find his place in this world, about a boy too shy to share his feelings and fears, a boy too young to have 4 little siblings to care for, a boy too sad to know the beauty of life, a boy too lost to find his path in this life.
Also, this is a sad story about loss, a story that will make you angry and sad and afraid and desperate to help.
I cared so much for Lochan, I wanted to strangle his brother Kit, I wanted to punch his mother, I wanted Maya to find a way to heal his pain, I wanted a bit of happiness for him, a way to feel at peace with the world and himself.

There was a moment that broke my heart – the teacher being so nice with him and so understanding made me cry. She was the only person from outside that wanted to help him. I wish there were many others like her, I wish they cared, I wish they didn’t turn away from him and left him so alone with such burden.
The world is too big and crowded for someone to feel so insignificant and alone.

The stress changed him more and more to the point of hurting one of his brothers, and even though I felt sorry for him and understood him, I didn’t like how Maya took his side and always told him it wasn’t his fault, because in fact it was! Yes there was a lot to deal with and his siblings made his life a living hell, but he needed help, someone needed to realize that he was losing his mind slowly, and (view spoiler) the way he acted in the end showed only that he really couldn’t take it anymore.

“This whole time, my whole life, that harsh, stony path was leading up to this one point. I followed it blindly, stumbling along the way, scraped and weary, without any idea of where it was leading, without ever realizing that with every step I was approaching the light at the end of a very long, dark tunnel. And now that I’ve reached it, now that I’m here, I want to catch it in my hand, hold onto it forever to look back on – the point at which my new life really began.”

The second part – the relationship..

I was never too judgmental about this subject.
I probably wouldn’t see it would the best eyes (somehow it would still be difficult for me to understand it, and I would be hypocrite not to realize this), but I wouldn’t point a finger, as life has taught me that some things are not as easy as they seem, that feelings go deeper than the ink and you never know a thing until you live it.

Anyways, even if I gave myself more time to really think about it and to search for my real feelings, I refuse to get into a polemic or talk too much about incest, because there are many things that could be said, and if we need to be fair in our assumptions there are many points of view from where to look at the whole situation, and it’s so damn easy to just give your opinion on subjects that are foreign to you.
So if you want to read and enjoy this book, you have pretend for a moment that you are one with the characters, that you have their life and their problems, that you think and feel like them and not judge them until you really understand them as they really are.
As long as your feelings get in the middle, you won’t get a chance to be objective and you have no chance at loving this story..

Talking about taboo subjects in books might be brave, but it takes a lot more to really achieve what this author had, to create a story that can and will be loved by so many people, no matter how controversial the theme of choice is.

Back to the story and to our characters, Lochan’s love for Maya was not as sick as some might think, as she was the only person in the world giving him love, she was the only person in the world that made him feel alive.. You might judge him (judge them) but after you read his story you get to understand that he deserved to be loved – just think about it: when the whole world is shutting you out, you care about the only person that cares for you, and in such a messed up world and family, there is no wonder that he got into a messed up relationship, as he was only human – and human beings need affection, in every form they can get it.

This being said, I tried to keep a really open mind and I tried my best to understand both main characters and not judge them.
Still, it felt a bit strange all that happened in the second half – and not (only) because they were brother and sister, but because I couldn’t get my head about their reasons for falling in love.
Yeah, I’m twisted like that; it’s like not judging someone for killing a person but for not having a good reason to do so. I know that love doesn’t need reasons, but I still need to be convinced in some way… and for this time I wasn’t.

I understood Lochan, as he was shy and had a lot of trouble with his social anxiety; even though it is hard for me, I still can see how he fell for his sister, how she was the only one always there for him, how he cared for her more and more with each day.
But I can’t say the same about Maya. I didn’t feel her emotions not even in the ending.
Lochan was emotionally unstable from the beginning, but she was more calculated. It was funny to read their conversation on the possibility of her abusing him and people not believing it, because that was exactly the way I saw it happening. The way she thought was so different than the way she acted, and it gave me this feeling that she was just playing with his troubled head. For her, this relationship was the exciting thing she couldn’t have, for him it happened to be.. everything.

“Out of the millions and millions of people that inhabit this planet, he is one of the tiny few I can never have.”

The ending made me angry. While other people cried all I wanted was to scream. It was so abrupt and full of bad decisions I couldn’t believe it. I get that they were two kids against the world, but his solution wouldn’t have helped anyways. And the fact that there were no consequences with the social service after what happened makes for a very unrealistic ending.

I think I would have loved this book without the romantic side but only because it failed to convince me that what they had was in fact love. I still think that Lochan was right and they were two messed up teenagers, not sure which one more than the other.

There were too many things thrown in the middle – Lochan’s trouble of speaking in front of other people (note that he could when he needed too), Maya’s fainting that showed only that she was such a drama queen, the family dynamic which was amazing in a sick way (the relation between each member was complex and gave away so many things about their personalities) the ending and the fact that nothing happened after that (with Maya, with the social service, with the family as a whole, so the sacrifice meant nothing to me). Some things were great but some others like the fights they had felt so unrealistic and added to this feeling of fake drama – let’s cry and yell a bit such that we can make up again.

I wish the author took the time to explain why relations between siblings shouldn’t happen, because the morality of it and “the law” are not really the (only) reasons. My limited knowledge about this matter comes down to genetics mostly, but I assume that the author took some time to study the subject more in detail, or she should have done that.

So I’m still not sure about this book or how I feel about it and 3.5 stars make a good average I guess. It is a heartbreaking story in so many ways and probably not a book for everyone, but one that will probably stay in my heart for a very long time (even forever).