Book 3 in “The Hunger Games” series.
Young Katniss Everdeen has survived the dreaded Hunger Games not once, but twice, but even now she can find no relief. In fact, the dangers seem to be escalating: President Snow has declared an all-out war on Katniss, her family, her friends, and all the oppressed people of District 12. The thrill-packed final installment of Suzanne Collins’ Hunger Games trilogy will keep young hearts pounding. 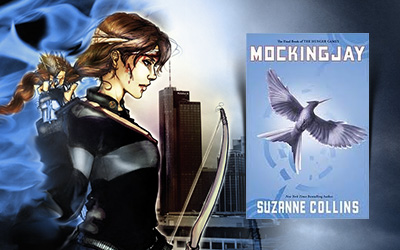 NOTE: This review contains some spoilers, if you haven’t read the book yet, you might not want to click on them.

Even though some people didn’t like Katniss’s breakdown, for me it was the right reaction.. She lost some friends, she almost lost her life, she lost the one she loved (but still didn’t know that she loved him o_O). She’s been through Hell.. twice.. and I think that everybody sane would have a moment of compleet desolation after all that. I felt her pain, and frustration, and anger and so her actions after that moment felt more real. There are some scenes I really liked, and there are some new or “almost-new” characters that got right to my heart (like Finnick)
There was plenty of action, and there were plenty of questions to be answerd, and I loved to see that the last book to kept me there completly lost in it, hoping and smiling and crying.. and even though by that point I knew Katniss so well I kind of knew what she was going to do, I still got surprised, and a lot.

“What I need is the dandelion in the spring. The bright yellow that means rebirth instead of destruction. The promise that life can go on, no matter how bad our losses. That it can be good again.”

I probably need to say something about Gale too, because he was an ‘important’ character but he appeared and disappeared so quickly that gave me the impression that he was there just to fill some space, just to give Katniss a reason to have some drama in her life when there was none.

But another character that I really liked was Haymitch, their coach. He is one of the many victors that suffered even after winning the Games. He lost everything and now he is drowning his sorrows in a bottle, but he is the one that keeps Katniss and Peeta alive, even though his actions are so strange that some times you just don’t know what his plan really is (or if he is a friend or an enemy).

I could make a list of the other characters I loved but I just want to mention Prim, the little sister, because she was the key to the story. I am sorry that she only found a voice of her own in the last book, but I was also glad that she was the one to give some great advices to Katniss when she didn’t have anyone else to run to, she was the one that made her sister see how much she cared for Peeta, she was the beginning and the end of the story.. And seeing her through her sister’s eyes made me feel deeply attached to her too.

Spoiler
The last part
I’ll try not to say too much about this but I just have to get it out of my mind.. The last part of the 3rd book was what I was talking (in the beginning of my review of The Hunger Games) about loving and hating in the same time.

Before you start to think that is something wrong about the ending and you don’t want to keep reading it, i must say that (even if it sounds a bit strange) also the things that I didn’t like happening in the book were great, because the story was still consistent. I didn’t like people dieing, I didn’t like how distant Peeta and Katniss got at some point of the story, I didn’t like to see what happened to the people from the districts, but all these were a tiny part of the world created in the book, and it was still amazing how it broke my heart some times and how it made me happy some others.

Now, back to my hurt feelings, I know this story was about war, and I know that war is by definition unfair, and I know that there were suppose to be important losses for the story to still be real until the end, but I couldn’t handle loosing some of those people.. I just couldn’t. That’s the power of a great book: it makes you care for the characters, it makes you want the best for them and it hurts when they are in pain.
I was never in my life so attached by some story characters as I was now, and I felt like the whole book has lost it’s purpose every time something went deadly wrong. At some point it felt like all Katniss did, all she suffered was in vain and it hurt to realize this. All those people dieing to change the world but the only real change was the victory agains the Hungar Games (and they were this close to loosing that victory too).. I can say only this: so much for so little .. yeah, I know in real life this is all true, a revolution doesn’t change the world entirely, because people do not change, but it was a fantasy for crying out lout, it was suppose to have the ending it deserved not a realistic one!!!

…And if that wasn’t enough, there was a particular moment in the story (including a particular cat) that broke my heart completely… Yeah, I cried and this makes this book even better because it touched my heart so deeply I can’t put it into words.

After that I just hoped in the last moment to have a bit of Peeta’s sweetness to make me feel better, but the resolution to their romance was so rushed too.. Now I was disappointed by their love story – not in the middle of the story after he almost died for Katniss so many times and Katniss still did’t realize how much she loved him (because then there were plenty of pages to get through), but in the brief half page dedicated to their love.

Again.. Don’t get me wrong, the disappointment was not for the book itself, because even though I am a fan of complete happy endings, and even though I wish for some things to be different in this particular case, I can tell when an ending is fitting the story.. And this ending was bitter-sweet, there was enough drama in it to make it memorable and a sweet touch of happiness to make your heart melt a bit..

I think that “The Hunger Games” is the series I love the most and some time in the future I’m going to read it again, this time not in 2 days but taking time and enjoying (again) every single page of it, because this is a ‘great, great, great’ story :))