Abandoned by her mother on Jellicoe Road when she was eleven, Taylor Markham 17, finally confronts her past. Hannah, the closest adult she has to family, disappears. Jonah Griggs, moody stares and all, is back in town. If Taylor can put together the pieces of her past, she might just be able to change her future.
—
My father took one hundred and thirty two minutes to die.
‘I counted.
‘It happened on the Jellicoe Road. The prettiest road I’d ever seen, where trees made breezy canopies like a tunnel to Shangri-La. We were going to the ocean, hundreds of kilometres away, because I wanted to see the ocean and my father said that it was about time the four of us made that journey. I remember asking, “What’s the difference between a trip and a journey?” and my father said, “Narnie, my love, when we get there, you’ll understand,” and that was the last thing he ever said.
—
‘We heard her almost straight away. In the other car, wedged into ours so deep that you couldn’t tell where one began and the other ended. She told us her name was Tate and then she squeezed through the glass and the steel and climbed over her own dead – just to be with Webb and me; to give us her hand so we could clutch it with all our might. And then a kid called Fitz came riding by on a stolen bike and saved our lives.
‘Someone asked us later, “Didn’t you wonder why no one came across you sooner?”
‘Did I wonder?
‘When you see your parents zipped up in black body bags on the Jellicoe Road like they’re some kind of garbage, don’t you know?
‘Wonder dies.’ 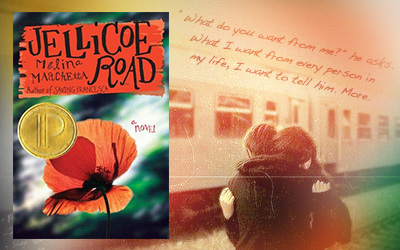 Oh, this is a hard book to review and I know that I won’t make it justice so I won’t even try that much.

One word: awesome! Why?
Because it is so complex and beautiful, and the characters are amazing and smart and funny, and the drama is not overwhelming (oh, well… it is, but in a good way), and the story makes you laugh and shudder (and some say that they even cried – later edit: the first time I didn’t, I guess I was in too much of a shock for that to happen), and you say ‘wow’ a lot of times, and when you think that you have it all figured out something changes drastically, and your head is spinning around from so much information but you just enjoy it more and keep reading until the end and then you say ‘wow’ again.

I was told that the beginning was hard and they were right about it. For many, many pages I didn’t know about the 3 perspective thing (dream/present/past) and there were so many characters and I felt so lost, but the writing was so good and kept me reading so I don’t regret even that part. Then I understood and there were things that I even knew before the character found about them, but there were plenty of other surprises too so it didn’t feel that predicable at all.

Some say that this book changed their world, I won’t lie, it didn’t – but it won my heart, slowly it became part of my being. I can’t imagine a world without this book – it was a really great book and it deserves a lot more than 5 stars.

There is drama on so many levels:


“My father took one hundred and thirty-two minutes to die. I counted.”

But there is also love:


“If you weren’t driving, I’d kiss you senseless,” I tell him. He swerves to the side of the road and stops the car abruptly. “Not driving anymore.”

There are some funny moments:


“Great to know that I’m in love with a girl with a cool name.” “It’s Taylor’s middle name”

And there are some thoughtful ones:
“And life goes on, which seems kind of strange and cruel when you’re watching someone die.”[/cite]


“Do you think I don’t want him to be gone more than you do? I do. Because I need to know that I can still breathe properly when he’s not around. If something happens to him, I have to know that I won’t fall apart […]”

And sometimes it all feels as casual as your own story:

And at the end it makes you think about it all over again:


“Is a person worth more because they have someone to grieve for them?”

Note: A Romanian version of the review can be found here.

UPDATE: I’ve decided to write a full review for this book and I featured it separately: Review: On The Jellicoe Road [re-read] as there was too much to say, too much love to spread.

. It feels like delivering heart on a silver platter, all I hope is that you could feel the same while reading the book, because this story is simply that awesome!

On The Jellicoe Road [re-read]

Reading (at least one of) Marchetta’s stories should be one of the “10 things to do in your lifetime”.
Seriously, this woman is one of the most creative people alive, one of the most amazing writers I came across and I wish I could put into words the actual awesomeness of this book, but I feel a bit at a loss for words – well, once again. 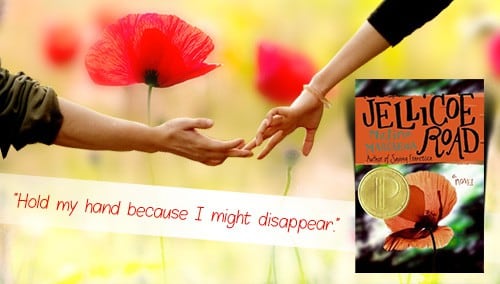