Book 2 in Delirium Series:
Lauren Oliver captivated readers with DELIRIUM, the first book in a thrilling dystopian trilogy in which Lena Haloway dared to fall in love with Alex and escape the cure, the government-mandated procedure that renders a person immune to the disease of love. Lena and Alex staked their lives on leaving their oppressive society, but only Lena broke free.
PANDEMONIUM continues Lena’s gripping story. After escaping from Portland, Maine, Lena makes it to the Wilds and becomes part of an Invalid community, where she transforms herself into a warrior for the resistance. A future without Alex is unimaginable, but Lena pushes forward and fights, both for him and for a world in which love is no longer considered a disease. Swept up in a volatile mix of revolutionaries and counterinsurgents, Lena struggles to survive—and wonders if she may be falling in love again.
Full of danger, forbidden romance, and exquisite writing, Lauren Oliver’s sequel to Delirium races forward at a breathtaking pace and is sure to appeal to fans who crave the high-stakes action of THE HUNGER GAMES and the bittersweet love story of ROMEO AND JULIET.
—
“I’m pushing aside the memory of my nightmare,
pushing aside thoughts of Alex,
pushing aside thoughts of Hana and my old school,
push,
push,
push,
like Raven taught me to do.
The old life is dead.
But the old Lena is dead too.
I buried her.
I left her beyond a fence,
behind a wall of smoke and flame.”

Lauren Oliver delivers an electrifying follow-up to her acclaimed New York Times bestseller, Delirium. This riveting, brilliant novel crackles with the fire of fierce defiance, forbidden romance, and the sparks of a revolution about to ignite. 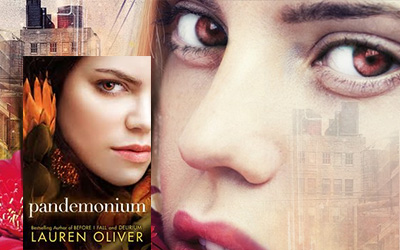 What a wonderful surprise!
You know, there is nothing better in this world than being wrong when something good is about to happen.

This book called me – It’s not that I loved the cover (which is beautiful, but I still don’t think that it fits the story), it’s not that the description was mind-blowing (in fact it’s a bit misleading, talking about Lena fighting and being a warrior, which is not really the case here – I wonder if the person that wrote the synopsis knew what this story was about)…
I just took a look at it one day and it looked at me right back and it told me: pick me up!
And I did.. I don’t know why, because I was so sure that I wouldn’t like it.

If you are smart, you care. And if you care, you love

I’ll start with what didn’t make me love this book:

Well, at the beginning I didn’t like Lena.
You know how I didn’t buy her love for Alex? Well, she failed this time to make me believe that she even cared about his death. She cried like once (maybe twice), and she thought about him from time to time (when she needed it to make her stronger), and there were some wonderful words here and there about broken hearts and suffering, but that was kind of it. It’s true, she had other things to think about, but hello! a little bit of heartbreak wouldn’t have kill her.
I have no idea (!) why did some people cry reading this book – I was only sorry for Alex because of my own ‘feelings’ for him (in a ‘I cared about this poor guy in the first book’ kind of way and I knew he deserved better).
I mean, I was like – you idiot, this guy probably went thorough hell because of you, he might be dead! You should cry your heart out, you should feel like dying too, you should make me want to rip my heart out – wanting for him to be alive, to see him one more time (*rolling eyes* I know, I know, I am being overly dramatic right now, but you get the point. I wanted to feel her pain and it didn’t deliver)
Also there is this tiny thing – at the beginning, even in the ‘NOW’ chapters, I thought she was weak. She was supposed to be this new Lena, stronger and smarter and wanting revenge, but she was still a bit insecure… But that was just in the beginning.

Now, the things that I liked about this book:

The second half of the story had a totally different feeling.
Lena started to grow some (back)bones, she started to make me believe that she has changed, that she was a fighter after all, that she had feelings but also some brains.
She met Julian and even though they were practically enemies, they had to work together; they had to survive and help each other in order to stay alive.
And this is the beginning of a great adventure.

I loved the action in this book. I suffered enormously in the first book because I felt there was no action, but here there was plenty and I loved every scene. As I think I’ve told you, the first half was a bit slow, but after that I almost couldn’t keep up with all that happened (both in the past and the present). I couldn’t get over a shocking scene in one dimension because I got another strike in the other one).

“That’s the thing about the cure, isn’t it? It isn’t just about deliria at all. It’s about order. A path for everyone. You just have to follow it and everything will be ok.”

There was fighting, there was running, there was planning how to survive. . And also there was some drama. Not only related to her loss (Alex and her past life), but there are other characters that we meet, some with a tragic destiny, and you can feel the pain they go through, you want them safe, you grieve for their death.. you really get to care.

And there was Julian.
He is the reason I loved this story, because he made Lena a better person.
He is the enemy, he is the symbol of this twisted system, he is a puppet on the outside, but in the inside.. that’s a whole different story.

NOTE: I’ll keep the next part as a spoiler not wanting to ruin somehow your reading experience.
So please stay away from it for now.

(view spoiler) I liked the way Lena and Julian managed to get close, to share things about their lives, to risk everything one for the other. I liked how they were perfect strangers at the beginning, how they started to talk (and they were shy and cute), how they became friends, how they started to have feeling for each other.. how they fell in love.
All that love I didn’t see between Lena and Alex, I could feel it here.
I loved Alex in the first book – I never though that he should be with Lena, but I liked him.
Now I am sad, for him, for them both, because I know that Julian is better for Lena, there is a better chemistry between them, there is a better communication, they are perfect together.
I know that probably Alex and Lena will end up together, but I wish they didn’t. I think they shouldn’t.
This is why I hate love-triangles, because it’s so hard to choose.
There’s Alex from the first book – that risked his life for Lena, and he loved her with all his heart, but I don’t get why did he love her because they had nothing in common. Was it because they were different? Was it because they shouldn’t have, because love was forbidden?
And there is Julian – I could feel their love, I could understand why they loved each other, she had now other options, there were other boys out there, but she fell for him. And Julian, he didn’t have options but they spent days together, they fought for their lives together, there was no love at first sight, but a realistic one.
You know, Lena thought Alex died for her and she needed a year or so (I didn’t really get how much time passed between THEN and NOW) to get stronger, and Julian only received a few punches in the face and she then became this kick-ass girl that could do anything in order to survive and save the ones she cared about.
Don’t get me wrong, I loved Alex (I can offer to keep him for myself if Lena decides that she is not interested any longer), but I am all for Julian in this story.


And now the best.. there’s the ending.
No, I am not discussing it, but I loved it.
There are 4 words (should I say 3 and a half? LOL) that still make my heart ache, because there is so much truth in them.
Oh my, oh my, oh my.. what a cliffhanger!

CONCLUSION:
Was I surprised to love this story?
Hell yeah! I am so glad that I did enjoy it and I don’t know how will I be able to wait until the next book comes out. I want to read it NOW!

I hope you will enjoy this story too, and if not, don’t worry – I’ve been there already, it doesn’t hurt that much, you’ll survive 😛