The Geography of You and Me

Lucy and Owen meet somewhere between the tenth and eleventh floors of a New York City apartment building, on an elevator rendered useless by a citywide blackout. After they’re rescued, they spend a single night together, wandering the darkened streets and marveling at the rare appearance of stars above Manhattan.

But once the power is restored, so is reality. Lucy soon moves to Edinburgh with her parents, while Owen heads out west with his father.

Lucy and Owen’s relationship plays out across the globe as they stay in touch through postcards, occasional e-mails, and — finally — a reunion in the city where they first met.

A carefully charted map of a long-distance relationship, Jennifer E. Smith’s new novel shows that the center of the world isn’t necessarily a place. It can be a person, too. 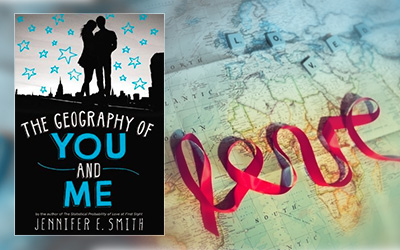 You might have noticed by now that I love emotional stories. You know, those books that make me smile until my face hurts, but that can also make my soul ache just a little bit.

This is in fact what I like about reading, in general – because it takes me through so many emotions in only a few hours: it’s addictive, it’s beautiful, and it’s all I ever want… And so is this book.

I fell in love with Jennifer’s writing in “The Statistical Probability of Love at First Sight” and I might love this one even better. This book is sweet, it is fun and it also has a deep side of it that can easily touch one’s heart.

The Geography of You and Me is mostly descriptive – it shows snippets of moments suspended in time, it describes deep emotions, and still the author managed to ‘show‘ not simply to ‘tell‘ and I was soon very much in love with the beauty of this story.

“How long could a single night really be expected to last? How far could you stretch such a small collection of minutes? He was just a boy on a roof. She was just a girl in an elevator.”

There was so much I loved about this book:

Starting with their first meeting in the elevator, or their second time in San Francisco, even with its fiasco ending. Then, there are all those insights inside their lives, their personal struggles with their families or the friends they make while moving around. Their feelings about the places they visited/lived in were so different and so beautifully portrayed. They didn’t have it easy, both had problems form the past that needed to be overcome, for them to be happy again.

The postcards were meaningful and cute, they made me want to pick one too and send it to someone I care about. I wish we would still do that, because happiness can take the form of such small gestures.

But the most beautiful thing (for me) is the way they gravitated towards each other, no matter what. There was distance between them, both emotional and physical, but they still thought of each other and they still held a tiny hope that one day they would see each other again.

“If you were to draw a map of the two of them, of where they started out and where they would both end up, the lines would be shooting away from each other like magnets spun around on their poles. And it occurred to Owen that there was something deeply flawed about this, that there should be circles or angels or turns, anything that might make it possible for the two lines to meet again. Instead, they were both headed in the exact opposite directions. The map was as good as a door swinging shut. And the geography of the thing- the geography of them- was completely and hopelessly wrong.”

I also liked Lucy and Owen as characters – he was so caring, thoughtful and hurt. He missed so many things in his life. She was so shy and alone, needed someone to fill the void in her life. They were 2 broken pieces that fit together.

I could relate easier with Owen, then again his side of the story was a bit deeper too. There’s nothing I love more than wanting a character to just pop out of the book in order to hug him – Owen needed plenty of hugs and I was willing to give them all.

The story is simple. It’s not the actual romance that got me this badly, but the way they felt about it, about everything. It touched me. It was so emotional it made my heart flutter… It was a subtle kind of beauty; still this story was so beautiful it hurt.

This seems like a very short review compared to what I usually write these days, but this story is just as beautiful as the ones before it. I am just a bit at a loss for words to express it properly. So I will leave you with some favourite quotes to tell you what I can’t make myself say.


“But there’s no such thing as a completely fresh start. Everything new arrives on the heels of something old, and every beginning comes at the cost of an ending.”

“Sometimes it seemed as if his whole life was an exercise in waiting; not waiting to leave, exactly, but simply waiting to go. He felt like one of those fish that had the capacity to grow in unimaginable ways if only the tank were big enough. But his tank had always been small, and as much as he loved his home- as much as he loved his family- he’d always felt himself bumping up against the edges of his own life.”

“They were like a couple of asteroids that had collided, she and Owen, briefly sparking before ricocheting off again, a little chipped, maybe even a little scarred, but with miles and miles still to go.”

“When there was nothing but space between you, everything felt like a leap.”

“They just stood there, regarding each other silently, the room suddenly as quiet as the elevator had been, as comfortable as the kitchen floor, as remote as the roof. Because that’s what happened when you were with someone like that: the world shrank to just the right size. It molded itself to fit only the two of you, and nothing more.”

“The quiet between them had gone on for far too long now to pretend it was anything other than what it was. There were no more words; all that was left were two faintly beating hearts.”

Book Source: ARC provided by the publisher for review. Thank you very-very much!