Clara’s relationship with Christian is intense from the start, and like nothing she’s ever experienced before. But what starts as devotion quickly becomes obsession, and it’s almost too late before Clara realizes how far gone Christian is—and what he’s willing to do to make her stay.
Now Clara has left the city—and Christian—behind. No one back home has any idea where she is, but she still struggles to shake off her fear. She knows Christian won’t let her go that easily, and that no matter how far she runs, it may not be far enough. 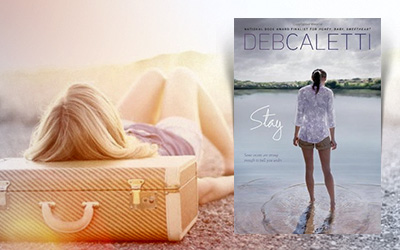 “I tried to read that book again before I went to sleep. I didn’t like that book, but I kept going for all the reasons a person hangs in with something that isn’t good – you feel bad about not giving it a chance, you’ve already come too far to give up now, you believe it´s going to get better. When you’re a person whose life has mostly brought good things, you believe in goodness. You believe that things will work out. Even the worst things will work out. You believe in a happy ending.

But you are naive. The mostly good in your life has made you that way. You’ve spent so much time seeing the bright side that you don’t even believe the other side exists. You are wrong about that.

I closed that book. I wouldn’t open it again, I vowed. It was time to learn something.”

I was just about to do the same..
I’m glad I didn’t – such beautiful writing, such touching words.

The story was a bit slow and it took a while for me to really get into it, but I loved it for all the messages hidden between the lines.

I think that this book might teach young girls to protect themselves from the overprotective boyfriends, to avoid them, and not to get into similar situation. Or so I hope.Because Clara’s story gives some good insights into the life of someone with a possessive, aggressive, at the border of obsessive boyfriend.. I mean, I wouldn’t really know it, but it felt authentic enough to me. The way Clara behaves with other people, the way she avoids talking about other boys, or even look at them. The way the relationship evolved painfully until it turned into a mess. The way some might be blinded by their situation and their mistakes and can’t see ways out of terrible situations. The way they might need help.

And I love how we uncovered her story slowly, how full of emotion it was, because it also tackled other powerful topics. And really, once you take the book in your hands you will find it hard to put it down until the end.

I liked Clara. Maybe she didn’t see all those signs, maybe she hoped for things to get better, to be how they used to be. Maybe she didn’t know when to put a stop to the situation she was in. But she grew through the story. She was aware of them in the end. She’s been through so much and all I wanted was for her to finally find some peace in her life. (And no, I am not actually talking about Finn, because as cute as all was, I think it was a ‘bit too soon’. Then again, what do I know about that either?)

All in one a great story, one that deserves more attention, one that I deeply enjoyed.