It’s hard not to notice Terra Cooper.
She’s tall, blond, and has an enviable body. But with one turn of her cheek, all people notice is her unmistakably “flawed” face. Terra secretly plans to leave her stifling small town in the Northwest and escape to an East Coast college, but gets pushed off-course by her controlling father. When an unexpected collision puts Terra directly in Jacob’s path, the handsome but quirky Goth boy immediately challenges her assumptions about herself and her life, and she is forced in yet another direction. With her carefully laid plans disrupted, will Terra be able to find her true path?
Written in lively, artful prose, award-winning author Justina Chen Headley has woven together a powerful novel about a fractured family, falling in love, travel, and the meaning of true beauty. 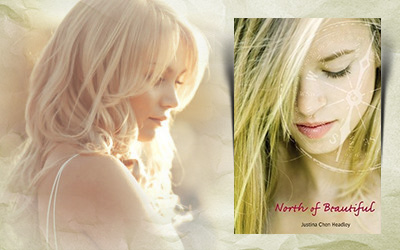 “Beauty–real everlasting beauty–lives not on our faces, but in our attitude and our actions. It lives in what we do for ourselves and for others.”

As in the previous book, i liked the way the author described the ‘abuser’ and the family relationships (and ‘liked’ is such a relative word, because I wanted so badly to punch Terra’s father all through the book, and her brothers too, but also it felt so realistic that it hurt).

The relationship between Terra and Jacob was other thing that I liked.
He was the right kind of guy for a girl like her (full of insecurities, of fears). He saw the beauty in her and he showed it to her.
He made her realize that life is more than good looks and makeup, and also being with him showed her what a healthy relationship could be like – so different from her parents, even so different from her relationship with Erik, a guy she didn’t love, but she just felt she wouldn’t be able to find someone better, because she felt so little of her (and I am not saying that Erik was a bad guy because he wasn’t, and in the end I liked him a lot, but he was not the right guy for her).

The ending took me by surprise. I wanted at least one more chapter to see how things were settling down, and I had so many questions unanswered about her father and her mother, and her brother(s), and college, and also Terra and Jacob, but with or without my perfect ending, this book is still amazing.. I loved it!