Vera’s spent her whole life secretly in love with her best friend, Charlie Kahn. And over the years she’s kept a lot of his secrets. Even after he betrayed her. Even after he ruined everything.
So when Charlie dies in dark circumstances, Vera knows a lot more than anyone—the kids at school, his family, even the police. But will she emerge to clear his name? Does she even want to?
Edgy and gripping, Please Ignore Vera Dietz is an unforgettable novel: smart, funny, dramatic, and always surprising. 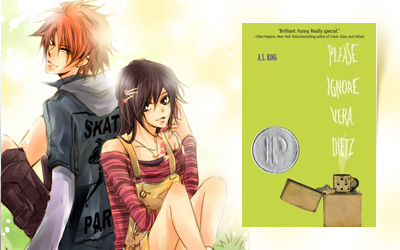 Once upon a time there was a boy and a girl.
They’ve been friends since forever, they cared for each other, they played and went to school together, they were inseparable.
They fell in love.
…Until they grew up.
Until things got complicated.
Until there was no longer a boy and a girl.
But only a girl, only Vera..
…Please ignore Vera Dietz.

All her life Vera’s been thought to ‘ignore’.. To ignore the kids that were mean, her mother than never cared, her father that was unhappy, the screams from the next door, the bruise on the boy’s skin.
And all she wanted was to be ignored as well..
Until she wasn’t anymore.

I’m sorry, but I don’t get it. If we’re supposed to ignore everything that’s wrong with our lives, then I can’t see how we’ll make things right

“Please Ignore Vera Dietz” is a story that deals with some complex subjects. Also it gives us some good lessons about being human, about making mistakes, about trying to change what’s wrong, about what-if ‘s, about being too late, about deciding to do something while you still can…  Because  we can learn from their errors, we could be so much better, we could do so much more.

I still wonder if the ending would have been different if Vera did something. Anything.. Would it have made any difference at all?

And this question consumes her as well.
Until there’s no mystery, until there are no more secrets, until there is nothing left to do.

Two gulps of vodka later, my eyes are watering and my throat automatically grumbles “Ahhhhh” to get rid of the burning. Don’t judge me. I’m not getting drunk. I’m coping

There are many things I liked about this story. I took the book in my hand and couldn’t put it down. I wanted to know more, to understand the characters better, to see what made them do the mistakes they did, to understand why there was no return point for them..

I wanted more Charlie into the story, I wanted to understand Vera’s mother, to know more about Vera’s father, to punch Charlie’s parents and his new ‘friends’. I liked some of the relationships between the characters, but others seemed off. Still, they were all so human with all their mistakes and hopes, they all needed more.
It was sad to see Vera and Charlie get more and more distant. I wanted to shake them both and make them see the obvious.

What I didn’t like was the revelation.. Sorry, I Just wasn’t emotionally invested, not enough. The story seemed too light for what had been promised. The ending should have felt tragic, dramatic.. but for me it was not. I enjoyed the ride, but the destination left me with a bitter-sweet taste in my mouth.. more bitter than sweet.

As for Jenna, she is still a mystery to me. I didn’t get the answers I needed.
And I couldn’t really understand Charlie. He tried too much to be a better person and then he just gave up.
I wish.. I wish they wouldn’t have ignored Charlie Kahn.. and so does Vera.