in Dreaming after Midnight

Ian O’Shea (from The Host by Stephenie Meyer)

“It’s not the face, but the expressions on it.
It’s not the voice, but what you say.
It’s not how you look in that body, but the thing you do with it.
You are beautiful.”

What do we know about Ian O’Shea?

He is most probably “black-haired with oddly fair skin and vivid blue eyes”, like his brother.


“I noticed that his nose was perfect–straight, aquiline, the kind of nose that I’d seen in pictures of famous sculptures. Did that mean that others found him more bearable than the brother whose nose was often broken? Or that he was better at ducking?”

#1: He is more kind than most humans:


“How strange that Ian, of all the humans, should have such a surprisingly gentle interior”.
“Ian is… Ian believes me. He watches over me. He can be so very kind… for a human.”

#2: He learns to treat everyone the way they deserve it (humans or aliens):


“Her name is Wanda, not it. You will not touch her. Any mark you leave on her, I will double on your worthless hide.”

#3: He loves with all his heart and he is not ashamed to admit his feelings:


“Fine,'”Jared snapped. “But if you try cuddling up to me tonight… so help me, O’Shea.”
Ian chuckled.” Not to sound overly arrogant, but to be perfectly honest, Jared, were I so inclined, I think I could do better.”

#6 And if you’re not convinced yet, you can ask Wanda to see what she has to say about him:


Ian’s fingers brushed across my cheek. It felt nice, and I leaned into his hand when he left it there. I wondered if it was the No Pain or just the joy of saving Jamie that made everything warm and glowing.

Oh my, I really don’t remember not liking Ian. But he was a bit too possessive at times, so we can put that on his wall of shame (good for Wanda that she had a great personality and could handle him just fine)


Next time she raids, I’m coming, too.”
“She’s not going out again,” Ian answered, his body tensing. I brushed my hand against his face, trying to soothe him.
“Of course not,” I murmured to him. “I don’t have to go anywhere unless I’m needed. I don’t mind staying in here.”

So, why Ian Somerhalder? 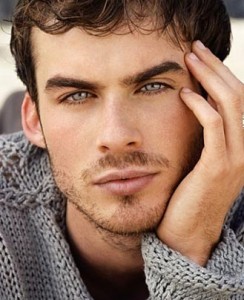 Well, after reading the book he just popped into my mind. I am not a fan of his, I’ve never watched his movies, but I think he looks great for the part.