One choice can transform you—or it can destroy you. But every choice has consequences, and as unrest surges in the factions all around her, Tris Prior must continue trying to save those she loves—and herself—while grappling with haunting questions of grief and forgiveness, identity and loyalty, politics and love.
Tris’s initiation day should have been marked by celebration and victory with her chosen faction; instead, the day ended with unspeakable horrors. War now looms as conflict between the factions and their ideologies grows. And in times of war, sides must be chosen, secrets will emerge, and choices will become even more irrevocable—and even more powerful. Transformed by her own decisions but also by haunting grief and guilt, radical new discoveries, and shifting relationships, Tris must fully embrace her Divergence, even if she does not know what she may lose by doing so.
New York Times bestselling author Veronica Roth’s much-anticipated second book of the dystopian Divergent series is another intoxicating thrill ride of a story, rich with hallmark twists, heartbreaks, romance, and powerful insights about human nature. 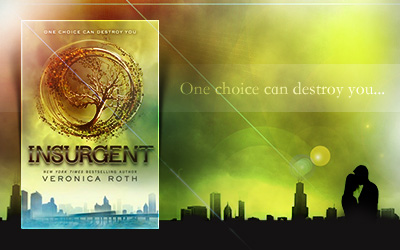 I am not really sure of my feelings for this book.
– On the good side there was plenty of action and the concept at the ending of the book seems to be quite interesting. (view spoiler) I was sure that at some point we needed to know what was outside the fence, and I can’t wait to see what happens next with our characters. – On the bad side, parts of the action didn’t make much sense. So much hiding in plain view, so much running away with no place to go, so many suicidal missions, so many broken promises, so many lies, so much mystery without a solid base… I guess you see where I’m headed… I thought it was a bit overdone.
But let’s take it step by step.

“Insurgent, he says. Noun. A person who acts in opposition to the established authority, who is not necessarily regarded as a belligerent.”

First the COVER – it is beautiful. I don’t care that it doesn’t have much to do with the story, as it has been design in the middle of the writing process, all I care is how lovely it is (as well as the cover for Divergent). I love it!

The ACTION:
I loved the fact that we had a smooth transition between these 2 books, without a period of time when you need to fill in the blanks. It starts from the very moment Divergent ended, as we waited to see what was supposed to happen with the characters when they reached their destination.

On the bad side, parts of the action didn’t make much sense. Tris was going through a rough time and she was getting into suicidal situations more than not. Also there were so many lies and secrets that I got tired to keep up with them. The suspense was there to keep you going, but after a few suicidal missions I couldn’t care less about their shaken self esteem (and the fact that I knew I had still half of the book ahead made me worry even less).

CHARACTERS
Veronica’s characters are full of life and driven by passion and a strong sentiment of justice and truth. They are high on their highest and low on their lowest and they manage to bring all the emotions they feel to you.
It feels like an amusement park, because as much as it scares you, you still want another ride. The only problem is that too much dizziness can be a bit too much, and characters switching sides and lying all the time can get on my nerves at times.

Tris:
I can’t really put my head around some things. Like how weak Tris has become, and no, it is not that what she did in this book was because she was brave or strong, it was just because she was being reckless, and didn’t care about anyone else but herself.. Yes, she was selfish, and I can’t even say that this is a bad thing because, you see, that’s how she thought of herself from the very beginning, that was how she became dauntless. I cared for the loss of her parents, but all the lies she had to tell Tobias were out of place. She didn’t need to do that other than adding some unnecessary tension between the two of them and to become a silly damsel in distress that he needed to save all over again. *sigh*

“You die, I die too.” Tobias looks over his shoulder at me. “I asked you not to do this. You made your decision. These are the repercussions.”

Tobias:
Tobias – was quite left out of this story. He only got to make some convenient appearances here and there, and his actions were so contradictory that I don’t know what to think of him anymore. He seemed to have some secrets but were they revealed? I don’t think so. There was nothing special about the things he didn’t say to Tris, unless there is more to figure out in the next book.

I liked them so much in the first book and in this one they made no sense as a couple, acting so strange, fighting only to make up again. It was crazy. I get that they had other things on their mind and the romance was not so important into the story, but their actions showed so little respect for each other and so many gaps in their relationship that it was really sad to ‘watch’.

Other characters:
There were so many characters that appeared and disappeared that I didn’t get to care much for them. Yes, we knew most of them from the first book, but it was not like in the first book we got along on the caring side either. There were also many surprises regarding the loyalty of some of them; I should probably read these 2 books again and see if their personality/actions match all these changes or if they were random to simply make the story work.
(view spoiler) BTW, Peter (hope I got his name right) was such a strange character. His theory about taking sides is quite messed up and damn convenient… really!

“People, I have discovered, are layers and layers of secrets. You believe you know them, that you understand them, but their motives are always hidden from you, buried in their own hearts. You will never know them, but sometimes you decide to trust them.”

ROMANCE:
If I liked the romance in the first book, I pretty much got sick of it in this book. How many times can they lie to each other, hide things and betray one another, without kissing and making up afterwards in a matter of minutes? Yes, they had their moments (some of them were really cute, others a bit funny), but after a while I started to wonder why did they care for each other, why didn’t that love disappear between thousand of lies and mistrust?

“We’re all right, you know,’ he says quietly. ‘You and me. Okay?’ My chest aches, and I nod. ‘Nothing else is all right.’ His whisper tickles my cheek. ‘But we are.”

All in one, this was an entertaining read, and the possibilities from here are endless. I can’t wait to see what new adventures await our beloved characters and how things will end in the next and last book in this series.

Hopefully you will love this better, so if you liked the first one you should definitely give this one a try too.

Wow, just how COOL is the teaser trailer! I’m amazed and completely sold!! I want this now!!!

After you view the first animation, select other characters from the bottom menu.