I lied my way into a band, humiliated them on stage, and got my heart broken by the bassist. Now…we’re on tour together.

Of course my dad, who I haven’t seen since he kicked me out, makes a surprise visit the day before we leave. Spoiler alert: It doesn’t go well. I have to quit the band and go to college or he’s cutting me out of his life for good.

This tour is the best opportunity we may ever have – and it’s already a disaster. We’re broke. We can’t stop fighting. And being in such close quarters to Sean isn’t exactly helping me get over him. Even though we’re just friends now, every time our fingers brush or our eyes catch, my heart betrays me. He’s the kind of distraction I can’t afford to have right now…no matter how much I wish things were different.

This is one road trip that will be hard to forget… 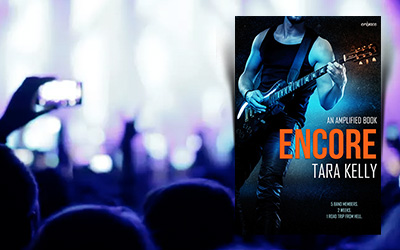 Some books feel real. Fun and raw, with every nuance in between.
That’s just how Encore felt like. And it’s more than just a book, it’s an entire experience.

I don’t know what to do about this review.
No matter where I try to start and where I want to finish, it all feels way too personal. Don’t get me wrong, I’ve never been through any of these situations described in the book, but I can relate to most of them at some level, I can understand the struggle, the frustration, just as much as I can have all that fun and as much as I can, off course, fall in love with these guys here over and over again.

Did I just tell you how fun they are?
Oh, I could kiss them right now, their presence in my mind leaves me all giddy and warm and fuzzy! And Jasmine and Sean are so sweet (I did hope for something more when it comes to them – more teasing I guess, but I enjoyed plenty what I did receive anyways). 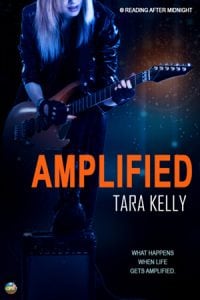 ENCORE started similar in tone with AMPLIFIED. It had me laughing so much (that my belly hurt) and caring for these characters so much more (I didn’t even know that was possible). I love their bickering, I love how determined they are, I love them for their qualities and their flaws as well. They can fight like their lives depends on it, but they are loyal and caring and at the end of the day they act like true friends, they have each other’s back.

I am one of those people that put too much heart into the things they do and enjoy. Reading is no exception. So I feel like all these characters are close friends of mine, I’ve been connecting with them so well (ever since I read the first book), and I was so excited to join them on the tour, to enjoy more crazy adventures with them. It was a bit heartbreaking, but truly  entertaining.

I am struggling to put together a proper review because this book is about so many things, besides the obvious romance – each and all important, and I was happy to see that it had so much depth. I was expecting a lighter read (as AMPLIFIED was funny and cute, a summer read indeed), this one was darker and with a lot more meaning.

As I said before, this book feels personal. I don’t know how to explain it. It’s not about what the characters do (I am not a musician in the least, though in a parallel universe that is entirely possible), it’s not about their relationships (they seem to be on and off again, having fun and fighting and getting along fine once again), not about the situations they are put through (some of them were actually quite a bit scary, but strangely I enjoyed them a lot, they kept the adrenaline pumping), but I can understand their feelings on a deep level.

Let’s see… The social media impact, how hard it might still be to be different in this world (in terms of the choices you make, the way you act or dress, the people you love, the amount of money you own or lack), the need to have the private life actually private, the need to have a voice and be listened, the snowball effect of tiny mistakes, dealing with stress and with the outcome of lies.. And then the love, the insecurity, the chemistry (apparent or real), the frustration and hope.. There is so much happening within this book.

To be honest, in terms of content I think that this book might be better than the first one. It’s true that some subjects were barely scratched over the surface (some were thrown in there and then felt like being a bit left hanging, one more books would be needed for them to be explored further *hint hint*), but ENCORE has a lot of depth nonetheless.

My favourite subject was the social media impact on girls (public figures or otherwise).

Jasmine is a confident girl, if you remember her from the first book you know that (to put in bluntly) she won’t take shit from anyone. She can stand on her own, fight for the things she likes and wants, she is outspoken (even though most of the things that come out of her mouth are censored or pure lies), she doesn’t feel like a beauty in the least, but she knows her worth (she doesn’t need a guy or other people’s approval to feel accomplished). So when all the social media nightmare started to hit her, it hit her hard. She started to overthink everything about herself and around herself, and I could understand her struggle very well.

Then there is the stalking thing going on and some other high impact situations (that some other characters got themselves thrown into as well), but I won’t speak about them because I don’t want to give away everything about this story.

The format of the book is a bit changed. We have Jasmine’s perspective, but we also have journal entries, posts from social media, reactions. It worked perfectly with the theme of the book and it still felt like being part of the same series. This might work as a standalone (it explains what’s needed to be known), but I do recommend you to read AMPLIFIED first.

I don’t remember waiting for a book longer than I’ve waited for this one. I’ve been dreaming about the moment I got to hold it in my arms. In fact I wish there was a printed edition for me to have on my shelf, not sure if one will become available – to look at, and pet it, and dive into properly. And not that reading an ebook is not ‘a proper way’ – I am so not getting into that debate, because I love my e-reader and my books just the same.

The only reason I took down half a star is because I feel that I have now even more questions than before. I didn’t get an actual closure when I reached the last page, as some aspects of the story were left open (but don’t worry, the most important one is handled here 😉 phew!). I am all for openness, but looking at the point where everything started and where they ended.. I think I am in great need of two more books, LOL!

Book source: An electronic copy has been provided by the publisher.

PS: It feels wrong to need to state that this fact did not influence my opinions (as I see in so many reviews) – because that’s why they are mine!, but based on the primary subject from the review I will assure you of this fact anyways – I did love this book 😉 Amplified is still my favourite, though this one is close enough!

PSS: I have  an acquaintance whose family name is Kiss. Yes, he is hungarian and I think the double “ss” is pronounced “sh”. Take that Sean! 😉

I keep thinking about it – how can you defend yourself against all those online shadows that do nothing more than throw bad words around from behind their keyboard, how can you keep your heart closed and cold and not feel a thing when they hit so hard such soft spots?

I am not even sure if you can…

I had a little chat with a friend of mine (maybe I told you this before in different post, I tend to repeat myself). I don’t how we started speaking of this matter, I remember that at some point it was all about how easy to influence people around us are (generally speaking) – the talk was around girls and (misleading) reputations. He told me that if he started barely hinting to other people that I might be ‘easy’, they would buy it no matter what the truth actually was. And in the beginning I was like ‘no way! no one would believe that about me!’, but the doubts then crept in and deep down I knew that he was right. People don’t see us for what we are, but for what they like us to be. And sometimes that’s too bad for us, because – sometimes – they don’t like us at all. Aaaand, when they don’t like someone, they make sure the people around don’t like them either, which is even worse because that ‘s the beginning of the spiral of hate that gets bigger and bigger… and bigger.

I always hear people pushing around their opinions on the lives of celebrities so openly and without giving the situation a second thought. Only because they read somewhere something, they take it as a fact with checking, without actually knowing and they talk about it like they are experts in the matter. They also mix the personal life with the public life of people (the job or whatever). I keep hearing, “she’s a slut, I don’t like her music” (what? why would that matter?), “he’s an ass I won’t see any of his movies” (does he act like an ass too? otherwise I don’t see the point. and maybe the character is an ass?).

I imagine waking up one day, opening my browser, my email, and getting hit by so much hate. I have no idea how and if I’d be able to manage the situation. My heart bruises easily, so in this I could relate to Jasmine. I could see myself in her shoes overreacting just as much and being just as hurt.

The same applies to Amy. Even Jasmine (or more so) is very judgemental when it comes to that girl and most of it comes from jealousy (sometimes it would have been nice to keep it only in the inside, because she didn’t do herself any favour in front of her love interest with this attitude). But the reverse is the same, so you can’t blame one without blaming the other – and that’s why I actually enjoyed reading a particular blog post inside the book. I also appreciated Sean because he was a gentleman, he defended Amy and got offended on her behalf, and that only makes me love him more.

Then I think of how would I feel to have someone shadow every movement I make. Feeling claustrophobic in my own life. Or having people judge me by my looks, choices or such (well, been a little bit there, done that). Or giving in to the darkness inside, to the frustration and the hurt, and hurting people as well in the process.

So yeah, I like this book because it feels real.
Though the settling is related to music, one can easily relate to all of it. I absolutely recommend this series.

PS: Didn’t have much luck in my search, so here I am wondering again where in this world can I find another physical copy of AMPLIFIED? Santa, do you hear me? Where are you when I need you the most?