It’s finally here. The long-awaited sequel to the bestselling Unwind, which Publishers Weekly called a “gripping, brilliantly imagined futuristic thriller.”
Thanks to Connor, Lev, and Risa—and their high-profile revolt at Happy Jack Harvest Camp—people can no longer turn a blind eye to unwinding. Ridding society of troublesome teens while simltaneously providing much-needed tissues for transplant might be convenient, but its morality has finally been brought into question. However, unwinding has become big business, and there are powerful political and corporate interests that want to see it not only continue, but also expand to the unwinding of prisoners and the impoverished.
Cam is a product of unwinding; made entirely out of the parts of other unwinds, he is a teen who does not technically exist. A futuristic Frankenstein, Cam struggles with a search for identity and meaning and wonders if a rewound being can have a soul. And when the actions of a sadistic bounty hunter cause Cam’s fate to become inextricably bound with the fates of Connor, Risa, and Lev, he’ll have to question humanity itself.
Rife with action and suspense, this riveting companion to the perennially popular Unwind challenges assumptions about where life begins and ends—and what it means to live. 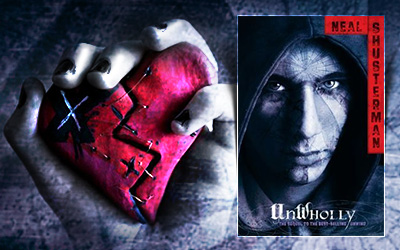 A few years ago I read my first dystopian book (Unwind) and it really blew my mind.
The world settling, the characters, the storyline, everything was perfect and in that moment I wished for the book to be part of a series.

My wish came true:  a sequel (for one of the most emotional stories) finally found its way to my door and I was able to enjoy once more the terrifying world of unwinding.
Truthfully, I don’t think this story needed a sequel, but of course I did enjoy every single word.

♥ The amazing world building:
It is horrifying, it will disgust you, it will give you goose-bumps and nightmares.. but you will love it.
This is a sick pleasure, my friends, loving a world that can bring so much pain, a world were people are nothing more than the sum of their parts, a world in which people might decide that you are better if scattered around the world – every piece in another corner, until you turn to nothing (maybe just your soul, if you believe in having one).

But you know all this from the first book, what’s new in this story is how all different pieces (human bits) might come together and form something unique, something with or without a soul, something unnatural – a new identity forged from the shadows of what once were some poor unwinds.

“He only wishes there were something that would heal the scars in his mind, which he can still feel. He sees his mind now as an archipelago of islands that he labors to build bridges between – and while he’s had great success engineering the most spectacular of bridges, he suspects there are some islands that he’ll never reach.”

♥ Some of our old characters:
Meeting again the characters from the first book brought me so much joy.
I didn’t realize how much I’ve missed them until I saw them again.
I loved Lev in particularly. His story was full of suspense and his troubled girl made for a wonderful addition to the wonderful pack of characters we already had. They were both cute, quite funny, but also strong and determined.

♥ The need to read more:
If the first book was doing great on its own, as a standalone, this one needs a sequel really badly. We’ve got some unfinished “businesses” over there and I really want a happy ending for my beloved characters.

THE NOT SO VERY

There were some predictable moments, but they didn’t take away the pleasure of reading this. What I didn’t like that much was how some characters turned out to be (with me wanting for them a happily ever after):

Also the action was really slow. For a while I felt that nothing really happened; and there’s the fact that the timeline was not so well defined (going back and forth in a strange way – al least for me it felt just a tiny bit off).

The thing is that this is the beauty of this story.
Neal does not deliver happiness with his words, he gives you raw, brutal moments that take your breath away. His characters are flawed, do mistakes, but in this they actually feel real. They struggle, they suffer, they hope. And you do the same with them while following their paths.

“Either things happen for a reason, or they happen for no reason at all. Either one’s life is a thread in a glorious tapestry or humanity is just a hopelessly tangled knot.”

I can’t wait to get my hands on the next book and see how the story ends.
I told you, as horrific as so some scenes might be, this book is pretty addictive and I can’t get enough of my favorite characters.

Dear Neal, please keep them safe, and if it’s in your power, please don’t kill anyone that you think I might like 🙂