Under the bubbling hot springs and geysers of Yellowstone National Park is a supervolcano. Most people don’t know it’s there. The caldera is so large that it can only be seen from a plane or satellite. It just could be overdue for an eruption, which would change the landscape and climate of our planet.
Ashfall is the story of Alex, a teenage boy left alone for the weekend while his parents visit relatives. When the Yellowstone supervolcano erupts unexpectedly, Alex is determined to reach his parents. He must travel over a hundred miles in a landscape transformed by a foot of ash and the destruction of every modern convenience that he has ever known, and through a new world in which disaster has brought out both the best and worst in people desperate for food, water, and warmth. With a combination of nonstop action, a little romance, and very real science, this is a story that is difficult to stop reading and even more difficult to forget. 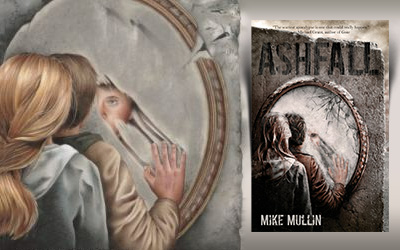 hu·man·i·ty, noun, plural -ties.
1. all human beings collectively; the human race; humankind.
2. the quality or condition of being human; human nature.
3. the quality of being humane; kindness; benevolence.[cite] [cite]Define survival: sur·viv·al, noun
1. the act or fact of surviving, especially under adverse or unusual circumstances.
2. a person or thing that survives or endures, especially an ancient custom, observance, belief, or the like.

Define monstrosity: mon·stros·i·ty, noun, plural -ties.
1. the state or character of being monstrous.
2. a monster or something monstrous.

Define Monster: mon·ster, noun
1. a legendary animal combining features of animal and human form or having the forms of various animals in combination, as a centaur, griffin, or sphinx.
2. any creature so ugly or monstrous as to frighten people.
3. any animal or human grotesquely deviating from the normal shape, behavior, or character.
4. a person who excites horror by wickedness, cruelty, etc.
5. any animal or thing huge in size.

I finished reading the book, then the author’s notes at the back, and still I kept thinking about this all… I felt so sad, I can’t even put into words how much disappointment and anger I have felt. Not for the book, or the characters, but for the whole damn human kind.

Like the character in this book, I felt ashamed… Because what would we be without our humanity?

Would we be better than anything surrounding us? Because we keep thinking that we are the kings of the world, but are we?

How low can you get when you’ve already hit the bottom?
How fast can you run, when you have nowhere to go?
How long can you survive when the nature rebels against you?
How hard would you bite the hand that have fed you?

“For the first time ever, I felt ashamed of my species.
The volcano had taken our homes, our food, our automobiles, and our airplanes,
but it hadn’t taken our humanity. No, we’d given that up on our own.”

In a world that doesn’t resemble at all the world as we know it, where it is raining with ash, and it’s freezing to death, and sun is only a memory from before the volcano eruption, Alex has one purpose: to find his family that left him behind (there was no drama in the act: in fact they just left him at home for the weekend while they went visiting some relatives. It was supposed to be just another weekend – casual, sunny, not different from all the others.. only the eruption has changed everything), but his journey is not as easy as he might think.

After the eruption people are starting to starve, and they transform themselves in predators, they hunt, they steal, and they kill. They have weapons and they are not afraid to use them, because when there is only one mouthful of food, nobody wants to share it with strangers.

In one encounter with such a beast, Alex finds himself face to face with death, and it’s only because of an wonderful woman (Mrs. Edmunds,) and her daughter Darla, that he is still alive. But a price is needed to be paid. And when tragedy strikes, Alex and Darla has no one but themselves, and they need to stay together and work together hard to stay alive.

I liked their relationship and the way they tried to help each other.
Of course, sometimes they were just lucky, some other times it was all too good to be true, but in the end it felt so damn real, and it hurt so badly to witness this madness called survival. It’s a tricky thing to survive, because your life might mean the death of someone else, and if you are not strong enough to kill, then you might be weak enough not to survive…

So where do you draw the line between humanity, sacrifice, and survival?
Are you human enough to leave someone die by hunger/cold, are you strong enough to sacrifice a dear animal just to have something to eat, are you enough of a beast to kill someone before he kills you?