One of Us is Lying

The Breakfast Club meets Pretty Little Liars, One of Us Is Lying is the story of what happens when five strangers walk into detention and only four walk out alive. Everyone is a suspect, and everyone has something to hide.

On Monday afternoon, five students at Bayview High walk into detention.
Bronwyn, the brain, is Yale-bound and never breaks a rule.
Addy, the beauty, is the picture-perfect homecoming princess.
Nate, the criminal, is already on probation for dealing.
Cooper, the athlete, is the all-star baseball pitcher.
And Simon, the outcast, is the creator of Bayview High’s notorious gossip app.

Only, Simon never makes it out of that classroom. Before the end of detention, Simon’s dead. And according to investigators, his death wasn’t an accident. On Monday, he died. But on Tuesday, he’d planned to post juicy reveals about all four of his high-profile classmates, which makes all four of them suspects in his murder. Or are they the perfect patsies for a killer who’s still on the loose?
Everyone has secrets, right? What really matters is how far you would go to protect them. There are books that keep me up all night.

You know that feeling when you want to read faster than light, eager to see how things end, but in the same time you want to keep a very slow pacing such that you can savour each word, each character, each turnaround?

“One of Us is Lying” was all that and more, because I got attached to these 4 characters and with every switch of point of view I hoped for each narrator not to be ‘the one’. I dreaded the moment when all would be revealed… at least until I saw where the story was headed. Then I was curious to see how exactly it would come to that.

“She’s a princess and you’re a jock,” he says. He thrusts his chin toward Bronwyn, then at Nate. “And you’re a brain. And you’re a criminal. You’re all walking teen-movie stereotypes.” 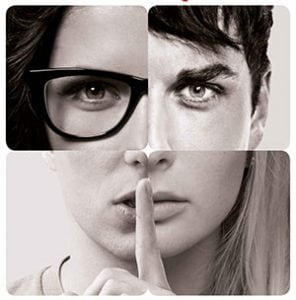 Though the characters seemed a bit cliché at first sight (you know, the usual American cast: the nerd, the ‘criminal’, the popular, the athlete; and in fact, the same applies for the victim – the outcast) somehow they won me over with their stories, their fears, their secrets.

All through the story I asked myself the same questions over and over again: was that secret big enough, would have been worth killing someone for such a thing? Was the character driven enough to risk everything? Was Simon annoying enough that I would want to virtually kill him myself? (oh, such a dark thought, but I absolutely despised him!)

There is also growth when it comes down to these four, at the beginning they were like some cardboard characters, but they started to become more and more three-dimensional, adding more layers to their backbones until I fell for them, I cared for them, I feared for them.

“Things’ll get worse before they get better.”

And the twists? They were at times insane, with a sense of urgency due to the change of POV, a thing that I actually loved about this book. It kept me on my toes. I am not good at this guessing game, so I don’t read many mysteries as it frustrates me how – usually – my favourite character is the faulty one, LOL, but this time around I had a lot of fun trying to figure our what happened and how it happened. There was a bit of a stretch at some particular point, but hey, it’s the ride that counts!

Honestly, this was such an addictive story.
McManus is a writer I will keep an eye on, because the writing was engaging and fun and I can’t wait to dive into another book just as great.

“I know what it’s like to tell yourself a lie so often that it becomes the truth.”

2 responses to “One of Us is Lying”