Lil has come to terms with her life as a Guardian/demon hunter and the wielder of the Nephilim most powerful weapon-the Kris Dagger. She trains everyday to master her growing powers, gets along with her Guardian trainee friends, most of the time, and cherishes the time she spends with her human friends.
Just when she feels she belongs, her nature-bender father contacts her and warns her about a betrayal by someone close to her. Then Bran, the boy she loves, starts to act strange and one of her human friends acquires a supernatural ability. While Lil struggles find a connection between these three things, she begins to realize that someone is manipulating her and will stop at nothing, including hurting those she loves, to lure her to the dark side. 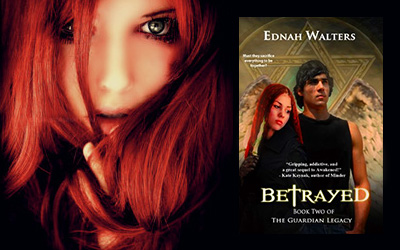 I liked this book, in fact I LOVE this series!
Coming back to this story felt like meeting with an old good friend of mine – I remembered some of the things I liked in the first story and I got to know a lot more new interesting things from this one.

It was nice to be in Lil’s head again – she is usually a bit sarcastic, a bit stubborn and a lot of fun to hang out with, and there is something about her tone that makes it easy to connect with her. She is honest and always speaks her mind, she is very caring and she never says anything mean to the people surrounding her (not out loud anyways), she always tries to help and doesn’t complain much (or at least not on the outside).

Off course she had some difficult situations to get through and the rocky relationship with her boyfriend doesn’t make it easier.. Add to this the fact that her evil father is shaking her trust in the people she loves the most and you will get a better picture of the troubles she can get into.

But the good thing is that she is surrounded by great people.

1 . Her grandfather
He is one character that I really loved in the first book and he cares for her a lot and tries to protect her in every possible way. He is her only relative (except for her father) and they are really close. I wished that she didn’t keep so many secrets from him, and he didn’t keep as many from her, but anyways they still trusted each other and they were always trying to help one another.

2. Bran – well, he is great and they were a really cute couple. It was nice to see them at their best, and it was hard to see them starting to fall apart, but the truth is that he really loved her, and no matter what, he was always one kiss away from her. Any time she needed him, he found a way to be there for her. Now I won’t even start talking about how secrets can ruin a good relationship because you will see it for yourselves, but they really need to learn not to keep so many secrets. There were some moments when I wanted to shake them both and show them what was plain obvious, but hey, that’s part of their charm, right? And when they were not fighting or not trying to stay away from each other they were simply adorable.

3. The friends – we have human friends (I don’t remember the number, but I’ll tell you this: they are great, even though their part in the story is smaller this time – I loved the most the epilogue), and also we Guardian friends – 4 of them, with different personalities and a voice of their own. They kept arguing in a more-or-less friendly way, and they were so damn funny with their irony and sarcasm, BUT when they had to fight they made a great team, they could trust and count on each other, no matter what. And when they had a problem, they tried to find a solution together, to see both sides of the story, and to find the truth behind all the secrets and mysteries… I wanted to kiss them for being so great.

4. There were other secondary characters and I felt like they were important too. I got to know them, to care for them, and when Lil started to question the loyalty of all those people I couldn’t not feel her pain, and struggle, because I wanted so badly for them not to be guilty, I didn’t want to lose my trust, my love for them.

Other things that I liked:

a. the action – this book as long as it is, it is full of action. In fact it would make a great movie too. It is fast paced and there’s always something interesting happening, and some mystery to solve, and some clues get you to the wrong conclusion, and then you start thinking again who the traitor might be, and you start to get suspicious of everyone, and in between some more fights you find more clues, and… it’s simply awesome.

b. Nice evil character – well, this doesn’t sound right, but what I mean is that I really liked how manipulative the evil guy was and how his plan came to an end. I hate it when someone in a story is evil just because the good characters need to have someone/something to fight against but still there’s no meaning behind his acts. In this case he had his plan, his reasons and he just needed to make it happen no matter what – and so he did.

c. No love triangle – even though I had my doubts in both books, I was so relieved that it was not the case.. thanks God.
Don’t get me wrong, I like Sykes, but I see him more as a friend for Lil (glad to know she thinks the same), and I think that he and Kim would make a cute couple as well 🙂

d. Sunshine – I should have started with my love for this cute nickname… I love it, and every time Bran called Lil “Sunshine” I got this stupid grin on my face.. it felt like he was talking to me and it made me happy 😀

There are still some more questions to be answered, and I want to know more about Bran’s past, but the ending screams “Next!”, so I’ll be waiting patiently for it.