The human race is all but extinct after a war with Partials–engineered organic beings identical to humans–has decimated the population. Reduced to only tens of thousands by RM, a weaponized virus to which only a fraction of humanity is immune, the survivors in North America have huddled together on Long Island while the Partials have mysteriously retreated. The threat of the Partials is still imminent, but, worse, no baby has been born immune to RM in more than a decade. Our time is running out.

Kira, a sixteen-year-old medic-in-training, is on the front lines of this battle, seeing RM ravage the community while mandatory pregnancy laws have pushed what’s left of humanity to the brink of civil war, and she’s not content to stand by and watch. But as she makes a desperate decision to save the last of her race, she will find that the survival of humans and Partials alike rests in her attempts to uncover the connections between them–connections that humanity has forgotten, or perhaps never even knew were there.

Dan Wells, acclaimed author of “I Am Not a Serial Killer,” takes readers on a pulsepounding journey into a world where the very concept of what it means to be human is in question–one where our humanity is both our greatest liability and our only hope for survival. 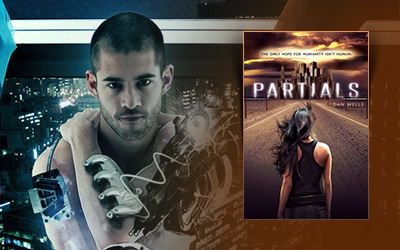 Oh, wait while I find my mouth under my bed where it dropped.

..So, are you ready for this wonderful journey into the future?
Here we go…

It all came down to a war – the worst of them all.
It was not between humans, but between them and the Partials.
Because what if robots didn’t look like robots anymore?
What if they looked exactly like humans? What if they were genetically programmed and made into the best weapon alive, a dangerously thinking one? Breathing flesh-and-blood robots meant to kill – stronger and faster than us.
What if they’ve decided to take over the world?
What if they’ve almost succeeded?
What if humanity would be collapsing each day?

And so the story begins…

“I lost my father, my mother, my wife, my children, my friends, neighbors, patients, colleagues, students. I was in a hospital at the time; I watched it fill up and spill over until there weren’t even enough survivors to carry away the corpses. I watched my entire world eat itself alive, Walker, while you were playing with your dolls. So don’t tell me I’m not doing enough to save the human race, and don’t you dare tell me we can risk another Partial War.”

It’s not only that the premise was absolutely wonderful; it’s the fact that the whole book is so amazing.
I am not going to tell you too much about the story, because you need to read it by yourself, I am just going to keep telling you about all the things I liked about it.

Yes, I must confess that it was a bit slow for my taste in the first half, but by the ending I needed to remind myself to breath – because the action was breathtaking, with so many turnarounds, so many new informations about the this world, and the insecurity was killing me (not knowing who’s bad, who’s god, who’s gonna betray next).
There were so many questions I had not only about the Partials but also about the humans. I got some of the answers, but also the number of questions started to grow with every page, keeping me on the edge of my seat.
There were many people comparing this series with Newsflesh by Mira Grant, and they are quite right. I thought about it too while reading this book. There is this big challenge to find a cure, and to discover all the dirty politics and the people behind them all. It also has the same feeling and many of you might like it just as much. I know I did.

“It had been easier, in some ways, when Kira was a kid and the Partials were the big bad guy. Everything terrible that had happened could be explained, and while the explanation might be scary, at least it was simple. Darkness was clearly divided from light. These days… Kira had no idea who the enemy was, or who you could blame, or who you could trust.”

There were not many characters that I got to really care about, but for the first time it didn’t bother me (there were many other things to keep me entertained).

From the beginning we are introduced to Kira and her friends and family. I really liked her for being smart, strong, and mature for her age. Even though some times her actions brought her more trouble then needed, she always had the very best intentions. She cared about her people and the future of humanity.
Her story with her boyfriend didn’t hold my attention, but it helped us see another side of her. Also, all her discoveries were surprising even for me, and now I am more interested then ever to know her better.

“Was that your plan?” asked Kira bitterly. “To use us as slaves? As labor to maintain your infrastructure?”
“You mean the same thing you have done to us?”

Talking about intriguing characters, I should mention of course Samm – a Partial about to turn Kira’s world upside down. Every time I thought I’ve figured him out something happened, changing my mind completely (not always in a good way, but still).

There are some pieces missing from this puzzle, but this was a great first book in the series, and I can’t wait to find out what happens next. I am all on the Partials’ side, but still I want our people to survive, so I’m a bit conflicted.

“Forget love, forget freedom, forget choice, just get yourself knocked up and save the damn world already”

Anyways, if you want a story full of adrenaline and plot twists, this one is for you. A great dystopian, post-apocalyptic world that promises a lot in the next installments 🙂

Book source: ARC from the publisher via Netgalley. Thank you!