Fourteen-year-old Stark McClellan (nicknamed Stick because he’s tall and thin) is bullied for being “deformed” – he was born with only one ear. His older brother Bosten is always there to defend Stick. But the boys can’t defend one another from their abusive parents.
When Stick realizes Bosten is gay, he knows that to survive his father’s anger, Bosten must leave home. Stick has to find his brother, or he will never feel whole again. In his search, he will encounter good people, bad people, and people who are simply indifferent to kids from the wrong side of the tracks. But he never loses hope of finding love – and his brother. 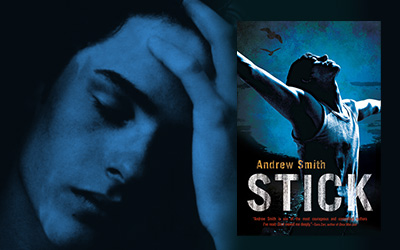 “Heartbreak” – that’s how they call it.

I never seem to know how happy I really am, how lucky I am, what a wonderfully happy life I’m living, what a serene childhood I’ve had (with its ups and downs) until I read a story like this one. Because you never know what you have until you see how would it be without it.

You see, I am a horrible reader. I asked for an ARC a while back and I got one, but then I got scared. I knew this was supposed to be a though read and I’ve postponed picking it up ever since.. Right until now.. Months later. I am not sure if what I did was wrong though, because in fact I was right: this story was though, it was heartbreaking, it killed me a bit and it was totally worth it.

But the heartbreaking part is that the story itself is not always sad (ironic much?). It gives you some moments to breathe, to relax, it makes you think that things might get beter and then it just leaves you gaping for air after another shocking scene.

So yes, there were some cute moments about growing up and noticing changes on your body; about boys starting to become teenagers and about them noticing girls (and women), about falling in love for the first time, doing crazy stuff, kissing older girls, stealing cars and running away.
There are also secrets kept safe and promises that might be broken, there is also friendship and love.. there are dreams, not only nightmares.
I even couldn’t stop laughing at some scenes, because I’ve been friend with boys and I know similar funny stories about them, so as far as I’m concerned some scenes were pretty much realistic, even though these days it is easier to find some answers for all the question you might have.

The characters are of course the best part of the story, so I’ll talk a bit about them now…

Stick
Oh my, Stick – such a cute little boy!
You see, at the beginning he was so shy and scared and didn’t know what to do, how to defend himself in front of the others.
He’s missing an ear and he thinks this makes him ugly. It’s hard for me to trust him with this, because reading his thoughts he seemed to be such a beautiful boy – no one with such a big heart and so honest feelings can be ugly, no matter what.
He was bullied by his colleagues and at home it was even worse. He tried to be though like his brother but he couldn’t; I wish I could tell him that crying doesn’t make him weak, that he was strong, that he deserved more.

“I’d tiptoe everywhere. I couldn’t ever hear myself, but I wondered how noisy I made their world, them having two ears and all.”

But by the ending, he got to really have a voice of his own and those thoughts weren’t imprisoned in his mind anymore, running in circles. He left them out, he released that pressure, he grew up in only a couple of months and I was so happy for him. I wish him now all the happiness in the world!

Bosten
I loved how close Stick and Bosten were, I loved how they tried to make things better, how they stood for each other, how there was trust between them and love, and how everything was possible as long as they were together. They were for each other like a tiny piece of Heaven in this Hell.
You must know that there were many really disturbing things in this book, one of them is Bosten’s story – as his relation with his father got only worse. It was just too much (like it wasn’t already way too much) and I cared so much for Bosten because I saw him lose it near ending and I wanted to shake him, to make him see how he was hurting his brother too (without meaning it), the only person he tried so hard to keep safe (as safe as he could anyway).
But I forgive him because I understand his situation, I get that he couldn’t take it anymore, that he needed to go, to break free, as far away from his father.. even though for once it meant leaving his brother behind (and this is not a spoiler, as you can find it in the synopsis as well).

Emily was the cutest girl ever, the best Stick could have found. They were both so sweet they broke my heart, but in a good way. She was smart and kind and so lovely. Stick had some happy moments just because of her and for this only I love her even more.
If I were to be young again I wish I’d be her: so bold, straightforward, so loyal and cute.

The parents
Do people like this deserve to live on this world?
DO THEY?!
And if the answer is yes then please tell me WHY?
Why on Earth could these monstrosities of people deserve to breathe, when all that I wanted was to choke them to death, to kick them until there would be nothing left but dust?
That’s a dangerous though that doesn’t say much about me, because thinking like that I might not be so much better than them, but I got so damn angry! I wanted to scream at some scenes, I wanted to cry with the kids, I wanted to take them home with me, I wanted to show them that life can get better, can be better, that they deserve more, that they can (should!) have more.

It pained me to see how good Paul’s mum (as a side note, I liked her a lot until I just.. didn’t anymore) and Emily’s were with Stick, in fact with them both. There was such a big difference and I wanted to make these kids realize sooner that what they were living at home was a nightmare and it shouldn’t have been like that at all. Their definition of normal was wrong – this was normal: people caring, talking nicely, hugging, and showing their love.

The strange thing is that I had tears in my eyes reading about their first trip to California and how nice their aunt was. I didn’t cry at those terrible scenes from back home because I was too horrified for my brain to order to my eyes to come up with some tears, but it seemed to manage that pretty well while reading those happy pages… Because the difference was too big, their realization too hard, because they deserved to have this instead as a ‘normal’.

Their friends from California were really cool as well. I loved how they made them feel at ease, how they became friends so easily, how they showed them how to surf and have a wonderful time.

“The strange thing was how much it seemed to me like I was really home, maybe for the first time in my life.”

There is a lot to talk about regarding this book and these awesome characters, but I want you to discover it stept by step. The only thing I can complain a bit about is the ending, as it felt so abrupt. But anyways, I loved and hated this story with all my heart, because this is what a wonderful story does to you.
But now what? What could I read to make my heart whole again, to smile after all these tears?
…Now what?

End note:
This book reminded me of Split, so if your heart can take some more, than maybe you should give it a try.
Also, I received this book for review from the publisher (via Netgalley), so thank you very much!

Book source: Advanced copy received from the publisher via Netgalley. Thank you!