in Dreaming after Midnight

“ I like that about art, that what you see is sometimesmore about who you are
than what’s on the wall. I look at this painting and think about how
everyone has some secret inside, something sleeping like that yellow bird.”

What do we know about Shadow?

His real name is Ed and he is what I would call a night-artist, the one that leaves his marks on the walls and makes you wonder what’s his story.

#1: He can see the world in a better light and he shows it to us through his paintings:


“ I was nothing inside but light and color.”
“I spray the sky fast. Eyes ahead and behind.
Looking for cops. Looking for anyone I don’t want to be here.
Paint sails and the things that kick in my head scream from can to brick.
See this, see this.
See me emptied onto a wall.”


“Her words are paintings, and I’m painting them on the wall in my head as she talks”

#3: He has messy hair, but who doesn’t these days in YA stories?


“I liked that he had hair that was growing without a plan. A grin that came out of nowhere and left the same way.”

#4: He makes girls dream about him:

“I imagine what shadow looks like: paint spattered clothes, a face that’s got a million ideas running underneath it” [about Shadow]

“Every time he looked at me I felt like I’d touched my tongue to the tip of a battery.[…] I had nothing in common with a sheddy like him, but a girl doesn’t think straight when she’s that close to electrocution.”[about Ed]

#6: Now seriously, wouldn’t you want to see him driving a pink love van?


“Tell me this isn’t the getaway van.”
“Don’t worry. It’s better than it looks.”
“It looks like a pink van with Free Love written on the side in huge letters” 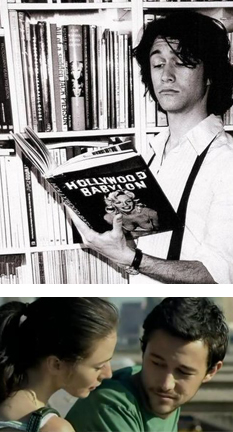 Cons:#1:He has some troubles with written words, that’s why he chooses to speak through his art.

#2: He is known for ruining big time the first date with the girl he loves, but we can definitely give him a second chance, right?


“You say pretty much whatever’s in your head, don’t?
It’s better than saying nothing, which is what you said on our date.”

So, why Joseph Gordon-Levitt?

20 responses to “Dreaming after Midnight (#4) Shadow”