Through the Ever Night

It’s been months since Aria learned of her mother’s death.
Months since Perry became Blood Lord of the Tides, and months since Aria last saw him.
Now Aria and Perry are about to be reunited. It’s a moment they’ve been longing for with countless expectations. And it’s a moment that lives up to all of them. At least, at first.
Then it slips away. The Tides don’t take kindly to former Dwellers like Aria. And the tribe is swirling out of Perry’s control. With the Aether storms worsening every day, the only remaining hope for peace and safety is the Still Blue. But does this haven truly exist?
Threatened by false friends and powerful temptations, Aria and Perry wonder, Can their love survive through the ever night?
In this second book in her spellbinding Under the Never Sky trilogy, Veronica Rossi combines fantasy and sci-fi elements to create a captivating adventure-and a love story as perilous as it is unforgettable. 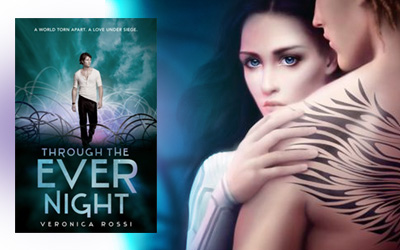 To talk about this book.. Well I could write another novel about it, to be honest, as there are so many things to speak of – all of them great, be assured.

It was just as beautiful as the first one! The world as dangerous, the characters just as fleshed out, also it felt like there was even more action than in the first one – not to mention that there is no love-triangle to bother me, for this alone it deserves all these stars and even some more.

The characters have grown so much, I am amazed by their depth. We follow them through the story and they become more and more complex, we discover other sides of them and we can never get enough of their presence. Of course this is Aria & Perry’s story, but Roar is just as important here and I am sure that I am not the only one wanting more scenes with this great character.

I was so deeply involved in this book that I really couldn’t put it down. I just kept reading and reading even though I wished to read slowly, to savour each and every word.. I just simply couldn’t, there was this urgency I felt to keep going through the story, I tell you: it had me mesmerised.

“Love was like the waves in the sea, gentle and good sometimes, rough and terrible at others, but that it was endless and stronger than the sky and earth and everything in between.”

The storyline is full of turnarounds and cliffhangers make an appearance at the end of each chapter (that’s another reason why this book is ‘undownputable’ – is this really a word?).

More things that I liked: 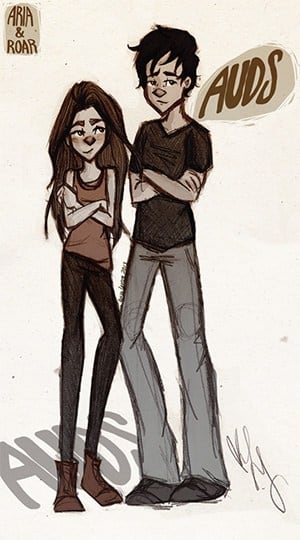 – The accommodation Aria went through in the Tides and the way she was perceived by the tribe, the way they acted in her presence, the way some showed their disgust and hate towards her. It was hard to watch, but it couldn’t have been avoided and I was happy with each little step that she took towards them.

– The road Perry has to take in order to be accepted as a leader, a path full of disappointment, of mistrust and betrayal – such a frustrating journey indeed. (it reminded me of the second book in “Across then Universe” series and it was just as hair-grabbing and it made me scream in frustration just as much)

– The journey to the north and the heartbreak that followed (unfortunately I can’t say anything about it as it would be a major spoiler, but my heart broke a bit for what happened there, and also it hurt to see the disappointment that Perry felt – I feared that he would be manipulated –more than he actually was– , but at least that didn’t happen.. Again I can’t say much about this but it was important so I had to say a few words).

– The story behind the Still Blue and Aria’s old home: some characters from the first book that make an appearance here, characters we don’t know if to trust or not. To be honest, all side characters were amazing, in the Tribe too there were some that I found to be really cute, funny and a great addition next to our favourite trio.

“He’s so unlucky it’s almost lucky,” Gren said. “It’s like he has reverse luck.”
“He’s reverse good-looking, too” said Hyde.
“I’m going to reverse punch you,” Strag said to his brother.
“That was reverse smart, man. It means you’re going to punch yourself.”

– Again, there is the story of Roar, as he is as much part in this story as Aria and Perry. There is so much to say about him and there is so much heartbreak in his side story (too bad we didn’t have his POV too, it would have been great to be in his mind for a while). I really wanted to hold him in my arms and take his pain away. But there were also many funny moments with him – I tell you, I wouldn’t trade this character for anyone in this written world.

“Come thaw my frozen heart, my little arctic kitten.”
Unable to resist, Aria jumped in and picked up the next line. “No chance, my yeti man, I’d rather be frostbitten.”
“Let me be your snowman. Come live in my igloo.”
“I’d rather freeze to death than hibernate with you.”

– The writing is just as great if not better. There is the same mystery with the added urgency, there is this difference of tones when it switches narration, it’s great and I fell even more in love with this world, I really did.

CONCLUSION: One of the best sequels (the humour, the drama, the action, the romance – everything was absolutely great!). I am so happy that I got to finally read these books as they are simply amazing!

PS: Just saying – I think that the UK cover (the one I also own) would have been better suited for “Into the Still Blue” – which is purple-ish and I have no idea why.

4 responses to “Through the Ever Night”