Into the Still Blue

The earth-shattering conclusion to Veronica Rossi’s “masterpiece” Under the Never Sky trilogy and sequel to the New York Times bestselling Through the Ever Night (Examiner.com).
Their love and their leadership have been tested. Now it’s time for Perry and Aria to unite the Dwellers and the Outsiders in one last desperate attempt to bring balance to their world.
The race to the Still Blue has reached a stalemate. Aria and Perry are determined to find this last safe-haven from the Aether storms before Sable and Hess do-and they are just as determined to stay together.
Meanwhile, time is running out to rescue Cinder, who was abducted by Hess and Sable for his unique abilities. And when Roar returns to camp, he is so furious with Perry that he won’t even look at him, and Perry begins to feel like they have already lost.
Out of options, Perry and Aria assemble a team to mount an impossible rescue mission-because Cinder isn’t just the key to unlocking the Still Blue and their only hope for survival, he’s also their friend. And in a dying world, the bonds between people are what matter most.

In this final book in her stunning Under the Never Sky trilogy, Veronica Rossi raises the stakes to their absolute limit and brings her epic love story to an unforgettable close. 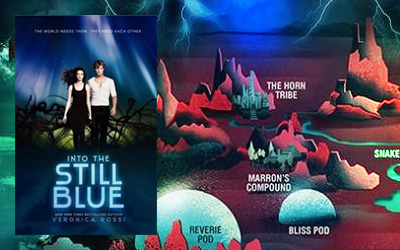 I am not sure why it took me this long to review this book. Lately I’ve been struggling to find my words. And it is even harder with books that have tons of reviews already – what can I tell you that no one has before?

We started this thing together. That’s how we’re going to finish it.

This is indeed a wonderful story, I am only sorry that I didn’t pick it up sooner, though it felt delightful to read all the books together and spare the pain of waiting. Don’t be fooled, the missing star does not mean that it is not as great as the previous ones. It’s just that there were some very convenient things that made it a bit less realistic or too good to be true at times.

Still, I loved it just as much. The action was keeping me on the edge page after page, as for the characters – Aria, Perry and Roar are simply some of the best characters out there. They have their own flaws, but even that makes them perfect. I really wanted to know more about their new life in the Still Blue, as I really didn’t want this story to end.

We’ve all been waiting to see where their emotional journey might take us, what dangers will they find on their way, what compromises will they need to make, and how many hearts that might break. You see, there are times when you just can’t save the whole world, there are times when you need to decide who should survive – and those are the very hard ones. All the communities we’ve met in the previous books need to cooperate in order to survive when their world starts crumbling all around them, and one can only fear for each and every character and their safety. There is a lot of plotting and planing which leads to a lot of action and some turnarounds. You don’t know which side people will take, so loyalties are tested, and the anticipation is what makes the book even better, because you are holding your breath the whole time.

Hundreds of years ago during the Unity, there’d been a selection to choose those who’d take shelter in the pods and those who wouldn’t. It had divided their ancestors and his, but she couldn’t let that happen again. How could she value one person’s life over another?

And still, this series stands out because it is full of flashed out characters. All of them. Even the ones you might ignore for a while, they all have depth and they all react when faced with hope or the loss of it, with joy or pain, with achievements or with disappointments. The complex relationships between them are strong, the ties can not be easily broken, and you can actually feel them, feel their emotions not only while reading, but afterwards too.

It’s not a secret that I loved to pieces the relationships formed between Aria, Perry and Roar. They’ve had their ups and downs but they were so loyal, they loved each other so much (Aria and Perry as a couple, Roar as a best friend, as part of the family). It was all so open, it felt all so real. They’ve grown a lot through the story and they are the proof that a good book can be even better without the frustration a love-triangle (good call, Veronica!). There is nothing more beautiful than a pure love and a true friendship, and Veronica created in this way one of the best trio I’ve read about. Yes, they struggled with their own problems, with their own inner demons and miscommunications, but there was no unnecessary drama – everything that happened had a purpose and their mistakes made them only stronger and their relationship tighter.

“What I was trying to say,” he whispered, “is that I see you in everything. There isn’t a word for you that means enough, because you’re everything to me.”

And then there are the other characters too.
Take Soren for example, who would have thought that I would end up liking him, when I hated his guts in the first book? But he has grown into something good, it wasn’t an over-the-night change, this is why I got so attached to him – I wan’t fooled into liking him, his own actions made him likeable. Same goes for Brooke, a character I was highly skeptical of, but she proved to be so much more.

“Roar’s mouth pulled into a smile – a beautiful smile she hadn’t seen in weeks.
“Beautiful, huh?”
She drew her hand away, giving him a small push on the shoulder. “Don’t act surprised.”
“I’m not. Always nice to be reminded, though.”
“I give up,” Soren said, shaking his head. “Congratulations. You two are the first code I can’t break.”

Sable too, as evil as he was, kept true to his personality. I did wonder why the others underestimated him a few times over the course of the story, but I guess that danger and heartbreak were necessary to create the awesome suspense this book was filled with.

Still, I wanted a bit more development when it came to Cinder. He was one of the most important characters in the story; I had a feeling from the beginning but I didn’t consider much the risks, the sacrifices that will be needed on the way. The first half of the story was about getting him back, but I it felt like everyone wanted this boy only for his powers, and that was a bitt frustrating for me, as I wanted to scream at them to really see him: so small, so scared, so innocent, the seed of hope but also so much more.

I will probably not spoil anything by telling you that the story ends on a good note, it gets the characters to where they belong and after all the storms in their lives there comes the sun shining right above them all. Still somehow it felt rushed, a tiny bit convenient, and it didn’t fully make justice to the awesomeness of the whole story. Or so it made me feel.

But all in one, this was a great ending to an even greater series. I hope that you enjoyed it just as much.. and if you didn’t get to read it (or the series), well..  what are you waiting for?!

Book source: ARC received for review from the publisher, thank you, though I also own the UK edition.