Perfect for the fans of Shatter Me who are desperately awaiting the release of Unravel Me, this novella-length digital original will bridge the gap between these two novels from the perspective of the villain we all love to hate, Warner, the ruthless leader of Sector 45.

In Tahereh Mafi’s Shatter Me, Juliette escaped from The Reestablishment by seducing Warner—and then putting a bullet in his shoulder. But as she’ll learn in Destroy Me, Warner is not that easy to get rid of. . .

Back at the base and recovering from his near-fatal wound, Warner must do everything in his power to keep his soldiers in check and suppress any mention of a rebellion in the sector. Still as obsessed with Juliette as ever, his first priority is to find her, bring her back, and dispose of Adam and Kenji, the two traitors who helped her escape. But when Warner’s father, The Supreme Commander of The Reestablishment, arrives to correct his son’s mistakes, it’s clear that he has much different plans for Juliette. Plans Warner simply cannot allow.

Set after Shatter Me and before its forthcoming sequel, Unravel Me, Destroy Me is a novella told from the perspective of Warner, the ruthless leader of Sector 45 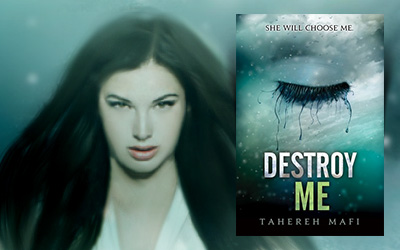 I saw right through him.

You see, I love it when my heart is right.. and right now it still loves Warner to pieces.
Yes, he’s the bad guy.
No, he doesn’t need to convince me otherwise.

If I liked this amazing and complex character in Shatter Me, well now I feel like I’ve been bewitched by him, his dark mind, his fears, and his struggle. I repeat, Warner is not a good person, the world didn’t make him good, the world was not good to him either.. But deep down he had feelings, and I loved the sound of his breaking heart..

Also, seeing the difference in writing, somehow all the confusion and struggle form the first book made sense. Juliette and her disturbed mind mean so much more to me now that I see inside Warner’s head, his calculated (almost sophisticated) way of thinking, his elegant way of speaking.

God, how different these voices can be: Warner and Juliette. I love what the author did here, how she could bring to life such fleshed-out characters, so different but so well defined. This is exactly what I like about an author: to be able to convince me that I’m reading the character’s words and not her/his own.

Also, I can now appreciate so much better Shatter Me, because I understood a few things I didn’t like back then:

1. The obsession with numbers.
Juliette counted her life in numbers, in breaths, so now it makes sense that she always wrote the numbers the way she did.. Her head is full of them – counting and counting, because that’s all that’s left of her. Warner on the other hand is building imaginary walls, securing his mind, emptying his heart when he needs to stay focused, when he needs to protect himself from the outside world.

He is in a difficult position being his father’s son, hating him so much but having to follow his path. In a way he is a prisoner to his world, the way Juliette is to hers. They don’t have much of a choice, do they, but they have so much in common.

2. The repetitions.
Juliette’s brain is quite disturbed. The world didn’t want her, so she spent so much time alone with the words floating around in her mind, obsessing and obsessing about things she couldn’t have. Now that I can see it from “above”, I can get a better picture of all that.. And yes, I admit, I might have been wrong. As disturbing as the repetition were, they were part of Juliette’s mind… I was reading her words and not the author’s.

Warner is the complete opposite. He has been in the center of attention, measuring his words, securing his thoughts, not giving away his feelings. He knows how to charm you, how to read you, how to convince you of everything he wants, because when words are not enough power can back them up quite nicely… and power is what he has plenty.

3. Adam
You know I didn’t like him that much and it made me sad the fact that the cliché seemed to happen: the good boy got the good girl. Wasn’t it such a fairytale?
Oh, you fooled me, Tahereh, yes you did!
I loved your beautiful writing in the beginning, but now I love you as an author, because if you can write such different characters with such different voices, then you deserve all the hype and then some more.

Still, taking a step back to think about it, it makes sense for Juliette to make that choice: Adam was the only one giving her freedom, not pushing her actions, but taking care of her. It was obvious that she would pick him to be her savior.
But now that she left behind a cage for another one, a side of the war for the opposite, will her claustrophobia suffocate her? Will she be the weapon both sides want her to be? Or will she want to break free?

Yes, I must confess that at this point I really hope for Juliette to choose Warner, and deep down this hope is the one making me want to read the next book. And I know that I might be wrong about all this, that I might get to be disappointed in the ending, but as long as I got to be in Warner’s mind for a just bit, as long as I got to see a different side of him, I will be happy.. Because I was right – he is the most interesting character in this story, and my love for him was not in vain.

Now, really.. I can’t wait for the next book. At the end of “Shatter Me” I was not convinced yet… I lost hope, but this tiny book gave it all back to me. I don’t trust Juliette to make the right decisions, but i trust the author to make this story glow.

PS: Just look at these stunning covers! (and they look so beautiful on my shelf)