Luis Fuentes is a good boy who doesn’t live with the angst that his big brothers, Alex and Carlos, have always lived with. Luis is smart, funny, and has big dreams of becoming an astronaut. But when he falls for the wrong girl, Luis enters a dark world he’s never known, and just when he thinks he’s got life all figured out, learns some disturbing news about his family that destroys his positive outlook on life. Will that Fuentes bad boy streak come out with a vengeance and lure Luis to live on the edge like his new girlfriend and his own father?
Continuing all the steamy romance of the first two books, New York Times and USA Today bestselling author Simone Elkeles gives fans one more satisfying taste of the irresistible Fuentes boys. 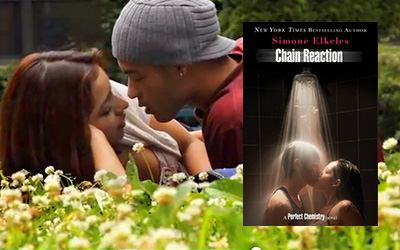 There are only so many times you can enjoy the same old story.. in my opinion it gets down to probably two.
I loved the first book because of the characters, and the chemistry and the action and I enjoyed enormously the humor in the second one, but when it comes to this one… I am terribly sorry to say that it was such a big disappointment.

Please Simone Elkeles, I know you can write better than this, I’ve seen it before, just come up with something new the next time. I just feel like I’ve seen it all and I have no interest in reviewing the same story from different angles.

One thing that I liked is the cover – yes it’s hot – but can someone please tell me where the hell did the scene from the shower go? Did I get the wrong copy or what? I was expecting it, damn it! The only shower I’ve read about is the one from the chemistry class.. and God help us all, I don’t know what’s the point of that.

Another thing I was expecting is a “bad girl vs. good boy” thingy going on.
Am I the only one realizing that there is no such thing? I know Simone had to rewrite the whole story, but I didn’t think that this was suppose to change too.

Because there is the same good rich girl, now called Nikki (the only difference from the previews books is that she is suppose to be Mexican, but she doesn’t know Spanish and for 99.9% of the time she is denying her origins – so it doesn’t really count) and the same bad boy, this time the young Fuentes brother Luis (we only have a few glimpses of his family beliefs that he is a good boy, but he is definitely not – in fact he is not a “bad boy” either, he is more like an average boy with a bad attitude or something along these lines). And he was suppose to be smart so why, I mean WHY did he do the same mistakes like his older brothers? The I-must-be-with-the-Latino-Blood-to-save-my-family crap is getting so old I want to scream, so is the fact that he must lie to his girlfriend and his brothers because they would not approve (Didn’t you wonder why?? You smatra$$ could have learned more from your brothers and saved us from this retelling, you know?)

Now the characters are the ones that really got on my nerves.
They change their mind and they switch principles like really dirty socks (ten times a day). I didn’t feel like they were the same ones through the story. It was like they had no personality at all, and they simply went with the flow changing their mind for convenience – I am mostly talking about Nikki and Luis, but it is the same with the others.

I wanted to shoot Luis and Alex at the wedding (I suppose you know about the wedding between Alex and Brit so it is not much of a spoiler – it happens right at the beginning) – it was suppose to be sweet and romantic and it ended by being really embarrassing . *hiding my face in the pillow*

Then I wanted to shoot Carlos when he said that he was single (to another girl!) just in front of Kiara!!!

Then I wanted to shoot Nikki’s parent for liking Luis a moment and being against him the next one.

Then I wanted to shoot the Chemistry teacher – why did she had to change her personality in this book? “Zero tolerance policy” mean ZERO, none!

And then I wanted to shoot the Fuentes mother – because she was totally UNDER-protective in this story.

What’s wrong with these people?

Well, I’m out of bullets, so I didn’t end up by shooting myself because of this big disappointment.

To end on a good note, I feel that I should tell you that there are also a few funny or sweet moments, and also there are some hot scenes between the main characters (but I was too annoyed to enjoy them) – so I don’t know, just read the book if you want to, and judge it by yourself.
Maybe you will love it.

Note: The Romanian version of the review can be found here.
PS: These pictures and more can be found on the author’s Facebook account.