Book #1 in Delirium Series:
Before scientists found the cure, people thought love was a good thing. They didn’t understand that once love — the deliria — blooms in your blood, there is no escaping its hold. Things are different now. Scientists are able to eradicate love, and the governments demands that all citizens receive the cure upon turning eighteen. Lena Holoway has always looked forward to the day when she’ll be cured. A life without love is a life without pain: safe, measured, predictable, and happy.
But with ninety-five days left until her treatment, Lena does the unthinkable: She falls in love. 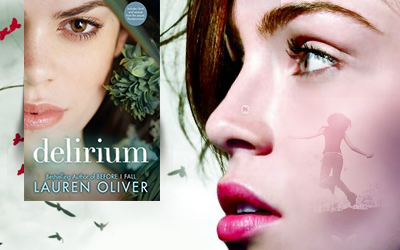 “I love you. Remember. They cannot take it.”

I wanted to like this book… I really did, but somehow I couldn’t get into it the way I wanted. The writing was really good, but I guess it wasn’t enough for me to love the story.

First, I like a book with a plausible story-line. I understand the need in YA books for some people to write about fairies, and vampires, and so on (feel free to fill in the blanks)… But a story about a world in which love is considered a disease? Hmmm…What’s the purpose of that, other than having a fake drama in the middle of the story?

Ok, I got the forbidden love part (because all books seem to go around this subject in a way or another, and most of the times it works), and I got the “government is so terrible” part, and the “we have to control people” part.. But why would the government give a damn about people falling in love? Yes, I have my answers and I guess that passion makes people care, makes people change, makes people fight.. But still, something was missing here..

So we have this world that I didn’t believe in, and we have this character Lena.. Well I wanted to like her too, and sometimes I really did, but it takes a lot of effort to be in her mind, you know. I mean, in how many ways can someone whine about something?

She told us a million times how she wanted to get done with the “cutting my brain not to feel love” intervention, she told us a million times how she remembered her mother and how she didn’t want to be like her.. But what I found really annoying was in how many pages she could just get from point A to point B. There was some fake suspense in the middle of all this because even when she needed to go for a walk she had to describe it in too many pages (!!!), as if there was something big that was happening in there.. And most of the time it DIDN’T.
When I got to the end I didn’t care about the action because I was so exhausted (and it’s sad because finally there was some action!). I didn’t even know the characters at all and most of the time I didn’t trust them. Well, this make sense since poor Lena had to pretend all the time to be different than she was, and everybody pretended to be different, so how could Lena trust them, how could I trust them? But still, I need to care about something in this book, I need to relate with someone in some way.

And now about our guy, Alex… I really liked him ( I liked him and Lena’s friend too) but why in the world would he fell in love with Lena, it’ just something I cannot understand.
In this book he was some knight in shinny armor and every single good thing in the book happened because of him, but how they both started their relationship, the silly conversations they had first, and Lena’s “I am 10 years old” act made me lose my interest in their love story. I wanted him to end up with Lena’s best friend instead, because he deserved better and she was nice and maybe she shared more of his interests than Lena… but who am I to tell them who should they love?
Back to Alex, he was sweet, and caring, the usual “too good to be true” type of character, that had some secrets of his own, and who tried to help Lena with everything he could, to make her happy. I wanted this book to be more about him, his past story, and less about Lena and her complaining.

Also I didn’t expect things to turn around the way they did in the end. Of course I want to know what happens next, but I wish that the next book would be told by Alex. Seriously, if I hear Lena’s thoughts for another 300 pages I will die, because I can bet there won’t be many positive thoughts, and definitely not at the beginning.

Anyways, it was not a bad read, in fact it is kind of good, just not my type I guess, and maybe some of you will love even the things that I didn’t.

Note: This is not the edition I read back then, but I like this cover better, and it also matches the Pandemonium cover 🙂