I never told anyone how I felt about her. Not even Evie—not in so many words. And now, I’ll never get the chance to.
When a class assignment brings quiet Chase Mitman and the stunning Evie Cunningham together, a mutual attraction ignites. There’s only one problem—Evie already has a boyfriend—one who practically OWNS Whitley Prep, and her.
Knowing their relationship comes at a price, Chase’s life collides with Evie’s, and after entrusting her with a tragic secret, the last thing he’d ever expect is to learn she keeps a few of her own.
An innocent prank turns ugly. An anonymous note changes everything. And lives at Whitley Prep will never be the same.

From YA author Jennifer Murgia (Angel Star, Lemniscate, The Bliss), comes an emotional story focusing on the social agenda of students at a preparatory high school and the impact it has on their lives. BETWEEN THESE LINES offers a haunting reminder that sometimes the person you think you know the most is the one you know the least—and sometimes, that person is yourself.
Fans of Simone Elkeles and Tammara Webber will appreciate Murgia, who understands that first love is heady and complicated and full of surprises. 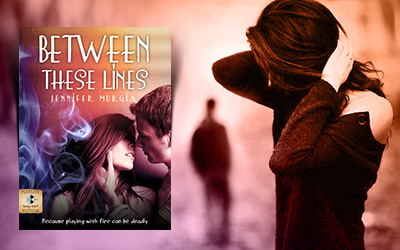 When I receive a book for review and I don’t like it, I am always a bit hesitant before writing down my thoughts for everyone to read. You see, there are books that work for many of us, books that work for some of us.. and books that simply doesn’t work for me no matter how interesting the concept might seem to be at first sight.
..This goes in the last category. *sigh*

There are a few reasons why this story didn’t work for me.

1. First because it is full of clichés:

I feel like I’ve seen it all before, but if you didn’t, then that’s a good thing because you might actually get to enjoy a bit this story.

2. Then, the story is a bit short, so there is not much development – not in terms of character development, neither plot-related. There are many things happening that should be important, but never really felt so or never got to that point; there was this suspense that didn’t make sense because we were left hanging in mid-air.

3. Also, the domestic violence was something that I didn’t like at all, not because it existed, but because it was poorly managed.
I know things like that might happen in real life: boy beats the girl and she does nothing, never leaves the relationship (even though in this case she had a reason: she didn’t even have feelings for the abuser anymore and she liked someone else; she wasn’t even tied by some good memories – as many abused girls seem to be). But I wished for this girl to make a difference, to set an example for these girls reading the book (that are young probably and don’t know better). But *sigh* she never did.

The only interesting part on my side was the ending.
I am not saying that it was done the way I wanted it (as it felt pretty rushed and I was already losing interest to make myself care much about it), but at least it made me feel something nice toward this novel. It didn’t change my perception of this story, but it felt refreshing after all the clichés.

We meet the main characters after they fall one for the other (of course they have no idea that the feeling is mutual) – so it doesn’t make much sense for them not to even try to be together, not to interact in any way, and most of all it doesn’t make sense that Evie is still in a relationship with a boy that treats her the way he does – I’m talking about someone punching his girlfriend and I would add rape to the list too – as forcing someone to have sex with you, even when you have a relationship together, is just the same.

Note: Girls should know that this is not right – this is not an example, this (I assume that) only shows things that happen, for you to understand how wrong they are and for you to make better decisions in real life.

Then, talking about Chace, his reason for being an outcast was not a very solid one.
Let me tell you something: I know that there are people out there that grew up without their parents, that went through traumatic experiences, I really hope that they are able to get a hold of the situation and really live their lives (at least in the memory of the ones that don’t have that chance anymore). They don’t deserve less in life because of what they went through, it’s quite the opposite, they deserve more happiness to balance the suffering. It should NEVER make them feel less, it should only make them stronger.
And if you are a lucky one, with a happy life,  but you know people like the above, please.. don’t you ever look down them, you are not better, you just have a easy life – that’s all. I don’t get the bullying thing, why treat others so bad? What good does that to one?

The character I liked the most was Evie’s father – he was not present, but his words were ringing in my head at all times. I am not sure though why Evie didn’t listen to his advices if she knew them so well. But even he had his flaws and I am not sure why did we start liking him only to see him make his own mistakes. *shaking head*

Talking about mixed feelings about some characters, Evie’s best friend was one of those too. She gave good advices, but even though I knew where she was headed I didn’t understand her reasons. Why do the mistakes you try to keep others from doing? And people, please stop using alcohol as an excuse for everything stupid you do. You don’t become a whole different person when you’re drunk, you just have no moral restrictions so you do what you please without second thoughts – and you should really question yourself if you are the kind of person that acts entirely differently when drunk.. just saying.

But maybe this is a good thing, that no character is perfect, that making mistakes it’s in our nature (of course, only if we learn from them). Still,  you need to know when to help yourself, when to make better judgements, when to move on.
The lines between good and bad, between good choices and bad ones are not so easy to be seen, but we have to struggle and find those ways that make us happy, that are good for us and focus on them.

I really wanted to like this story, I really wanted to care more for the characters and be more emotionally invested in what happened to them through the story, but for various reasons this never happened. Maybe because I read similar books before and I felt that there was nothing new to it, maybe because I prefer better developed characters, flawed but also stronger, more complex. Maybe because there was little action until the ending and by then I felt somehow exhausted, skimming through it more than reading.

Anyways… I always feel bad when I don’t like a story, because books are supposed to make me feel good, or a better person, or to teach me something.. or at least to entertain me (and make me think “how silly am I for reading this?”).