In the beginning, there’s a boy standing in the trees..
Clara Gardner has recently learned that she’s part angel. Having angel blood run through her veins not only makes her smarter, stronger, and faster than humans (a word, she realizes, that no longer applies to her), but it means she has a purpose, something she was put on this earth to do. Figuring out what that is, though, isn’t easy.
Her visions of a raging forest fire and an alluring stranger lead her to a new school in a new town. When she meets Christian, who turns out to be the boy of her dreams (literally), everything seems to fall into place—and out of place at the same time. Because there’s another guy, Tucker, who appeals to Clara’s less angelic side.
As Clara tries to find her way in a world she no longer understands, she encounters unseen dangers and choices she never thought she’d have to make—between honesty and deceit, love and duty, good and evil. When the fire from her vision finally ignites, will Clara be ready to face her destiny?
Unearthly is a moving tale of love and fate, and the struggle between following the rules and following your heart. 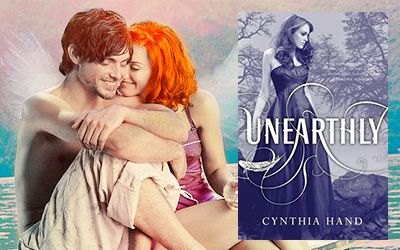 This is a great book and I really enjoyed it. Clara has a beautiful voice and a strong personality, and I loved to see her change through the story – from the moment she found out about her identity, until the last page when she was as confused as I was about her life and purpose, waiting to see what’s coming next … And so I am, because I just can’t wait for the next book in this series.

Now, I usually have some things bugging me about the paranormal stories:

Why in the world is it supposed to be like this I don’t understand, but in ALL these stories we have the main character obsessing about some guy/girl. They keep saying that they are in love but from my point of view is just some strange obsession because they don’t even really know each other to be honest. Love involves more things than just good looks and great smiles and electrifying touches, you know. Where do you let the trust, and friendship, and being there one for another, and having things in common or completing each other perfectly. You see, there is more to love than meets the eyes and I like it when the authors develop the love part of the story in a better way.

“I won’t be that girl who lets the guy treat her like crap and still fawns all over him.”

Oh, I must confess that in some books I found this a bit sweet for a moment or two, but generally this is kind of embarrassing no matter how we look at it. And what annoys me most is the reaction of the characters. Let me tell you something, if I saw someone showing me how deadly strong or shiny or whatever he is I would definitely not fall more in love with that person (probably less … and scared at least). I don’t say that I would definitely run away (even though this might cross my mind) but I wouldn’t declare my undying love to a person that might easily kill me just because I think I am in love (but here we go again – these characters are obsessed one with the other so it might feel normal to them to act as they do – who am I to say that they are wrong, huh?)

If you have a secret that it’s way beyond you, and you parents tell you every 5 minutes not to say a single word to a human about that secret EVER, you don’t tell it to the first boy you find on your way!!! … It’s not even your secret to tell anyways – if for thousands and thousands of years the people like you kept that secret, maybe you should at least think again about it and simply shut your mouth. Arh! I could punch these kids for being so silly and so willing to confess something just because they can’t handle their hormones.

“Why would you tell me now if it’s against the rules?” [Tucker] “Because I love you.” [Clara]

Coming back to “Unearthly”

I must say that I had some nice surprises to enjoy.. we have some of the above in a way or another, but some things are different – and those changes made me happy.

This is a two-in-one kind of story – “paranormal meeting real life” or something. We have some elements from the paranormal stories and we have some more realistic elements too. The result, a great reading that made me smile a lot.

I like Clara and the way this story was told and after starting reading this book I just couldn’t put it down and the more I got into the story the more attached I felt to the characters and what happened with them.

There are these few friends Carla has and I really liked (Angela is one of them and can’t wait to see her in the sequel), and there is Carla’s mother who was so concerned about Carla and her brother and did everything to keep them safe even if they didn’t like it (and I can’t wait to find out more about her purpose and her history – was Sam the ‘Christian’ in her life?).

There was Christian and his story – when it came to him it really was a bit confusing because Carla was kind of naive sometimes and she couldn’t think strait about him, but his story is as interesting as hers. I was annoyed as hell about her obsession with him (that’s way I gave this book ★★★★☆ and not more), but after all it was not his fault so I can’t even blame him for it, and now I really want to know what happens next because he is just a little piece from a huge puzzle in this story. While reading I had like a million scenarios in my mind about the visions and some were close enough to the truth and at the end of the story I only got to care more about him and to ask myself more questions.

And there was Tucker – I knew he was up to something good, and I was satisfied with him in the story. For once I had a nice love story developing in the right way (even with some awkward moments), with a smart character that could react somehow in a more realistic way… and I was glad to see that he was more than a good-looking guy, and I liked all the moments with him from the very beginning (he was so sweet and funny – I found myself laughing so many times about something that he said/did), and he really worked his way to Clara’s heart so he gets more point from me.

“I think he seriously believes that deflowering and angel could mean an eternity in fiery hell.”

Now, if you want to know more about angels, or ‘good vs. bad’ battles, or some angel theories and other interesting things – you just have to grab this book and read it 🙂

All in one I really liked this book – I still don’t understand how the wings are attached to your body (because they didn’t seem to rip your clothes or something while appearing and disappearing), and I still have a million of questions about some characters (almost all of them) and btw I don’t get why on earth God would be interested in love stories anyways (even though I have some ideas crossing my mind), but I was so glad to see the turnarounds in the story and I can’t wait to read the next installment and see the real purpose of the angels, the new adventures of the characters and to find all the answers I didn’t get so far.

“I feel like Cinderella sitting in the middle of the road with a pumpkin and a couple of mice, while Prince Charming charges off to rescue some other chick.”