Each night at precisely 4:33 am, while sixteen-year-old London Lane is asleep, her memory of that day is erased. In the morning, all she can “remember” are events from her future. London is used to relying on reminder notes and a trusted friend to get through the day, but things get complicated when a new boy at school enters the picture. Luke Henry is not someone you’d easily forget, yet try as she might, London can’t find him in her memories of things to come.
When London starts experiencing disturbing flashbacks, or flash-forwards, as the case may be, she realizes it’s time to learn about the past she keeps forgetting-before it destroys her future. 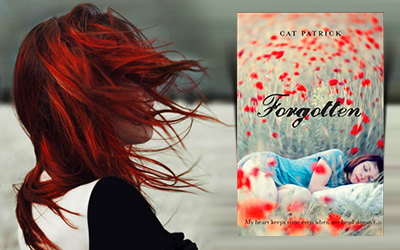 I am not sure about my feelings for this book, so this doesn’t really count as a review.

The concept was great – having memories from the future is something I thought about at some point in my life. Add to this the fact that London can’t remember her past (that her day ends precisely at 4:33 am taking away all her memories) and that she needs to keep notes about what happens (or to rely on her ‘future memories’ to know where she stands) and you get a pretty awesome settling.

Another thing that I liked was the mystery around the funeral – it kept me thinking about whose life might end so soon and I was relieved everytime London took someone down from the list.
Also all the first times she met Luke were cute – I wish there was more to it tough, like some kind of hot and cold relationship, where she likes him ‘at first sight’ one day and she doesn’t the next one (maybe I’ve seen too many movies *cough* 50 First Dates *cough*).

Still the relationship between characters and the action (in fact the lack of it) didn’t make me care too much about the story and that’s a shame, because I wanted to love this story just as much other people did.
Let’s take a look at the things that bugged me a bit:

First, at some point I just wanted London to tell her mother what she knew and get over with it. Plus, the resolution was too quick and made me feel like I lost too much time running in circles to get to the initial point (obviously the fact that she should have talked with her mother, duh!).

Also, I am still not sure why she couldn’t see the boy in her “memories” until near the ending (I would have preferred her not to ‘remember’ him at all), and I am not sure why it took her so long to figure things out – I mean, why in the world wouldn’t she write down the notes she needed? It was like she wanted to remain clueless, she just made her life harder on purpose.

Then, there is this thing that I didn’t like – the moment when she had the guts to be annoyed when someone kept a secret from her – when she did that all her life (yep.. unnecessary dramas are so not my thing). But the guy was cute, and there were some moments I did enjoy a lot.

Other than this, the friendship was a bit forced (or again the lack of it). Sometimes she didn’t care about her best friends because she knew they were supposed to be friends in the future too, other times she was sticking her nose in other people’s business and so she became a bit annoying. But hey, this is a book for teens and teens are ‘flexible’ like that.

Anyways, I got to finish it without headaches and these days this is becoming (kind of) my standard for liking a book, LOL, but on the other hand it felt a bit juvenile on some aspects. It was still  an entertaining read and it got lots of high ratings, so if you feel like reading it you should give it a try. I hope you’ll like it better 😉