Calling Anna and Bennett’s romance long distance is an understatement: she’s from 1995 Chicago and he’s a time traveler from 2012 San Francisco. The two of them never should have met, but they did. They fell in love, even though they knew they shouldn’t. And they found a way to stay together, against all odds.
It’s not a perfect arrangement, though, with Bennett unable to stay in the past for more than brief visits, skipping out on big chunks of his present in order to be with Anna in hers. They each are confident that they’ll find a way to make things work…until Bennett witnesses a single event he never should have seen (and certainly never expected to). Will the decisions he makes from that point on cement a future he doesn’t want?
Told from Bennett’s point of view, Time After Time will satisfy readers looking for a fresh, exciting, and beautifully-written love story, both those who are eager to find out what’s next for Time Between Us’s Anna and Bennett and those discovering their story for the first time. 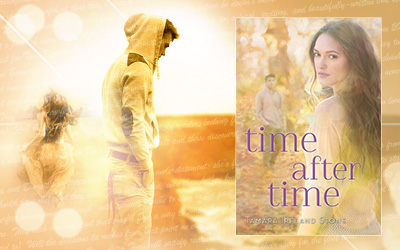 So this is how heroes are born… From the need to do something good with their abilities, from the pressure that comes from seeing what sorts of bad things happen to the people around them, from the need to rewrite a story that does not end happily…

We met Bennett in Time Between Us. He was full of insecurities back then, having life throw him into a past he wanted so badly to be his present.

Now we get to know him better. To understand him a lot more.
Now we learn about all the questions that doesn’t let him sleep at night. It is not only the fact that he knows that being with Anna defies all rules in this world, but he is starting to want to change other people’s lives too. He wants to save the innocent, to protect them; he wants to do something good with his powers.

The pressure that comes from his father and Anna herself don’t go unnoticed either. Even though they care for him and understand why Bennett wouldn’t want to alter some events, they keep pushing in a way or another – and like I said before, it doesn’t matter if you do a good thing or a bad one.. There are still consequences. The question is.. Will you be able to live with them?

I liked that we got to see Bennett in his time too. I didn’t like how he was portrayed in the first book like a solitary guy that doesn’t interact much with anyone. Yes, he had to do that because he wanted to respect his rule of not changing too much of the past, but I wanted him to feel more real somehow. And I got exactly that in this book.

Bennett struggles to have a relationship with Anna, but also to live in the present. He doesn’t know how to explain to his parents or his friends about Anna and his love for her, so he is trapped between all these lies that threaten to catch up with him. And talking about threats, also time itself doesn’t seem to want him wandering as freely as he does.

If you remember well, I talked in the previews review about how I enjoyed seeing the way the relationships between characters could alter based on the changes Bennett would make and the decisions they would take at some point.
Once more we face this fact and we get to understand his frustrations when he wants to change something for the good and it turns for the bad.

I deeply cared for Bennett. Watching him and Anna make plans and promises only to have them all broken (no matter how much he wanted to keep them) was heartwarming.
We got to see the ups and downs of his relationship with Anna and also with his friends, we watched him interact with his grandmother, we witnessed the craziness of his family – because they all seemed to be so complicated and communication seemed to lack so very much. But most of all, we witnessed his struggle and his frustration when the whole world seemed to turn against him, but still taking pleasure in the sweet moments between him and Anna, when they believed with all their heart that they could and would make it in this fight against time.

I know, this is more talk about Bennett than the story itself, but he is the main focus here. All the phases he goes through, all his trying to make things right, all his questions about what’s right or wrong.. it’s all about him and his decisions.

Time after time again, his path will always lead him in the same place, the one where he would want to stay forever, the one that is not his after all. Or.. is it?

4 responses to “Time After Time”