Lola and the boy next door

Budding designer Lola Nolan doesn’t believe in fashion . . . she believes in costume. The more expressive the outfit — more sparkly, more fun, more wild — the better. But even though Lola’s style is outrageous, she’s a devoted daughter and friend with some big plans for the future. And everything is pretty perfect (right down to her hot rocker boyfriend) until the dreaded Bell twins, Calliope and Cricket, return to the neighborhood.
When Cricket — a gifted inventor — steps out from his twin sister’s shadow and back into Lola’s life, she must finally reconcile a lifetime of feelings for the boy next door. 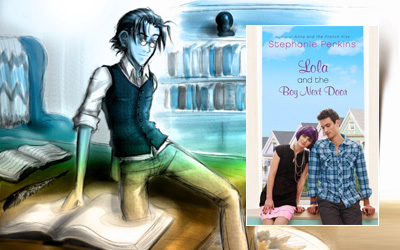 Oh, that awkward moment when everybody loves a book and you don’t understand why…

You know that feeling, right? Well, yeah, I’m pretty much living it. I thought I would love it to pieces, too bad it didn’t work that way 😐

It’s not that I DIDN’T LIKE the book, it’s just that I didn’t LIKE it.. Does it make any sense to you, because for me there is a whole damn big difference.

Anyways, this is not Anna’s book-sister, this is more like the evil stepsister.. It  actually managed to  raise my blood pressure, unfortunately not in a “too hot to handle” kind of way.

I’ve generously given this book 2.5 stars because I love Stephanie’s style. Not only because I loved Anna but because I follow Stephanie’s  blog and I love her posts, her wittiness, her optimism, her joy of life. She makes me laugh a lot.. But Lola, Lola was just not right for me and I really struggled to understand why did all those people love it so much.

First I didn’t like (whinny) Lola.. Or (dorky) Cricket for a matter of fact. (Yes, I know you all love him but I just can’t understand why)
Then I liked Max.
Did you just have a heart attack? No? Ok then, Because i need you to listen to me.

I’ll start from the beginning…

I didn’t care about her, her wigs, her pink and glittering room, her past with the twins, and her memories from when she was 5 years old.
I found her to be really immature, and she was complaining way too much.
She kept denying her feelings for 3/4 of the book and when her best friend (Lindsey) said that it was obvious that she liked Cricket then *bang* the truth hit her.

“I open my window and a thousand bottled emotions explode inside of me at the full sight of him.
I like Cricket. Like that. Again.”

No s**t.. after 200 pages of whining about how he hurt you, and how you don’t want to like him, and how you like him but you want to be with your boyfriend (to whom you lie all the time BTW). The realization just hit you one moment… just like that?
And I had to hear you all that time complaining and complaining, and playing with Cricket’s feelings just.. because…?!

Let me tell you this:
In “Anna” there was this cute flirting between the main characters and some nice friendship going on.. I understood why Anna liked Etienne, even as confusing as the situation was.
In this one I felt sorry for Cricket. He was begging for love from the moment he confessed that he liked her (only a few days after he came back). He was always there for her, like a faithful dog, it broke my heart, really! Just take a look at him: 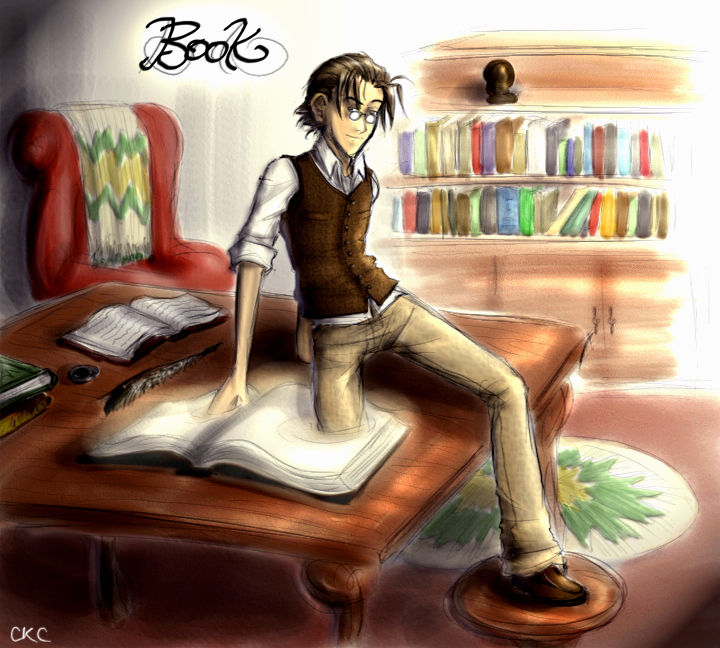 Talking about Cricket.. He’s been described by other reviewers as this sexy geek, swoon worthy that would steal everyone’s heart. (no really?!)
Did I read the same book?

Except for his tight pants (yes, apparently he had sexy pants for all I know from Lola’s obsessive thinking) there was nothing sexy about him (of course, in my opinion). All Lola’s memories of him are awkward and he is described as something totally different and unattractive, and I had a hard time understanding why did she like him in the first place.
Because he was the only kid in the world not saying bad things to her? Because he was the boy next door and it’s nice to have a crush on your neighbor? I don’t know why!

And then he was mostly absent from this book, coming home only for weekends (not even all of them). Yes she thought about him all the time, from the very beginning, because she was obsessing about him. She said she was unhappy because he came back, but right before that she was whining about losing him. Even in the beginning. She couldn’t say something about her boyfriend without remembering the boy next door.

But it’s all his fault.. She had the nerve to say that it was his fault that she was thinking about him.. yeah, blame it all on his return..
Do I need to quote her on the first page talking about him when he was not even back yet? No?
OK, then I rest my case.

Her family was weird.. I couldn’t understand why they were so involved in her life, not agreeing with anything.
All she did was wrong, no matter what.
You like Max? Wrong!
You like Cricket? Wrong! (if he comes to your room)
Are you too happy.. Are you sad? Wrong, wrong, wrong!

I hated the protective fathers… As Max said: one is horrible, 2 unbearable.. I agree!
What was that obsession about the age difference?
There is something called trust, you know, and you should trust your kids (because if they want to have sex with someone they will do it even with someone their age, there’s no need to find someone 5 years older.. Just saying).
Still, I liked Alec. He was the ‘good father’.  I liked the advices that he gave Lola., how he was there for her, and also I liked that he told her when she was doing something wrong. In a nice way. He was not as absurd as Nathan.
As for her mother, she was a mess.
With a family like that I don’t wonder why is Lola so vulnerable and unsecure and undecided.

Lindsey was a crappy friend, and there was no trust between them either.
In Anna I loved the friendship between all those characters, in this one it felt simply unnecessary… Lindsey was there just to crack a joke from time to time, and to boss around telling Lola if she was allowed to like Cricket or not (and to complain about Lola’s boyfriend.. what a horrible thing to do – no wonder why Max didn’t like her either).  And they were so different that I wondered why in the world were they friends anyways..

Anna and Etienne were there, but not even they made a good appearance. They were not close friends to Lola, and their relationship with her seemed a bit forced. I hated when Lola let down Anna when she promised to introduce Anna to her boyfriend (Max).

Max was the only character in the book that I liked, but I wasn’t suppose too, and he turned out conveniently mean in the end, just to make a point: he was older, he was no good for her, he was not to be trusted, he had to become a jerk, he had to break Lola’s heart. DONE! (BTW, when you break up with someone because you like someone else, are you allowed to tell that he broke your heart? I didn’t think so!)

Anyways I felt sorry for him, because I knew that Lola never really liked him, and she was with him only because he was older and she wanted just to show off in front of her friends and to piss off her parents.
But he was nice, and smart, and he tried a lot to make thing right. He was the only sane character in the book! I was sorry to see him change (personality wise) at the end only to make the situation easier for Lola. What a shame!

All through this book I kept thinking: how in the world would I understand Lola, if she went against everything I believe in?
How could I enjoy her complaining about losing a guy I couldn’t care less about (because she made me hate him in the first place), how could I be there for her while lying to her boyfriend (that I actually liked), and so on.

I understood Etienne in the first book, the story worked in his case… His dad was a big jerk and his mother was dying, and he needed to have something permanent in his life, something to be somehow certain about.. That’s why he didn’t break up with Ellie, but what is Lola’s excuse? Cricket told her what he felt almost in the beginning, and she was toying with his feelings. Remember how some people said that Etienne was playing with Anna’s feelings? Well, meet Lola, she is even worse.

There were so few funny moments, yes, but other than those this book was mostly depressing, with Lola complaining about her love life, and her mother, and Max, and her fathers, and the twins. (oh boy, not the twins again!)

I still want to read the next book, I can’t wait for it, but “Lola and the boy next door” was simply not a book for me.
When I read about Christmas in this one, I remembered the Christmas scene from the other one, with the phone calls and messages, oh, it was so damn cute.
Even if I didn’t like this book as much as I wanted, I can give it credit for making me want to read “Anna and the french kiss” again, and for making me hope that “Isla and the Happily Ever After” will be better.

”Because that’s the thing about depression. When I feel it deeply, I don’t want to let it go. It becomes a comfort. I want to cloak myself under its heavy weight and breathe it into my lungs. I want to nurture it, grow it, cultivate it. It’s mine. I want to check out with it, drift asleep wrapped in its arms…” 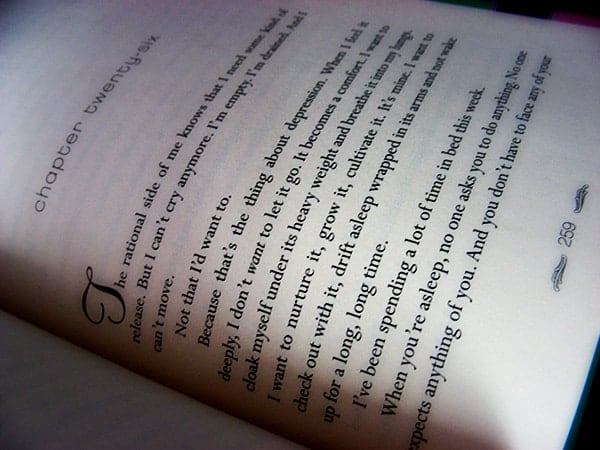 Plain White T’s – Hate (I Really Don’t Like You)

Read the review for the book companion: Anna and the French Kiss

PS: sorry, Jo, that I didn’t love this book as you did. I’m glad that you liked it better! 🙂

19 responses to “Lola and the boy next door”