After an unexpected transfer to the States for her senior year, Suranne’s new friends give her just one instruction: stay away from Kane Richards. According to everyone, he’s a heartless playboy concerned only for himself. With one glance, it’s easy to see why he gets away with it. But things aren’t always what they seem- especially when he sets his sights on her and whispers that she’s different. Despite all the red flags, Suranne considers whether or not his intentions are genuine or if she’s simply another name on his list. In the process, she may just uncover the real Kane Richards. But, when it comes down to it, the real Kane Richards may not want to be found. Filled with raw emotion, Kane Richards Must Die explores relationships, trust, love, and what can happen when life takes an unexpected turn. 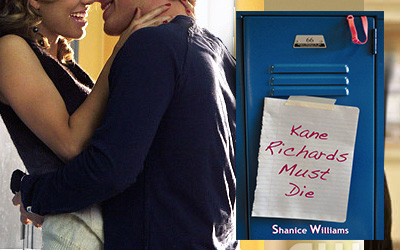 I usually don’t write reviews when I don’t really like the books. I think that the author made a great effort to write a book and I would be somehow mean to her/him by saying bad things about her/his work.

But for the same reasons I wanted to read the book some others might as well, and i wouldn’t want them to be as disappointed as I am now..
So, here’s my piece of advice: Read it if you think that this book is your type, but not because other people compared it with some books you liked in the past.

Now, about the book:

I wanted so badly to read it because i’ve seen many comparisons with Perfect Chemistry and The DUFF (2 books that i got to love) and because the premise was sort of intriguing (I love to read love stories and I love the bad-boy-turned-to-good scenario even if it is getting kind of old).. you can see clearly my disappointment about this one.

The characters are two one-dimensional (I never really got the idea of 2-vs-3-dimensional characters into the other people’s reviews, but i can see it now so clearly). There is almost nothing you can say about them.. They felt as flat as the printing paper.

The girl: she was stupid, misunderstanding everything, having no personality at all (not much pride either), falling in love with someone just because of his good looks (come on, this is really getting old) – or maybe because the others told her to stay away from him. She barely saw him in the distance and she knew why girls love him so much – yeah.. it is because of his personality of course.. NOT! (not to mention that he treats her like hell even when they are a couple, but she loves him so she can’t be mad at him) (view spoiler) and the moment they finally break up, is not because he is drunk and treat her like shit, it is ONLY because he doesn’t say “i love you too” when he comes back to apologize for what he did and couldn’t really remember

The guy: Ok, this is complicated.. He was supposed to be perfect, and he was perfectly wrong in every single way.

I understood the bad-boy act in Perfect Chemistry mostly because of the gang thing (in fact I had a good friend playing the bad-boy role just because he had a reputation to maintain, even though he was a sweetheart when you knew him better – no gang included).
Also I kind of understood the man-whore in The DUFF because I could see in a way why girls fell in love with him – he was smart, described as being really-good-looking, and charming.. i could see it in the book, in the conversations – at least he treated the girls he wanted to sleep with in a good way (or so I remember, maybe I need to read that book again).
I should also mention that in both books the chemistry was amazing, the intimate moments tastefully described, and the stories kind of sweet. Those books kept you wanting to read more, the characters were smart and funny even with there flaws, you could enjoy reading their story – and if you didn’t, I can’t really imagine why would you enjoy this (or enjoy it more)

He treated girls horribly.. not only the ones he didn’t like, or the ones he wanted to sleep with but had no further interest in them, but also the girlfriend(s). He was mean with no reason, annoying, always complaining, always doing the wrong thing, and I couldn’t care less about the reason he acted like a jerk (view spoiler) his father being dead had nothing to do with it.. and his ex-girlfriend left him only because he was the PREFECT JERK and he deserved it like hell  This being said I wouldn’t like this guy not even if we were the last to people in the world or our life would depend on it.

At the beginning I thought that maybe I will find something good about him in his POV, but I got so mad at him for being such an egocentric, selfish, perfect jerk that I wanted to punch him so badly.. I don’t remember the last time I hated one of the main characters this much.. I understand the title of the book.. really!

And what about the ‘I don’t kiss girls on the lips’ thing? That was king of weird, and had no purpose other than making the girl special because he kissed her and only her (how lame is that?)

The story:
I had a hard time getting over the first part when everyone kept telling her to stay away from him – it was not realistic at all (imagine that you just talk to someone for the first time, is this the only thing you could tell her: to stay away from X???). And who did it? The man-whore’s best friend and Kate (view spoiler) his ex.. like the only ex.. you got it, right?… you didn’t?.. well, i’ll tell you: the one that made him not want to have a girlfriend anymore .
I must tell you that I never felt bad for Lawrence (I hope I got his name right) because he liked our girl but never said a damn thing to her. He felt miserable but didn’t even try, not for one moment, not even in the beginning – he also knew that she was going to love our guy, so he never made an attempt to win her heart. My best guess, he had a very low self esteem.

The rest of the story didn’t impress me much – I didn’t feel the connection between the main characters, I didn’t understand why they did fell in love with each other, the reasons for why they broke-up where kind of silly and the resolutions where not so different.
So I had almost no feelings at all (do annoyance count?) – I didn’t feel happy for them, I wasn’t sad either.. yes I was rolling my eyes from time to time and I skipped some pages near the ending, but being bored is not what I was looking for while reading this book.

PS: don’t even bother asking if this book is somehow similar to the movie “John Tucker Must Die” .. there is NO relation between them – not that it is a bad thing (but at least the movie was funny.. really silly, but also kind funny)