Jeane Smith is seventeen and has turned her self-styled dorkiness into an art form, a lifestyle choice and a profitable website and consultancy business. She writes a style column for a Japanese teen magazine and came number seven in The Guardian’s 30 People Under 30 Who Are Changing The World. And yet, in spite of the accolades, hundreds of Internet friendships and a cool boyfriend, she feels inexplicably lonely, a situation made infinitely worse when Michael Lee, the most mass-market, popular and predictably all-rounded boy at school tells Jeane of his suspicion that Jeane’s boyfriend is secretly seeing his girlfriend. Michael and Jeane have NOTHING in common – she is cool and individual; he is the golden boy in an Abercrombie & Fitch T-shirt. So why can’t she stop talking to him? 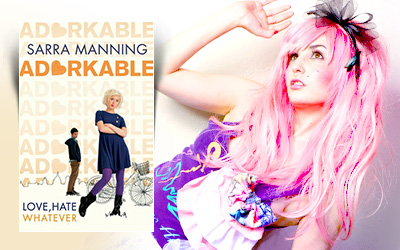 This book was such a (lovely) mess!

At first I had a hard time following where the story was headed. But somehow I got to love all the dorkiness, the craziness, the dizziness that the characters made me feel when they changed their mind every half-page. It was cute, it was refreshing, it was somehow original and near the ending it gave a few lessons that are worth knowing – some about ourselves, some about the world we are living in.

“Be yourself, everyone else is taken” – No, this is not a quote from the actual book, but it could have been.. Because this is what this story is about.
It screams to you to be yourself, to be who you wanna be, to act the way you want to and to say what you are thinking without being afraid.. Because you are special, with the good and the bad, and everything in between.

I know how hard it is to “be yourself” when you are a teenager in search for the damn inner self, mostly because you really have no freaking idea of who you really are. But you should have your own opinion, your own style, you should make your own decisions, and no matter how different you are you shouldn’t be ashamed.. because life is too short to live in someone else’s shadow, and you should make the best of it right here, right now.

“Generation Y. Shallow. Narcissistic. Self-involved. To paraphrase Oscar Wilde, Gen Y knows the cost of everything and the value of nothing.”

There are many things happening in this book, some good, some not so much.
I wanted to kick both Jeane and Michael for arguing so damn much, for misinterpreting everything, for hurting each other’s feelings, for being mean when it wasn’t needed, for not realizing what they felt until it was a bit late, for getting carried away by fear, and embarrassment, and anger, and for not being able to just be themselves and do what they wanted to do without caring about the others.

They were not opposites; they were just simply different and incompatible. I liked that we didn’t have the good girl/ bad boy thing going on. They simply didn’t match until, well, they finally did.. Not that they changed or anything, they just realized that the good things are bigger and more important than the bad ones. It is called compromise, and you will find more about it in your own love life over the time.

All this talk about being yourself, still Jeane was doing in fact the very opposite, but not in the way you might think – she was doing what others thought was wrong, because she couldn’t agree with the masses.
Sometimes this meant that she had her own personality, sometimes it just meant that she wanted to be different… No matter if she was wrong, if she was mean, if she was hurting people or pushing them away.

Also, she had this obsession for social media. She couldn’t probably go to the bathroom without updating her status, sometimes it was really fun, sometimes she got them in trouble and some other times I wondered when did she have the time to update her website and to post all those updates.

Michael
His struggle was palpable as he tried to figure out his feelings for Jeane.
I think I understood him – it must be hard to like someone because of the personality, but not like the appearance and be ashamed to be seen with that person, even though you enjoy the company. Sounds complicated, right? Well it is.
He was happy with her even though they kept fighting all the time, but also he was embarrassed by her dorkiness. His inner fight made me smile and it was cute to see him change his mind all the time, thinking one thing, doing the another one.

“No one but Jeane Smith could make me feel like I wasn’t that big of a deal. Even if I rescued small children and puppies and kittens from a burning building with no thought for my own safety, Jeane still wouldn’t be impressed.”

As I said before, these two were really different: not in an opposite-can-attract kind of different, but the “we-don’t-have-a-damn-thing-in-common” type.
They weren’t the “bad-boy and good-girl that oh my, can’t be together”, they were just two incompatible people that step by step found out that they can love each other against all odds.
What I liked about them was the fact that up until the ending, they were still different, they didn’t have to really change to make the story go.. They didn’t have a hidden depth attached to them, they were transparent with the good and the bad and they learned how to love each other.

The parents: I don’t know where are the parents these days, because in YA books they are simply.. NOT.

Other Kids: What can I say, they are mean!
I don’t know why teenagers tend to be such brats sometimes (and don’t tell me that this is only fiction because kids are mean – not matter how old they are), why they don’t like people being different, why they have to give the others a hard time just for the fun of it..
If I think about it.. You know how I told you to be yourself?
I am full of contradiction tonight because, scratch that.. if being yourself is being mean, than you deserve to live in every shadow you can find, because the world might be a better place if we at least pretend to be nice! Now I’ve said it!

Anyways, I liked the story. It was messy and crazy and it got to my heart slowly, as slowly as the characters fell in love. I like being surprised, and I like spending time with a book that makes me smile. This one did it and I thank it for that.

Now think about it…

I still need to find the girl that is totally comfortable in her skin, that thinks about herself that she is perfect.
Sometimes the problem is with the eyes that are too big, or the breasts that are too small, or the nose that is too sharp. Maybe the girl’s too skinny or too bulky, maybe she’s a nerdy smart-ass, or just a silly girl that says all the wrong things. Maybe she doesn’t like her body or her face… maybe she just doesn’t know how too look at herself in the mirror and see the beauty in there. Because we are unique, we are beautiful – we just need the right eyes to really see us.

I’m small, I’m shy at times, I’m stressed and stressful, I give up easily, I’m afraid of everything, I’m average looking with no shapes at all and I dress with kids clothes ‘cus those are the only ones that fit me.. Oh, and my messy hair seems to have a personality of his own and it totally fights against me.

But this is not me at all, because most people don’t even notice these things and underneath all that, there’s another me.
I am also caring, I love to help people to enjoy the time spent with them.  I am beautiful when I smile and when I smile I mean it. I’m creative and fun and I love music, dance and photography (I am not even bothering to talk about my love for books now).. I like to learn new things, I am passionate about what I do and I love the company of my friends and family.
Trying to hide a part of me, means that I might also erase some other good parts in the process, so why would I do that?
Why shouldn’t I enjoy the real me, the whole me, the adorkable me?

And if you are one of those kids from above that would like another side of me, why should I change for you?
And btw, who are you? What’s your adorkable side?