What happens when you discover you aren’t who you thought you were? And that the person you love is the person who will betray you? If your fate is already determined, can you fight it?
When Evie Tremain discovers that she’s the last in a long line of Demon slayers and that she’s being hunted by an elite band of assassins –Shapeshifters, Vampires and Mixen demons amongst them – she knows she can’t run. They’ll find her wherever she goes. Instead she must learn to stand and fight.
But when the half-human, half-Shadow Warrior Lucas Gray – is sent to spy on Evie and then ordered to kill her before she can fulfil a dangerous prophecy, their fates become inextricably linked. The war that has raged for one thousand years between humans and demons is about to reach a devastating and inevitable conclusion. Either one or both of them will die before this war ends.
If your life becomes bound to another’s, what will it take to sever it? 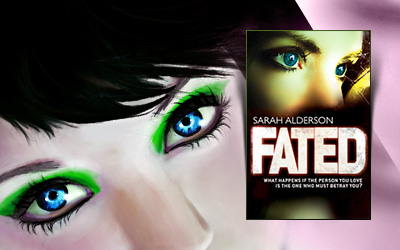 I wanted to love this book, I really did.
You know how I liked ‘Hunting Lila’ and you might know that I like a lot Alderson’s style – so don’t get me wrong, the characters are enjoyable and there is a lot of humor in this story, but for some reason it was just not enough.

At the beginning I thought this story would be perfect for me.
I liked Evie (what a nice name!). She was smart, sassy and she didn’t let anyone walk all over her.
She was scared at first, finding about the other worlds around the one she knew, but still she managed to keep it together. I loved how she reacted at finding about all those creatures and how she didn’t want to be part of this madness, how she wanted to return to her normal life where monsters were not real and she wasn’t supposed to hunt them down.
The last couple of years were very difficult for her and she’s lost almost all the people she loved, still her optimism was contagious.

“Oh great.” Evie threw her hands up in the air. “I’m an untrained demon hunter with only crap half-powers, suddenly expected to go all Buffy and save the world”

So now you might want to ask me “what was the problem then”?
Well… the male character, Lucas (as a side note I like this name a lot too) and the love story.

If the action was pretty good and the characters intriguing and surprising (more or less), I can’t say the same thing about the romantic side of it.

The big problem is that I don’t like insta-love, not at all, not in a million years and definitely not in this book. I don’t like how destiny makes it all so easy – one moment Evie wants to break his head (in fact punch him in the face.. with a baseball bat) and he wants to kill her (searching for revenge), the other moment all she does is think about him and he declares that he loves her (if you can love someone after only a few days in which you barely talk) – as the title says, it’s all about fate, they are meant to be together and I just have to deal with it. *sigh*

“I’m not sure I fully understand it myself but I know that I love you and that something is pulling me towards you. Fate, destiny, whatever you want to call it”

From here it’s all about training, revelations and a bit of betrayal. Some actions don’t make much sense, some characters are switching sides without consequences, some things are not explained very well, but overall this is an enjoyable book.

Another problem was the evil guy.
Yes, that was a great twist into the story, but no, it didn’t work for me. It seemed forced  (and they could have been done with it once and for all), so I was a bit disappointed by their decision at the ending.

If you ask me if I’ll read the next book in the series (supposing there will be another one), I think that I probably will. After getting done with the falling-in-love-in-an-instant thingy, I can see this story getting better.