Why be the sheep, when you can be the wolf?
Seventeen-year-old Ismae escapes from the brutality of an arranged marriage into the sanctuary of the convent of St. Mortain, where the sisters still serve the gods of old. Here she learns that the god of Death Himself has blessed her with dangerous gifts—and a violent destiny. If she chooses to stay at the convent, she will be trained as an assassin and serve as a handmaiden to Death. To claim her new life, she must destroy the lives of others.
Ismae’s most important assignment takes her straight into the high court of Brittany—where she finds herself woefully under prepared—not only for the deadly games of intrigue and treason, but for the impossible choices she must make. For how can she deliver Death’s vengeance upon a target who, against her will, has stolen her heart? 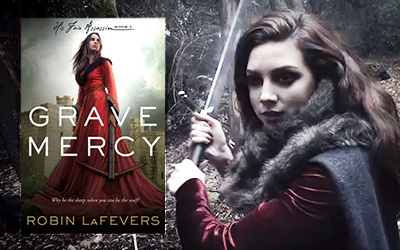 How many ways to kill a man do you know?
Probably many, right?
Now, how many of them could you use if in trouble?
For me the answer is around.. arr.. none, if you don’t count the fact that I could bore someone to death, but that would take me quite a while. This being said I would be in big, big trouble.

So, let’s pretend that we need to know how to save ourselves. We are all damsels in distress and we have to change this and fast because our life depends on it.

Who could teach us how to fight?

I have some choices ready right here:

These options are great, but they are obvious and not at all original.
And the problem is that I didn’t search for a killer in the best hiding place of them all.. in a convent. Yes, you’ve heard me right. Nuns are the new kick ass heroines that could kill in a heartbeat with their bare hands, and they are ready to teach you a move or two if you sell your soul to Death and swear to always listen to his command.

And so this story begins. This one was such a great adventure!

Ismae’s life has never been easy. All men in her life had shown her no mercy, so when she gets the chance for payback she takes it without second thoughts.
After 3 years of training in a convent (where she learns many ways to kill men using hidden weapons or poison) she is ready to confront the world of men and to kill all the people marked by Death.

I think that what I liked the most was the fact that under the assassin cover she was still human, and she cared. She was supposed to be this cold ‘weapon’ that only had to obey orders, but she had a heart too, and she wasn’t afraid to use it.

When she was sent to keep the douches safe (and to kill the people that had betrayed her) she started for the first time to grow feelings for the man she had to keep an eye on, and her life got more complicated with every order she received, and every discovery she kept for herself.

People say that she was too soft around Duval, melting under his eyes, his touch; but the truth is that deep in her heart she didn’t want to become an assassin (and so her heart wasn’t cold at all), she only wanted to have the power to defend herself and even the ones that can’t protect themselves, she wanted to take control over her life in the only way that she could. Stripping away what she has been taught, all she really needed was someone to heal all those bruises left on her soul and maybe she found the perfect person to do that.

Grave Mercy is a story full of mystery, betrayal and ultimately love; and I hope that you will enjoy it at least as much as I did!