When Sybella arrived at the doorstep of St Mortain half mad with grief and despair the convent were only too happy to offer her refuge – but at a price. The sisters of this convent serve Death, and with Sybella naturally skilled in both the arts of death and seduction, she could become one of their most dangerous weapons.

But her assassin’s skills are little comfort when the convent returns her to the life that nearly drove her mad.

Her father’s rage and brutality are terrifying, and her brother’s love is equally monstrous. But when Sybella discovers an unexpected ally she discovers that a daughter of Death may find something other than vengeance to live for… 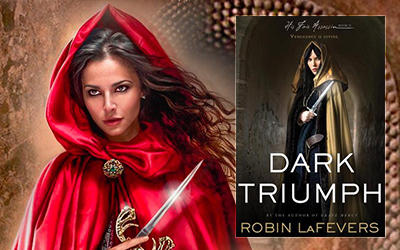 This is what an assassin’s story should look like, this is what I expected from the assassin-nuns concept I’ve been sold the first time around 😀

DARK TRIUMPH is one of the best sequels out there, as it takes the story further and so it develops into something wonderful, something beautifully dark.

“It is a good thing I no longer have a heart, because if I did, it would surely break.”

Less political compared to GRAVE MERCY, but just as captivating, DARK TRIUMPH takes its readers on a ride full of adventure and suspense, of deception and lies. And not only is it filled with action and assassin missions and strategies, but we also get a few glimpses into the lives of some of our beloved characters from the first book. There is a bit of mystery that keeps the reader going through the story but what really won me over were the killing skills and the strong wold building – and I actually like it when authors take liberties in order to make the story more intriguing, more action driven, with all the details accounted for in the end.

As many people have mentioned before, this story feels a lot more personal because of the nature of Sybella’s mission. Driven to the border of madness by unimaginable horrors endured at home, Sybella finds refugee on the monastery and for a while she finally feels at peace. She is trained in the deadly arts and she becomes really good at it, as not only does she lack hesitation towards killing when ordered, but she actually enjoys it as it gives her plenty of control. She becomes a master at hiding her fears, she is dangerous with most weapons, especially knives, and the one thing that keeps her going is her need for vengeance, her longing to put an end to the man who has made her life a living hell – her father (an absolutely disgusting character, a true monster, one of the worst villains out there).

But deep down she is a tortured, broken girl full of anger and despair, searching in vain for the saint’s guidance. Despite her strong spirit and her ability to kill without effort, she is still haunted by her brutal, tragic past. So when she is sent back to her damaged family (with D’Albret – the monstrous father, and also Julian – the incestuous, messed-up brother) all she relies on is the promise that she will get her revenge. She keeps hoping to find the marque on the man that made her life a nightmare (and not only hers), but that exact order never comes; and instead of delivering his death, as promised, she receives other orders and she is even instructed to set free a prisoner from the dungeons.

With her patience running low, Sybella drags out of prison a mortally wounded knight, and somehow she find herself kidnaped by him in return. After this, everything starts to spin out of control, her faith starts to shake even more and step by step she gets to make her own choices about who lives and dies. And because the story wouldn’t be complete without a bit of romance, Beast and Sybella find out that they have many things in common and that they complete each other – in fact it feels like they’ve been broken into imperfect pieces that fit perfectly together.

“Hate cannot be fought with hate. Evil cannot be conquered by darkness. Only love has the power to conquer them both.”

To be honest, with her not being your average damsel in distress and him being no charming prince, at the beginning I was having troubles imagining a love story between them (I blame it on the fairytales I’ve been sold all my life). But these two broken (though lethal) people shared a strong love for killing, they bonded over their tragic pasts, and slowly they got to understand each other, even to accept and respect each other’s ways. Their love wasn’t instant, it actually developed over time and it felt natural, even beautiful. I can’t say that it was based on trust, but maybe on faith – they were alike, had a lot suffering hiding under their composed appearance, and they enjoyed killing – though in the name of justice.

I understood Sybella, her pain; why she kept her secrets, her shame; why she was so sorry for not helping Alyse and being mean with her at times. I liked that Beast knew that people have to fight their own battles, that Sybelle was well capable of holding her own, and so he tried not to be overly-protective.

It is true, the Beast of Waroch is by far not your typical dashing love interest – though he has a big heart and a charismatic & compassionate personality (bringing even quite some humour into this dark story) he is described as large, scary and even ugly man. Yes, he is really easy to like with his wittiness and his loyalty, but you need to get to actually know him first, which is no easy task. But as much as my heart hurt for Sybella and her past, his story (and his sister’s) got to me deeply too. I discovered his softer side and I was really touched by it. I wanted them both to find the peace of mind they so much needed.

I will leave you to discover what the story is about, but there are some other characters that I should mention, like Ismae and Duval – I loved to see them again. Also there is the brother, Julian whose mind was just as twisted by the monstrosity of a father that he had, if not quite a lot more. Not all the things he did can be justified, but he did redeemed himself just a tiny,tiny bit by the ending.

All in one, DARK TRIUMPH was an absolute delight. I loved this story and I can’t wait to read the next book in the series, which I assume that will be just as great.