This is How it Happened

When Genevieve Grace wakes up from a coma, she can’t remember the car crash that injured her and killed her boyfriend Dallas, a YouTube star who had just released his first album. Genevieve knows she was there, and that there was another driver, a man named Brad Freeman, who everyone assumes is guilty. But as she slowly pieces together the night of the accident, Genevieve is hit with a sickening sense of dread—that maybe she had something to do with what happened.

As the internet rages against Brad Freeman, condemning him in a brutal trial by social media, Genevieve escapes to her father’s house, where she can hide from reporters and spend the summer volunteering in beautiful Zion National Park. But she quickly realizes that she can’t run away from the accident, or the terrible aftermath of it all.

Incredibly thought-provoking and beautifully told, Paula Stokes’s story will compel readers to examine the consequences of making mistakes in a world where the internet is always watching…and judging. 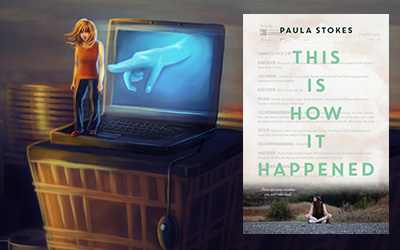 It pains me to give such a low rating to this book, because – even though I did not enjoy the storyline and the main character as I should have – the message behind this book is incredibly powerful and important.

We live in a world where people hide behind their keyboards, throwing hate around like knifes. They cut deep into people’s hearts and minds without giving their actions a second thought. 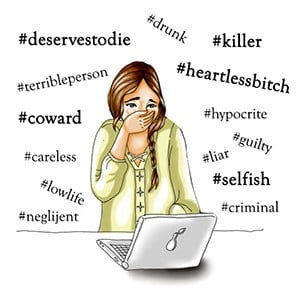 They are not held responsible for what they write and they think they are free to let it all out, so they simply don’t care about the outcome.
And they hurt, they hurt badly, just because they can.
But that’s not what freedom is.
You can be just as free without hurting everyone around. Without poisoning someone’s mind, without killing someone’s soul.

I’ve seen it in so many comments on the internet, even in the reviews (or particularly), there is so much anger and hate, there are so many mean people around. It saddens me really.

I am no innocent here, don’t be fooled, I’ve wrote a couple of reviews I am not actually proud of, but for the very same reason I stopped doing so… Because one has the right to dislike and to be upset, but does not have the right to be mean.

And I’ve been judged both by readers and publishers for choosing not to review the books I don’t like (well, with very few exceptions, lately close to none). They said I am not impartial, that it looks like I enjoy all the books I read, which is completely untrue (as you can see on my Goodreads page that). Anyways, this is why I do it.. Because words are smooth but also sharp, they can fill you with delight, but also with despair. And if I might not say them wisely, I prefer not to say them at all.

So be wise, my dears, you never know just how much pain you can cause with just a few simple words.

So why didn’t I enjoy this story?

It’s because the main character gave the storyline away too soon.
I did know from the synopsis what the book was about, but I wanted for the main character to uncover the mystery step by step. There was also a lack of emotion in her awakening, and she took the other driver’s side from the very beginning, though I felt that she should have been confused and hurt and somehow damaged by the experience.

I also felt disconnected with the “past” storyline – she made a decision, a big one, but she still pointed her finger at something that she could not easily forget. Somehow it felt unfair, even under those circumstances.

And what I couldn’t forgive her for was how cowardly she kept everything to herself, because it felt safe for her to hide in the shadows. Because she understood the magnitude of that particular hate I was talking about in the beginning. Add to this a few judicial elements that didn’t feel realistic enough to me and here we are.

But as I said, I did find the main theme to have a lot of value.
I do think that people should pay attention to this sort of situations. Things escalated quickly and unfortunately that happens in real life too. People need someone to blame, and – oh! – how they blame, with the power of hurricanes.

This is How it Happened
Expected publication: July 11th 2017 by HarperTeen
ARC received for review. Thank you!

Top review imagery: cyberbullying by dolcecaramella.
The image used inside the post it’s based on a graphic found on the internet, source unknown.

2 responses to “This is How it Happened”