Charlotte Davis is in pieces. At seventeen she’s already lost more than most people lose in a lifetime. But she’s learned how to forget. The broken glass washes away the sorrow until there is nothing but calm. You don’t have to think about your father and the river. Your best friend, who is gone forever. Or your mother, who has nothing left to give you.

Every new scar hardens Charlie’s heart just a little more, yet it still hurts so much. It hurts enough to not care anymore, which is sometimes what has to happen before you can find your way back from the edge. 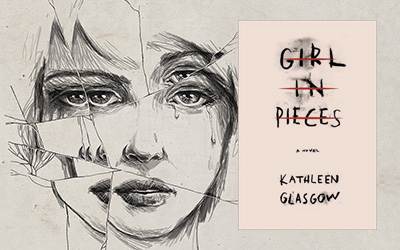 There are books that need to be written. For us to be able to understand, (or) to heal our own wounds, (or) to let us know that life goes on. There are words that need to be said, that are stuck in one’s throat, threatening to choke him/her if there’s no one there to hear them.

GIRL IN PIECES it’s a story for all the broken hearted, for all those trying to stick back together their own broken pieces, for those who know that pain comes in many shapes and sizes, but also for all who want to listen and to understand their struggle. It’s for those people who fight the pain inside-out, for those who change one suffering for another, for those who have their despair tattooed on their skin, but also for the ones who can not understand it… yet. GIRL IN PIECES is an homage to the lost battles against life, but also to the ones that have been won.

I’ve actually got the Romanian edition, and the cover is to die for. Absolutely stunning! It fits so well the story and I can imagine Charlotte drawing her own pain in a similar way. 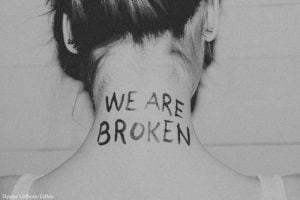 The book is written like a journal, giving an intimate vibe, the chapters feel like pieces of memories scattered around the pages. The action is taking place after some of the more dramatic moments have passed, so the reader can feel the emotion without becoming too overwhelming.

There’s enough pain and despair woven into the story though, and it’s easy to understand how lonely and helpless Charlotte feels whenever her hopes crash and burn. She’s struggling to keep control, not to get lost in her suffering and it was hard to witness the never-ending disappointments that mark her life.

It’s not easy for her to endure it all on her own. Trying to resist the temptation to erase one pain with another turns into a constant battle. Each minute is a small victory, but it doesn’t seem like one when she has to find the means to survive in this cruel world. She might take a step forward, but sometimes she’s forced to take a couple backwards too, all while she bears the weight of her own memories.

At times I could empathise more with the side characters, rather than with Charlie. Her story should have been more heartwarming, but with all those very sparse bits of memories the connection was lost on me somewhere in between. I also felt like the author tried to fit too many issues in one book: abuse, self-harming, suicide, rape, alcoholism, drug use. It was too much and none got enough page-time to be worth bringing in after a while. 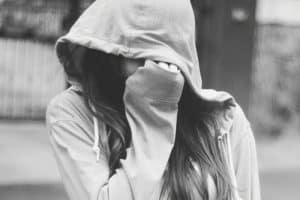 The love story was unnecessary and also too messed up. That was probably the whole point, but I did not enjoy it for various reasons. First of all because the message should have been that scarred people are worth loving just the way they are. They do deserve to have their pain taken away, they do deserve to be taken care of. Also because the story was incredibly messed up without adding to the pile anyways; why mess it up even more? And because there were a couple of moral and legal issues regarding it that were not addressed in the end.

With all those ‘friends’ why would she ever need enemies? I don’t remember one friendship worth having in this book (her best friend lied to save herself from troubles; other two friends tried to help her but not without a cost; even Michael helped her for a while and then vanished – though I think I understood why; as for her latest best-friend, God how much I hated that girl!). They felt one-dimentional and still managed to surprise me when their personalities morphed in a matter of pages. 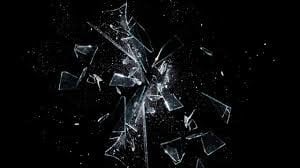 And what about the parents and the adults in general? I simply could’t believe how delusional, abnormal and insensitive they were. It made me want to throw the book across the room. I am unsure who was the worst: that poor excuse of a mother, or that terrible choice of a boyfriend. Not to mention those other monsters she encountered on her way. I have no words left to express my disgust.

Watching Charlie make a life for herself was hard at times. She had to fight both against herself and the society, with all its shortcomings: the hunger, the lack of money, the solitude, the fears, the doubts. She had so much sorrow inside, it’s a wonder it didn’t start pouring through the cracks in her skin.

I’ve had a love-and-hate sort of relationship with this book, but I know that such books are needed. Because people need to understand what hides behind the wounds on someone’s body, people need books that show the other side of life: the one full of despair, of darkness, of self-harm. They’re especially needed for creating a more forgiving, more tolerant society that can be ready to help if not heal. This is why I rounded up the initial 3.5 stars rating.

Book source: Romanian edition provided by the publisher – Storia Books.
Thank you so much, it looks just as beautiful on paper!

Picture taken by myself. Drawing by skelet1c on DeviantArt.
The Romanian review can be found here.

One response to “Girl in Pieces”