“My name is Tegan Oglietti, and on the last day of my first lifetime, I was so, so happy.”
Sixteen-year-old Tegan is just like every other girl living in 2027–she’s happiest when playing the guitar, she’s falling in love for the first time, and she’s joining her friends to protest the wrongs of the world: environmental collapse, social discrimination, and political injustice.
But on what should have been the best day of Tegan’s life, she dies–and wakes up a hundred years in the future, locked in a government facility with no idea what happened.
Tegan is the first government guinea pig to be cryonically frozen and successfully revived, which makes her an instant celebrity–even though all she wants to do is try to rebuild some semblance of a normal life. But the future isn’t all she hoped it would be, and when appalling secrets come to light, Tegan must make a choice: Does she keep her head down and survive, or fight for a better future?
Award-winning author Karen Healey has created a haunting, cautionary tale of an inspiring protagonist living in a not-so-distant future that could easily be our own. 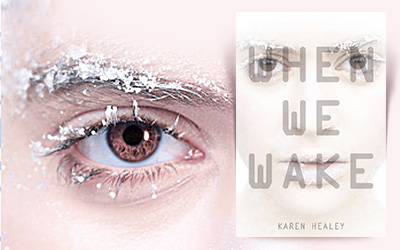 This is a lot of rambling instead of an actual review, but I wanted to put on (oh well) screen some thoughts before I get to read other books and forget about this one.

So.. the truth is that the story had a lot of potential – I did enjoy reading it and I think that many people might love it, but for me it didn’t stand out from other dystopia (/mild sc-fi) books I’ve read.

I liked the main character as she didn’t ‘transform’ somehow over night to have different abilities that might help her, in fact she was quite consistent through the story and she questioned the world in which she woke up from the very beginning.

The romance was not at its best – I would prefer to be loved for myself not for my resemblance with someone else – and the characters didn’t seem to have much in common or to know each-other well enough to actually care (in fact the boy didn’t care much, but at some point he just had a change of heart and boom, there was romance involved).

The world building needs a bit more work and some more explanations (maybe the next book in the series will enlighten us). I didn’t question it but I wasn’t fascinated by it either. Future is something that I would want to know more about and I assume that many other things would have changed in all this time, but we didn’t find much about them.

Also, at the end of the story I really had no idea who the bad guys really were (or if they were really that bad).
It’s not like I approve on what they did, but they don’t seem that ‘mean’ to me either. I guess that when in comes to protecting the species some things get a bit more complicated than “good vs bad”.
And I don’t see how their plan (view spoiler) with the frozen bodies might work. (view spoiler) So, those people will wake up in a new foreign world, I assume, and then.. what?
And do they know what will happen to them?
And who will wake them up anyways? I have so many questions and I am not sure I understand what was really happening in there. The focus remained on how people ‘should know’ some things that i won’t talk about here because they are spoilers, but then again the information didn’t have much meaning for me because I am not sure what could it possibly change in the world (a change in good, that is (view spoiler) , because all I see at the end of the book is a bit of chaos. Shouldn’t they have a real plan, find out some more about that ARK project and what it was meant to do, etc before making that confession? )

So I guess that the problem I had with this book is that I simply didn’t really get it.
Don’t know where it is headed, don’t really see the point of what was happening – it just seemed like some impulsive act that might not get the characters anywhere good.

I was sorry for Tegan (is this an usual name for you? because for me the names from the future felt a bit strange – and it made sense to have new names in that futuristic world, but this one seemed just as unusual), but also I couldn’t get past the fact that she was considered property of the military (or whomever owned her body), as alive as she was. I understand her need to be herself again, but I don’t blame the others either because, you see, she gave herself away. So this is a bit complicated too.

Anyways, I hope that you’ll enjoy this book. I focused on the things I didn’t understand but it’s not a bad book (at all) and you might enjoy all that action.
Also I liked how the main character seemed to talk to us (assuming that we were from the future) and how she explained everything to us. It felt more personal somehow and it made me even smile sometimes (you will see why). The first half of the book was my favorite, but I hope that you will enjoy it all even more than I did.

8 responses to “When We Wake”