Grace wants out. Out of her house, where her stepfather wields fear like a weapon and her mother makes her scrub imaginary dirt off the floors. Out of her California town, too small to contain her big city dreams. Out of her life, and into the role of Parisian artist, New York director—anything but scared and alone.

Enter Gavin: charming, talented, adored. Controlling. Dangerous. When Grace and Gavin fall in love, Grace is sure it’s too good to be true. She has no idea their relationship will become a prison she’s unable to escape.

Deeply affecting and unflinchingly honest, this is a story about spiraling into darkness—and emerging into the light again. 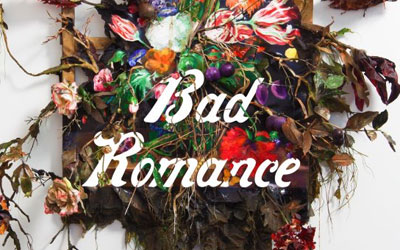 I am confused by my (highly conflicting) feelings about this book.

In a way, stories like Bad Romance are vital in a (bookish) world were dysfunctional relationships are usually promoted. Too many other YA/NA books present us with overprotective, possessive, controlling and even abusing characters, and they try to paint them as such wonderful romantic stories (they are purposely misleading young readers into believing that is what a relationship looks like), while in fact they truly are not, in the least.

No matter how I look at it, things like the ones presented in this story are REAL (which seems faraway and strange to most of us, then again there are even countries where it is legal for the husband to beat his wife *sigh*) and young people should know how to distinguish between a healthy relationship and a toxic one.

Manipulative gestures are not romantic, that’s the end of it.

But the way the story was presented…
Hmmm. Where do I start?

Gavin.
I didn’t actually ‘feel’ manipulated by Gavin, not for one bit. Not sure if anyone was. Maybe because we know that things are supposed to end badly. I for one didn’t feel like investing much energy into rooting for the couple when they were doomed from the first page anyways.

But also… He tried to (view spoiler) kill himself!!! in the beginning of the book, at the end of another relationship, so if that wasn’t enough of a hint, I don’t know what else could it have been.

Gavin was playing hot and cold all the time, but then again I never felt their chemistry in the first place – so when things started to go wrong, I didn’t feel trapped into the story and I didn’t feel like Grace was either. The change in him was indeed as gradual as it should have been, but I felt like something was missing.
Of course, it’s one thing to experience something horrible like this and an entirely different thing to just read about it, it might be plausible in a way I can’t yet comprehend. What I am saying is that it just did not feel like that from my perspective, that’s all.

Grace.
She was a TROUBLED girl! Thinking that it was kind of sexy and romantic when Gavin tried that trick in the beginning? Seriously?! And BTW, I’ve wondered why didn’t she ask the ex about what happened – maybe not right then, but while things progressed.

Anyways, I will say it once again… Grace didn’t seem trapped to me, just highly undecided. Even in the beginning of their relationship for a second she would think things were strange, that they didn’t seem to be working as a couple after all, that she wasn’t quite happy with him and that it felt good to take a break when he left for holidays (though I think they were on good terms back then), but then dismiss them all in a blink and keep going, trying to convince US that there was more to their relationship than physical attraction and teenage obsession.

Of course, when the emotional blackmail came I understood how torn she was (I understood also how she always focused on the good and tried to forget the bad), but it was a bit late, I did not get how things lasted that long.

Family.
Dear god, I wanted to murder someone. In this, I do understand how someone could choose an unhealthy relationship to escape such a CRAZY home. It was horrible in such a heartbreaking way. It left me confused and angry and aching.

Her best friends.
They were supportive and I was cool with that, but they were pushing her so hard into a relationship with Gavin in the beginning, and then they started doing the same once more (view spoiler) with Gideon (while Grace was still in a relationship and it was clear that she didn’t need another romance to mess with her head, only some time alone to figure things out for herself) while trying to convince her to break up with her boyfriend each time they opened their mouths. It was a tiresome act, honestly, and it rubbed me the wrong way.

I think that in real life if they did something like insisting this much for the girl to break up with someone like Gavin, the girl would end up alone because the very manipulative asshole boyfriend would find ways to make her loose contact with them or the girl would start keeping the distance for – I don’t know, maybe – shame, or because she wouldn’t see things from their point of view, or for so many other reasons.. Just saying. It’s tricky to be friends with someone in this sort of situation, to try to help but to not overstep the boundaries. And they did a lousy job at it.

Gideon.
I hated his tiny involvement in the story for various reasons.
(view spoiler) #1 I wanted Grace to understand how awful her relationship was without another guy in the mix. But I assume that girls might realise this sort of things when someone better comes along, showing how normal relationships should feel like (even though what they had was pretty much friendship).
#2 He seemed like another – more polished – version of Gavin.
He was extra sweet and flirty at first, and then became a bit pushy with the letters and the “break up with him” repeated tune. Sounds familiar? Also, am I the only one thinking that him being into acting and a bit of music felt creepy in this context?


Anyways…
I expected more from this story. I expected to be invested in their romance. To fall madly in love along with Grace (she was obsessed with Gavin way before the story stated, so I was spoon-fed this romantic endeavour and didn’t get the chance to enjoy it properly), to feel the shift slowly (it was too obvious and I started way to soon to wonder why in the world didn’t she break up with him?), to feel broken inside bit by bit (but instead Grace was mostly the same trough out the story and so was my indifference). To feel something towards this story other than confusion, for crying out loud.
Anything.

It was entertaining, I’ll give it that, but I just wasn’t emotionally invested.

Though I do hope that this book will be as useful as intended, that it will raise awareness and that all the Graces (and Gavin’s) out there will benefit from it. 😉