It’s been three years since the devastating accident … three years since Mia walked out of Adam’s life forever.
Now living on opposite coasts, Mia is Julliard’s rising star and Adam is LA tabloid fodder, thanks to his new rock star status and celebrity girlfriend. When Adam gets stuck in New York by himself, chance brings the couple together again, for one last night. As they explore the city that has become Mia’s home, Adam and Mia revisit the past and open their hearts to the future – and each other.
Told from Adam’s point of view in the spare, lyrical prose that defined If I Stay, Where She Went explores the devastation of grief, the promise of new hope, and the flame of rekindled romance. 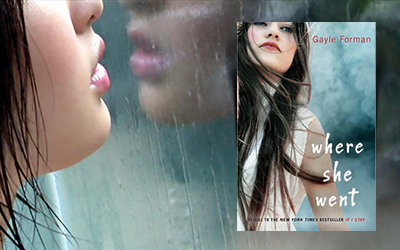 When I found out that this book will be all about Adam I was absolutely thrilled.
To be honest, I liked better his point of view, his stories, the way the accident changed his life, his personality and more than that I liked the way the author had portrayed ‘fame’ and the way it changed Adam.

It felt like a realistic scenario even though I couldn’t know for sure. It must be is hard for someone simple like Adam to be the center of the gossips in the magazines, to be watched 24/24h, to have analyzed every single move.. every single word or action to be interpreted. It was hard to see his phobia grow stronger, and it was heartbreaking to see how alone he was, how alone he felt each and every moment. His emotions can easily live one breathless.

“You crossed the water, left me ashore
It killed me enough, but you wanted more
You blew up the bridge, a mad terrorist
Waved from your side, threw me a kiss
I started to follow but realized too late
There was nothing but air underneath my feet”

At a first glance you might think that the fact that Mia left is the main reason that he is so miserable, but I was glad to find out that there was more to his story.
I didn’t see this book as a new addition to the first one, I felt like this was part of the same story. It was like this was the other half of the same book, the one I always wanted to read: Adam’s POV.

The best part of the book was probably the beginning of the chapters holding the lyrics of the songs he wrote. It was the best way to portray the way he felt after being left behind.

I still can’t understand why did he love Mia so much (the more I knew about her and what happened, the less I liked her and the more I think that she was being selfish all the way), but I could feel Adam’s pain, I could see how much it hurt to even think about her, I could see how hard it was for him to let go of all those memories and give himself the right to love again, to live again .. because he saved Mia but he also took her place. He suffered the pain of losing her (again) and for 3 years he was all alone, with a broken heart and one question without an answer: Not “where”, but “Why?”
He never got the chance to choose (like Mia), he never got to ask her questions, he never got the chance to make her change her mind… he didn’t really know that it was over – he could have handled being over, is just that he simply could not handle not knowing.

Add to this the fact that he had a famous girlfriend, that his band was so popular that paparazzi were following his steps day and night (wanting to know more about him, his past, his ‘dark’ period and even his relationship with Mia), also the fact that he was losing all his friends because of the fame, and you will see why his life was so damn depressed.

One more thing to add: the ending was not that great, but somehow it suited the story anyway. 🙂
…And I know that I didn’t say much about the story itself, but I think that it is better for you to read it on your own 😉