Everybody knows Cate Cahill and her sisters are eccentric. Too pretty, too reclusive, and far too educated for their own good. But the truth is even worse: they’re witches. And if their secret is discovered by the priests of the Brotherhood, it would mean an asylum, a prison ship—or an early grave.
Before her mother died, Cate promised to protect her sisters. But with only six months left to choose between marriage and the Sisterhood, she might not be able to keep her word… especially after she finds her mother’s diary, uncovering a secret that could spell her family’s destruction. Desperate to find alternatives to their fate, Cate starts scouring banned books and questioning rebellious new friends, all while juggling tea parties, shocking marriage proposals, and a forbidden romance with the completely unsuitable Finn Belastra.
If what her mother wrote is true, the Cahill girls aren’t safe. Not from the Brotherhood, the Sisterhood—not even from each other. 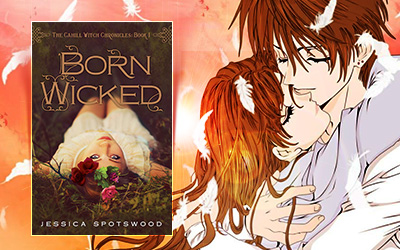 This is bit of a magical story about witches in a very difficult time – when they are hunted down, when they have to hide, to pretend to be ‘normal’ and not draw any attention to them. It’s a story about a young girl that needs to protect herself and her sisters from all the dangers that might break them apart, a story about young love and old prophecies, and everything in between.

THE COVER
… isn’t it beautiful? I mean, I am not sure of the relationship with the book, as the girl’s dress doesn’t match the era from the story, but I think it’s beautiful nevertheless. From the very first time I saw it I knew I wanted to read this book and I was more than happy to see how much I liked it.

Cate
The story is told from Cate’s point a view. She is a young lady that has to watch over her sisters (Tess and Maura, both younger than Cate), all of them being witches, but not all of them being OK with the fact that they have to hide their powers. Cate needs to make a decision in order to keep her sisters safe; she needs to decide her future and maybe theirs as well.

Her sisters
The sweet an obedient Tess is the youngest and, even though she barely got her powers, she is really talented. I liked the relationship between her and Cate – they helped and understood each other and there wasn’t anything in the whole world that they wouldn’t do to protect the other.
Maura is a bit different – she is more rebellious, she doesn’t like to take orders and she is proud of being a witch (as she doesn’t see it like a curse at all). She wants to know more about what she could do with the power of her mind and she doesn’t want to waste this gift by hiding.

The mother
There where many things I wondered when it came to the mother. The first one is why didn’t she give Cate more advices, why didn’t she help her in any way she could. You might say that the journal was enough but it wasn’t. It was this big mystery that couldn’t be uncovered properly.
Also, why the insistence to have another baby and risk her life, leaving her daughters unprotected? She didn’t trust her husband enough and I am not sure how much love could have been between them, so I just hope the reason was good enough to be worth dying for.

The father
He was mostly absent so I didn’t get what was his role in the story. I resented him for being so clueless and for not caring about his own daughters and I resented the way Tess was suffering because of the lack of affection from his part.

THE LOVE STORY
Love is a big part of the story but the heroine had her priorities straight. She put her sisters first no matter what; she was selfless and would sacrifice everything for her sisters.

You know how I don’t enjoy love triangles but in this case it worked just fine. I mean, Cate’s heart belongs to only one guy; the problem was that he was not ‘good enough’ in the eyes of the society she was living in.
It was a tough decision for her to make as both guys seemed to care about her, to understand her in some way, both guys wanted to make her happy. But happiness is hard to be achieved when it depends on too many people, in fact when it depends on the others and not on yourself.

Now that I think about this, I guess I wanted more time with the boys, to get to know them better, because this part of the story was a bit rushed. But there were some cute scenes involving the 3 of them (together or not) and I found myself smiling a lot and caring about Cate’s decisions.
Also there were some big mistakes that she made and I can’t wait to see how will those affect the action in the second book.

THE WORLD SETTLING
I loved this ‘New England’ with the Brotherhood so controlling and the Sisterhood a bit mysterious in it’s acts. I loved to read about the prophecy, about how one of the 3 sisters might change history, and I love to read stories from the 19th century, as (like I said) there is something magical about that period. I still wonder why the Brothers didn’t come for Cate or her sisters like they did with other girls (was it because of their father, or was it in their plans to do it in the future?), but as I see things now, I am not sure if I’ll get my answer.

THE ENDING
I can’t say that I didn’t see it coming somehow, as everything that happened pointed to that direction, but there were some things that took my by surprise. It is a bit of a cliffhanger and it made me want to wish for the next book to be published really, really soon.

I hope you will enjoy this book as well. Happy midnight reading everyone!