Becca Chandler is suddenly getting all the guys – all the ones she doesn’t want. Ever since her ex-boyfriend spread those lies about her. Then she saves Chris Merrick from a beating in the school parking lot. Chris is different. Way different: he can control water just like his brothers can control fire, wind, and earth. They’re powerful. Dangerous. Marked for death.
And now that she knows the truth, so is Becca.
Secrets are hard to keep when your life’s at stake. When Hunter, the mysterious new kid around school, turns up with a talent for being in the wrong place at the right time, Becca thinks she can trust him. But then Hunter goes head-to-head with Chris, and Becca wonders who’s hiding the most dangerous truth of all.
The storm is coming. 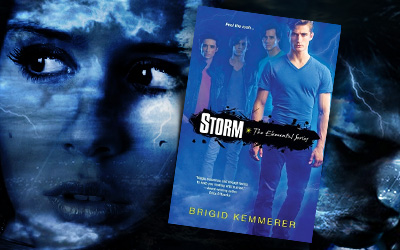 I had my eyes on this book for a while because most of my friends have read it and loved it, so when I got a copy of Spark (the second book in the series) for review I thought that it was time for me to start reading this series too.

Don’t be fooled by the 3 and a half star-rating, the book is quite good and if you don’t usually over-think the paranormal worlds (like I seem to do) you will definitely love it more.
This is a refreshing story about 4 boys with powers way too strong for their own good and also a story about a girl caught in the middle of a fight beyond her power of comprehension. This is a story about revealing secrets that could kill you and about love that could heal you, it has a lot of action, a bit a drama, some humor scattered here in there, not to mention that there is plenty of hotness involved. Be aware!

The concept.
If I remember Captain Planet, am I a bit too old?
Well this book reminded me of that cartoon movie series and I’ve always liked the idea of one controlling the surrounding natural elements, the idea of them giving you power, the idea of that power consuming you.. Yeah, I am talking now a bit more about Chris’ brothers than himself, but in this story they come all in one package and some of them will steal your heart with their humor, or their drama, or them both.

The characters.
When you have 5 hot guys parading (is this the right word?) in front of you, you just got to be enjoying yourself.. a lot!
I loved the teasing between the brothers and Chris when we started to see Becca, I loved how they stood for each other even when they disagreed with what one was doing, I loved how they wanted to fight back and not keep their head down because that wouldn’t solve anything and they would be bullied again and again. Yeah, sometimes the overprotectiveness was getting on my nerves, but this is what loving your younger might do to one (I have a younger sister and I like to think that I would do everything to keep her out of trouble, even though it’s not the case).

The writing.
The is something melodic about the way Brigid writes. It captivates you and makes you want to read more, to know more, to see what happens next.. You simply can’t put the book down. I’ve been reading on the train, on a bus and a boat, and it’s funny because i usually get motions sick if I read in a moving vehicle, but I guess that the story was way too interesting for my brain to think of something else.

The fake love triangle.
When you have alternating povs from two main characters things are clearer than bottled water. And when you have a cute relationship that starts pretty well, but you know with whom the girl might end it leaves you with a bitter taste.
I am not a big fan of paranormal love stories and this one was no exception. I don’t understand why did the two liked each other, and i don’t understand why the third one got to be left out when he started so damn well, I don’t know why there was a need for a love-triangle in the first place, and I don’t get how Becca ended with the one she ended because not only there was no chemistry between them, but it was the same treat-me-like-hell-because-i-like-you story all over again.

The paranormal elements.
There were things that didn’t make much sense, mostly by the ending. We started to understand many things, but as a paranormal world goes it wasn’t really enough.
Making storms out of nothings is something, but changing the course of life is an entirely different thing, and no-one seemed to be bothered by this. (And the same goes for the next book and there are still no consequences!)

Also there were some disturbing things left hanging… Again, i know this is paranormal fantasy, but young people are reading it. Don’t make them think that if someone tries to rape you is alright for you to hide it. Make them fucking pay for it! It really annoys me that something this important is treated so lightly in YA books.

With the good and the bad, I really got to like the story, enough for me to want to read the next ones (I am including here Spark that comes next this month and also Elemental, a short story about the oldest brother). Keep an eye for this series because I bet that many of you will like it as well!