Cath is a Simon Snow fan.
Okay, the whole world is a Simon Snow fan . . .
But for Cath, being a fan is her life — and she’s really good at it. She and her twin sister, Wren, ensconced themselves in the Simon Snow series when they were just kids; it’s what got them through their mother leaving.
Reading. Rereading. Hanging out in Simon Snow forums, writing Simon Snow fan fiction, dressing up like the characters for every movie premiere.
Cath’s sister has mostly grown away from fandom, but Cath can’t let go. She doesn’t want to.
Now that they’re going to college, Wren has told Cath she doesn’t want to be roommates. Cath is on her own, completely outside of her comfort zone. She’s got a surly roommate with a charming, always-around boyfriend, a fiction-writing professor who thinks fan fiction is the end of the civilized world, a handsome classmate who only wants to talk about words . . . And she can’t stop worrying about her dad, who’s loving and fragile and has never really been alone.

For Cath, the question is: Can she do this?
Can she make it without Wren holding her hand? Is she ready to start living her own life? Writing her own stories?
And does she even want to move on if it means leaving Simon Snow behind? 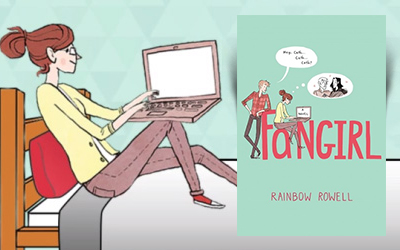 This book scared me.
There were so many quotes in it that seemed copy-pasted from my own life, like this was some sort of fan-fiction about myself. I saw myself in this girl even though we do different things, make bad decisions but in totally different scenarios.. really, it’s scary. Because you see, I still think that this girl is boring, and now I can’t shake this feeling that, in a way, I might be boring too.

I was never a big fan of fan-fiction. I lose interest so quickly and I don’t trust other people with my favorite characters – maybe I’d read for a bit, let myself be entertained for a while, but then I would get to the point when I would think: [insert character’s name here] would never say that, or do this; this wouldn’t possibly happen in this world.
So this me, not a fan-fiction fan.. I’ve never been, at this point it’s quite impossible for me to ever become one. And I can’t write, so there’s not even the chance of me to use those character in my own way.

But, back to the book because we already figured that I am quite boring (rambling include):

What I liked the most about FANGIRL is the dynamics between the characters: Cath’s relationship with Nick, with Raegan (her roommate), with Levi (which might or might not be one of Raegan’s boyfriends, and whom might or might not like her back), with Wren (her sister who used to share her passion for Simon stories), with her mother (that one day decided that she was too young to have kids), her father (with whom she had a lovely relationship), with her teacher (that saw the talent in her and wanted to expand her horizons).. is there any relationship in this book left aside, or not having some over-the-roof importance?

The dialogue was hilarious, believable, and it never made me cringe (which might not say much, but when it comes to YA stories it’s such a big plus), the writing was beautiful and clever and I also found some tiny little pieces of me hidden between the lines. To be honest it won a full star simply for that.
On the other side there was this big minus: Cath did nothing to help herself through her misery. If it weren’t for other people that tried to talk to her, to spend time with her, to make her smile.. well, her life would have been so dam sad.

I got angry at her, I wanted to scream at her: get out, live your life! Do what you have to do, that silly story is not the only thing important in life, you know?!
But she never, ever listened! Damn, stubborn girl!

Then again, what was that fan-fiction about? It felt like a combination between “Harry Potter” and “Twilight” (or was that only my imagination?) – anyways, not a hit on my side. But near the ending I found myself attached even to those awkward characters, so much for keeping away from fan-fiction.

I won’t speak about the story itself, as sometimes it is better to go blindly into a book, but another thing that was quite cute is the romance. I liked both characters, their shyness and the friendship, the confusion, the awkwardness.. everything. It doesn’t take a whole lot of paper space (at least up until some point), but.. yeah, so sweet!

All in one a great story. Let me know your thoughts and.. Happy midnight reading!

“It’s just … everything. There are too many people. And I don’t fit in. I don’t know how to be. Nothing that I’m good at is the sort of thing that matters there. Being smart doesn’t matter—and being good with words. And when those things do matter, it’s only because people want something from me. Not because they want me.”

“Just … isn’t giving up allowed sometimes? Isn’t it okay to say ‘This really hurts, so I’m going to stop trying’?”
“It sets a dangerous precedent.”
“For avoiding pain?”
“For avoiding life.”

“You’re never going to find a guy who’s exactly like you—first of all, because that guy never leaves his dorm room.…”