Tessa has just months to live. Fighting back against hospital visits, endless tests, drugs with excruciating side-effects, Tessa compiles a list. It’s her To Do Before I Die list. And number one is Sex. Released from the constraints of ‘normal’ life, Tessa tastes new experiences to make her feel alive while her failing body struggles to keep up. Tessa’s feelings, her relationships with her father and brother, her estranged mother, her best friend, and her new boyfriend, all are painfully crystallised in the precious weeks before Tessa’s time finally runs out. 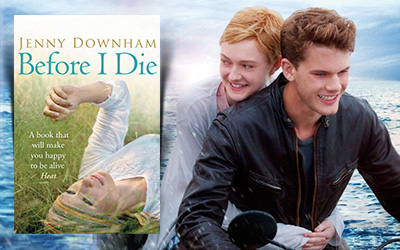 “I want to die in my own way. It’s my illness, my death, my choice.This is what saying yes means.”

I don’t really know what to say about this book. I didn’t like it that much, but I didn’t hate it either..

For the most part of the story I didn’t really care about Tessa, about her illness and her strange wishes (as I never got attached to her). I understand the desire to have a boyfriend, to be kissed and have sex, probably at her age this would be an important part of her life, but the other ‘wishes’ were kind of stupid and not the ones that someone would like to think about before dying. I just expected something else from her and I was disappointed by all this.

More than this I hated her dumb friend who reminded her every 5 minutes that she’s gonna die and who was NEVER there for her (and when she tried to help Tessa with her stupid wishes I just wanted to punch her for being such an idiot and not being a good friend at all), I hated her little brother telling her that he can’t wait for her to be gone (sometimes he seemed to be 5 years old even if we’ve been told he was older), I hated her mother who seemed not to care about her at all. Ok, so there were lots of things I didn’t like in this book.

The only character that I liked was Adam. I don’t know why he fell in love with Tessa because she didn’t even deserved it (and didn’t deserve him) and because this happened so suddenly, but he was really nice and caring. There were some scenes with him being there for her and giving her all his love that made me like him more. I felt sad for him, really, because Tessa was going to die and that was the end for her, but he will remember her all his life, he will lose a part of him forever.. so he was the only character in this book that made me care. There were times that Tessa wanted him close, and there were times when she told him to get away and never come back, but he was always there for her, never disappointing her.

‘I love you,’ he whispers angrily into my neck. ‘It hurts more than anything ever has, but I do. So don’t you dare tell me I don’t. Don’t you ever say it again!’

The best part of this book is of course the ending. All those dreams mixed with reality and thoughts, the notes for the ones she was letting behind, the people that cared for her being finally there for her, that was the only part that touched my heart, that was the only part that made me care, because death is hard even if only written in the books, death makes you cry, death makes you think about all the thing that you want to do while still alive..

SO, what’s on your list?
You never know how much time you have.. so, how many items on your list did you check so far, and how many are still waiting to be done?