Gabriel Merrick plays with fire. Literally.
Sometimes he can even control it. And sometimes he can’t. Like the fire that killed his parents.
Gabriel has always had his brothers to rely on, especially his twin, Nick. But when an arsonist starts wreaking havoc on their town, all the signs point to Gabriel. Only he’s not doing it.
More than Gabriel’s pride is at stake — this could cost him his family, maybe his life. And no one seems to hear him. Except a shy sophomore named Layne, a brainiac who dresses in turtlenecks and jeans and keeps him totally off balance. Layne understands family problems, and she understands secrets. She has a few of her own.
Gabriel can’t let her guess about his brothers, about his abilities, about the danger that’s right at his heels. But there are some risks he can’t help taking.
The fuse is lit… 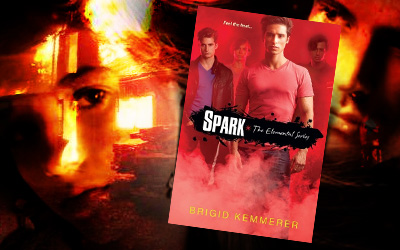 For some reason I couldn’t put this series down and if i had the next one too, I would definitely go for it this very moment. Yes you can see a whole new star over there, this means that I loved this better and that I agree with all the people that told me this story was worth reading.

Spark was quite emotional, and it kept me on the edge all the time. There were laugh out-loud moments, and heartbreaking ones, there was penty of action and the characters started to grow on me with every page, and I loved to see them gain more control over their powers.
I didn’t expect Gabriel’s power to be so consuming, but this guy was really set on fire (in more than one way)..

The main male character.
Gabriel is like fire, hot like hell but you also know what happens if you play with fire, right? I knew there should be more behind his anger and off course I was right.
There was so much tension between him and Michael, and I loved how they got to talk, to get to understand each other at least a bit more.
It was infuriating to see how Gabriel just didn’t tell the truth that would’ve made this all so much simpler, but I understand how much it must hurt for his own family not to trust him.
Also, his relationship with his twin brother, Nick, was heartbreaking. They’ve been so close, so the distance growning between them was now palpable and shaterring.

Layne.
She is really great – So different from Gabriel, but also so perfect for him: she sees through him and he sees through her and they simply match.
I liked how slowly their relations started, but still so hot and cold. I liked their notes (idea from the first book), I liked it when they really talked and started to know each other, well, I pretty much liked everything about them and every moment they had together. And there was no love triangle for God’s sake, because who the hell needs them? (Also the moments with her father were extremely funny, as infuriating as they also were – nope, I won’t spoil this for you)

Simon.
I liked how close Layne was to her little brother and how Gabriel cared for him too. I liked how he helped this boy, how he defended him. Simon was so good at sports (even with his disability) that I thought he might have a power too. Well, I guess there is still time for that.

Hunter.
Not sure why but since the beginning the was something about him that kept me on edge. With a book written from his POV and a novella pending, I guess he will always be the good guy, but I still can’t make myself trust him.
But anyways, I like the friendship between him and Gabriel, and I liked the fact that he got past the feelings he had for Becka, or so it seems.

WHY NOT 5 FULL STARS?

I couldn’t really explain it.
There were some things lacking, like the bad guys from Storm – shouldn’t there be others like them? All the sudden the comunity left them alone, and it made the whole hate from the first book seem somehow silly and less important.

Also, I don’t get the guide thingy… How could so many bad things start and no one would come clean this mess. I am on their side (don’t get me wrong) and i don’t want them to get hurt, but it seems unalistic, even with the one guide really being there.

The bad characters – I am not sure if they have a good reason for what they did. I am not talking about the one with paranormal poweres, but if i tell more I’ll ruin the surprise element in the story. Anyways it felt forced.

The guilt – this was the one thing that wasn’t touched enough in the story. Gabriel should feel more for his parents’ death and maybe it shows in the way he acts, in his anger but it was never enough.

Hmm… Now I am less sure about the half star, but I really loved this story. It was absolutely awesome and I can’t wait for the next one, even though Hunter is not my favorite character. I would have preferred Nick to be the narator, but at least we will get a novella from his POV.

Book source: Advanced copy received from the publisher via Netgalley. Thank you!