Ever since her sixteenth birthday, strange things keep happening to Seraphina Parrish.
– The Lady in Black… burns Sera’s memories.
– Unexplainable Premonitions… catapult her to other cities.
– The Grungy Gang… wants to kill her.
– And a beautiful, mysterious boy… stalks her.
But when Sera moves to Chicago, and her aunt reveals their family connection to a centuries old, secret society, she is immediately thrust into an unbelievable fantasy world, leading her on a quest to unravel the mysteries that plague her. In the end, their meanings crash into an epic struggle of loyalty and betrayal, and she’ll be forced to choose between the boy who has stolen her heart and the thing she desires most.
Wander Dust is the breathtaking fantasy that will catapult you through a story of time, adventure, and love. 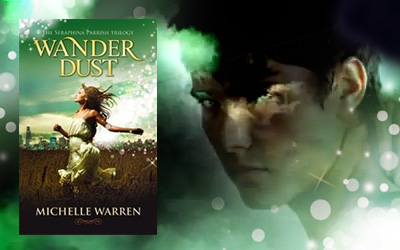 When I read a book I usually take some notes, mark some quotes, you know – the usual things you do when you want to remember what the story was about. It’s helpful if it takes you long to write the review and you read other books in the meantime.

The problem is that I didn’t find anything related to this story – not on my computer or cellphone, not a paper thrown somewhere; so I’ll need to pick up from my memory any information I can (and let’s say, I worry that my memory is not that good these days).

What I mean by this is that I might not do justice to this story, so I’ll start by saying that I liked this book a lot, and if I don’t convince you by end of this review, well, you’ll just have to read this book by yourself and see why do I think this is a such a great read.

I’ll start with the main character: Seraphina is another strong character I came across.. These days the book world has gathered many of them and I enjoy it enormously.
She has some parental issues with her mother being gone for many years and her dad not paying any attention to her, but that’s the least of her problems.
When she starts having visions of someone burning her mind she starts to think that she is going crazy. It doesn’t help that the Earth tries to ‘eat’ her alive and ‘spits’ her in another place and time, and it doesn’t help that some guys are following her and they seem to try to kill her.

The only thing that makes her feel better is the picture of a boy with beautiful blue eyes that gives her some sort of comfort, making her feel safer. When she moves in with her aunt she tries to have a normal life (a new school, a new city, everything new), but normal is a luxury she can’t afford.
Thrown into a magical new world were she finds the mysterious boy from the picture (trying to clue her in as much as he can) and finding out more about her capacity of time traveling, her life turns upside down when she realizes that she really has a chance to see her mother one more time… and what if she could even save her? The only problem is that the even the thought of it is forbidden, not to mention actually doing so.

I loved how the future became entwined in the past, and the visual effects of the moment when one could move from a time to another would make for a great movie scene. I could see the earth crashing on Seraphina the very first time she experienced time traveling (even without knowing it), and it reminded me a bit of a scene from the movie Inception. Also the school was described in a way that, as many have said it before, will make you think of a modern version of Hogwarts. Another thing that I enjoyed was the ‘travel’ to Venice for the carnival – there’s a sweet romantic scene in there, so you should watch for it.

Only one thing bothered me: the insta-love kind of relationship between Sera and Max. I still wonder how that picture got to Sera, and I still wonder when did he fall in love with her – because even though she liked him from the very beginning, we could see step by step how she started to trust him and then fall in love, but he was quite ‘fond’ of her from the beginning (and it’s not like he could see her in a time-traveling thing, like I thought at some point, because he can not time travel – he has another purpose that holds him close to Sera)

Still, I liked the relationships between the characters. If it weren’t for the ‘crazy girlfriend’ wanna be (you will know whom that is when you’ll meet her), everything would have been perfect with that amazing cast thrown in there – good guys, bad guys, I liked them all.

The book leaves us in a bittersweet place, with some things resolved, but with many questions to be answered (about the academy, her mother, the twin, and so on), so if you read this book be sure that you can wait for the next one, because you will want so very much to read it as soon as possible. 🙂